For seventy-nine recorded seconds in 1957, poet Kenneth Patchen and a group of jazz musicians achieved a perfect melding of minds and biorhythms. A few years before, Patchen had begun a series of collaborations, performing and recording with the Chamber Jazz Sextet in San Francisco, the Bed of Roses Chamber Group in Seattle, the Alan Neil Quartet in Vancouver, and the Charles Mingus Jazz Workshop in New York. These projects were successful artistically and financially. The $4,545 he made in 1959 from performance tours far outstripped any other year’s earnings. Patchen was a poet’s poet, and a favorite among musicians. Charlie Parker carried a volume of Patchen’s poems with him, and spoke lines from the poems as he played. More recently, the free jazz powerhouse, Peter Brötzmann, made Patchen’s 14 Love Poems the basis of an acclaimed solo album. Patchen’s literary fans back in the day included Henry Miller, Allen Ginsberg, John Ciardi, and James Laughlin. Even Marianne Moore was won over after attending Patchen’s show at the Blackhawk Club in the Tenderloin. Moore was surprised by the fact that “every word was audible against the music (or should I say ‘with’ it?).” Moore’s self-correction begs the question: What does it mean for a poem to be with or against the music that surrounds it? 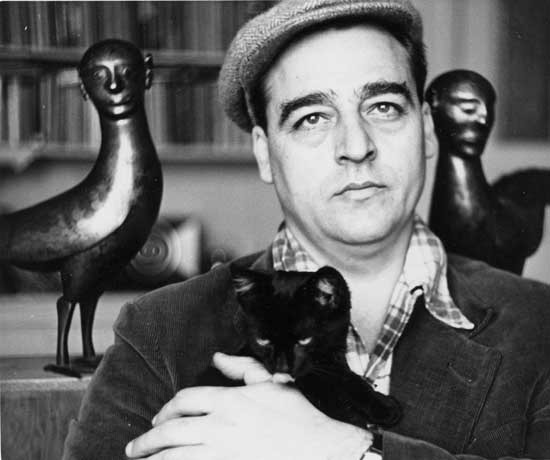 The piece in question is the first track on the first album Patchen recorded with musicians, “The Murder of Two Men by a Young Kid Wearing Lemon-colored Gloves.” It is to my mind one of the few instances of music and poetry perfectly integrated—by which I mean that in this piece, poem and music are maximally in contact, both with and against one another. This collaboration between Patchen and composer and band leader Allyn Ferguson is a revelation, anticipating Robert Creeley’s interplay with bassist Steve Swallow almost 50 years later. But where Creeley’s pre-recorded poems were digitally retrofitted into Swallow’s soundtrack, Patchen performed his poems live and in the studio with horns blazing. Listening to this deep cut is for me a continuous shock and thrill–a reminder of what’s possible when poets close their eyes and keep their ears wide open.

But first, eyes open: Patchen’s poem on the page. It appeared originally in Cloth of the Tempest (New Directions, 1942) exactly as it is reproduced on Patchen’s Poetry Foundation page. In comparison with Patchen’s other work this poem looks more like a sketch than a full-blown poem. Typographically, the layout is striking, but crude. The words hint at an encounter, but they stop well short of dialogue or plot. Why the single, surrealist detail (“lemon-colored gloves”) in the title?  Why only one “now” if there are two murders? Unaccountability rules this poem. In its whetting and frustrating of its reader’s generic appetites, the poem stages its own powers of deferral.  At the very least, and perhaps at the very most, the poem on the page is about itself.

Rereading the poem, I feel the truth of what Orlando White wrote recently about white space: that such space between text is “the vital sign of silence,” and that one of our jobs as poets is to “[make] language and silence collaborate.” White’s piece is a revamping of Charles Olsen’s 1950 manifesto, “Projective Verse,” in which Olsen offers the great formulation, “the HEAD, by way of the EAR, to the SYLLABLE/the HEART, by way of the BREATH, to the LINE,” and his idea of composing by field. Writing in the Olsen orbit, Patchen would have been hip to White’s metaphors of body and text: background as the throat of the page, the pulse of the folio, the line and its breath.

The white spaces threading Patchen’s poem stood silently on the page for 15 years, waiting like unopened invitations for someone to hear their as-yet unexpressed exhales. Ferguson answered the poem’s call, composing music that he said he hoped would “fortify the emotional content of the poetry.” Patchen’s poem grew into itself in the company of Ferguson’s band.


Ferguson’s sextet is a good example of chamber jazz, a form of cool jazz that flourished in the 1940s-1950s. Closely associated with the West Coast scene, chamber jazz developed out of the wartime recording ban and the demise of the big bands. These ensembles were characterized by their small size, unusual instrumentation (French horn, oboe, bassoon, etc.), and compositional style that incorporated the influence of symphonic music. As cool jazz was taking form, bebop was cresting, and hard bop was on its way. All of these cats were swing players as well. Six weeks after Coltrane recorded “So What” with Miles Davis in 1959–an album that many think of as the epitome of cool jazz, he threw down “Giant Steps,” single-handedly reinventing jazz improvisation. Earlier that year, Mingus’s “Ah Um” signaled a new, funkier strain of bop that honored the sounds of Ellington and gospel and New Orleans jazz.

Ferguson’s “Murder” is of this musical moment. The opening melodic line, delivered in big band-style unison by the horns, uses bebop rhythm and phrasing, although harmonically it stays in the realm of swing. Eight bars into the piece the drummer switches from Philly Joe Jones-style, swinging eighths on the cymbal to play the melody on the snare along with the horns. At this point the band divides into two sections, and counterpoint and harmony come into play. Syncopation increases as the final four phrases, delivered by the band in unison again, deflect off one another lopsidedly, pinball fashion. The band is well rehearsed, swinging easy and tight.

At the close of the first A section of “Murder,” the band cuts out and Patchen enters with the laconic announcement of the poem’s title–at a considerably slower tempo than the music that preceded, and with subtle hesitations that intimate the rhythmic play to follow. Four words into the title, the bass enters with quarter notes and then, somewhere between the end of “lemon-colored” and the beginning of “gloves,” the drummer doubles up his time, moving into the swinging eighths he will maintain through the end of the tune. As Patchen reaches the end of the title, the band resumes the upbeat head, joining the bassist’s quickening step.

When we hear the beginning of the A section repeated, we may expect the piece to move into a familiar jazz form. But this expectation is almost immediately disturbed. In what follows one can hear distinct echoes of the first theme, punctuated by brief gaps when no one plays: the musical equivalent of caesuras. Into these each of these fourteen silences Patchen inserts an iteration of the word “wait,” each with distinct attack, intonation and metrical value–at one point, even a stutter.  After the poet says his last word, the band hits and holds the final chord.

The general pattern of expectation and its fulfillment or frustration is the modus operandi of the piece. By the end, being caught off-guard has come to feel familiar.  Or at least just familiar enough to make me want more. That the word I desire and keep on getting delivered is itself a sign of deferral makes the whole thing even more delicious. But with the last word, “NOW,” that new toy is yanked away. Having been simultaneously held off and indulged with those “waits,” the delayed action is rhetorically completed at last. But we have grown used to waiting, and we like it, so that the “now” feels more like “no, not now, you will have to wait to hear more of those ‘waits.’” The final chord sounds the first cliché of the piece. It hangs, somewhat sour, an unwanted end.

The cover of the album sports a blurb from “Archie”: “Puts muscles in your ears,” he says. I haven’t been able to find out who this Archie is, but I like his formulation. “Murder” stages in miniature the processes that neuroscientist Daniel Levitin says are basic to our appreciation of music. Levitin tracks our listening pleasure to our ability both to anticipate patterns and to register surprise. Surprise brings affect into the experience. “Music communicates to us emotionally through systematic violations of expectation. . . Music is organized sound, but the organization has to involve some element of the unexpected or it is emotionally flat.”

Levitin focuses attention on the cerebellum, the oldest part of our brains. Ready to react, rather than to integrate or make sense of, the cerebellum is the part of the brain that makes us flinch when we hear a loud and unfamiliar sound. It is also one of the key seats of emotion. The emotion that is most useful for our self-preservation as a species is fear. We startle at a sudden sound, sense danger, and run to safety.  Or we hear the flutter of an animal smaller, weaker and tastier than ourselves, feel hunger, and run toward our prey.

The role of the cerebellum in the processing of music is still something of a mystery. “It fires when people are listening to music rather than to noise; to music they like, versus music they don’t like; and to familiar rather than unfamiliar music.” The cerebellum governs toetapping and our sense of groove. “Music breathes, speeds up, and slows down just as the real world does, and our cerebellum finds pleasure in adjusting itself to stay synchronized.”

In the joint experiment of poet and composer, “Murder” aims multiply at the cerebellum. The rhythmic components work on an interlocking principle–a version of hocketing, or what Philip Tagg calls “interpunctuation,” syncopated interruptions of cadence that create a jerky and energizing effect. Close your eyes again and listen for the mixed signals: the push and pull of Patchen and band, the interlocking of monosyllables and the musicians’ complex phrases, the fight-or-flight subtext, the violence that is promised but only as abstraction. 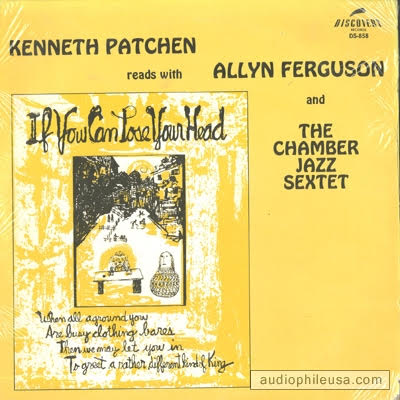 And then there are those gloves. Lemon yellow. Leather? Or rubber? To hide fingerprints, to do the dirty work and protect the murdering hands? The yellow of stain, depravity and disease, the mark of quarantine—but also, and perhaps more immediately, the ‘50s yellow of sweater sets, Cadillacs and the cover of Patchen’s next lp. The color seeps into the poem’s spaces, belied by the music. The solo poem, on the page, is sinister, withholding. When spoken into the music that insinuates and energizes, the poem pants and begs and then shuts up, abruptly. In this collaborative performance, words and silences work with and against the music to put muscles in our ears.

Cassandra Cleghorn is a poet whose first book, Four Weathercocks, is being published by Marick Press in March of 2016. Her work has appeared in many journals including Paris Review, Yale Review, Southwest Review, New Orleans Review, The Common and Poetry International. She teaches at Williams College and serves as Associate Editor of Tupelo Press.