I grew up wedged between two wars. Behind me: World War II. In front of me: Vietnam.

My older brother and his friends played not Cowboys and Indians but Nazis versus Allies. I can still remember a song they used to sing, their toy guns and swords raised, that began: Hitler, he only had one ball, Goering had two, but very, very small . . . Even stronger than my memories of that game are my memories of the World War II veterans who formed a backdrop to my childhood. Like my Uncle Chuckie, sent home from France destroyed by what he saw there. Even now, at eighty-six, he weaves tales of his experiences. He liberated Auschwitz. He stormed the beach at Normandy. He fought in the Pacific. None of us know the truth, except the basic one, which is that his duty was brief and ruined him forever. Frenchie, a friend of my family’s, lost his arm at Iwo Jima, and the empty space beneath his shirtsleeve provided hours of grotesque pleasure for all of us children. In my small Rhode Island town, the veterans marched in parades and we were told to put our hands over our hearts when they passed.

I watched the Vietnam War unfold on the six o’clock news every night. One of my clearest early memories is sitting in front of our Zenith television and sharing a pan of Jiffy Pop with my brother, the scorched popcorn with its metallic taste bitter in my mouth while soldiers in Vietnam moved across the screen. 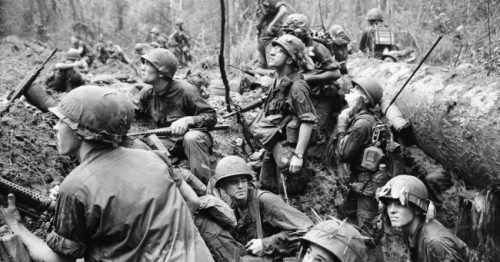 I believe that everyone has a war that speaks to her. But by the serendipity of a late Saturday afternoon when I was eleven or twelve, my war is neither of the ones that bracketed my childhood. Instead, I claimed World War I as mine. I was a precocious and voracious reader who vacillated between trashy books by the likes of Harold Robbins and sophisticated Russian and French novels. On that long-ago day at the library, my finger landed on the broken spine of Erich Maria Remarque’s All Quiet on the Western Front.

I was enthralled from its first page, but it was the novel’s epigraph that struck me most, so much so that I copied it into the purple notebook I carried everywhere in those days: “This book is to be neither an accusation nor a confession, and least of all an adventure, for death is not an adventure to those who stand face to face with it. It will try simply to tell of a generation of men who, even though they may have escaped shells, were destroyed by the war.” How could I know at such a young age that this idea of a being destroyed by invisible wounds would haunt me for most of my life?

Books and movies about World War I continued to speak to me as I grew into adulthood: Renoir’s Grand Illusion, the Wilfred Owen poem “Anthem for Doomed Youth,” even British mysteries set during that war. By then, I’d learned about metaphor, and what I read and watched about World War I had, to me, powerful metaphors. It wasn’t just about war. No, World War I was about lost youth, grief, and those invisible wounds we all carry. I’d already begun to scar that way myself. When I was twenty-five, my only sibling, my older brother Skip, died by drowning in the bathtub, alone in his house in Pittsburgh. A wet tile floor, the bad luck of falling onto the hard surface, the few seconds of lost consciousness just long enough for him to drown. Around me, my mother disappeared into grief; my father turned that hot summer to Jack Daniels. And I turned to my war. “Anthem for Doomed Youth” took on a new meaning. The senseless deaths of promising young men, the metaphor, seemed my own private one now.

About a decade after my brother died, I read Pat Barker’s novel Regeneration. The first of her World War I trilogy, Regeneration takes place in 1917 at Craiglockhart War Hospital in England. By the time I discovered it, I was a writer myself, grappling with how to write about my own private grief in a way that speaks to all of our losses. I was also interested in writing from multiple points of view, in telling a story from different angles. Regeneration’s setting already captivated me, but Barker’s use of point of view interested me as well. In the novel, a combination of fact and fiction, she moves between the points of view of Rivers, a doctor at Craiglockhart; Siegfried Sassoon, the pacifist poet; Wilfred Owen; and various other patients and women who are also “wounded” by the war.

During that initial reading, I saw another theme. The relationship between Sassoon and Owen speaks to not just to poets, but to all writers and our processes. “‘Look, why don’t you have a go at . . . “The Dead-Beat”?’” Sassoon tells Owen. “‘Work at it till you think you’ve made some progress, then bring it back and we’ll have a go at it together. It’s not too traumatic, is it? That memory.’” I found myself nodding as I read Sassoon’s advice. When writing about loss, writers have to revisit those most traumatic places. Memory leads us to discovery. 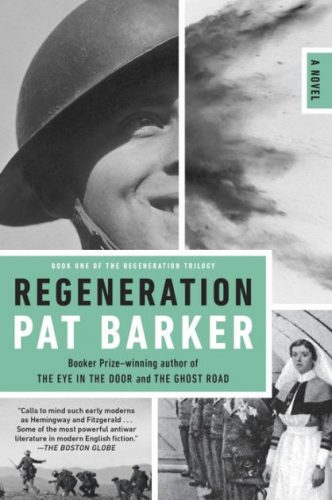 Sassoon also shows Owen the power of revision: “‘What draft is this?’” he asks him. “‘Lost count,’ Owen said. ‘You did tell me to sweat my guts out.’” Sassoon reads through the poem. When he’s finished, he doesn’t immediately comment. “‘It’s better, isn’t it?’” asks Owen. Sassoon replies, “‘Better? It’s transformed.’” Through Sassoon and Owen, Barker illuminates war and the immorality of it, but she also gives us a look at what makes writers write and how they write. The process of critiquing and revising is brought to life on the pages.

Recently, I reread Regeneration, and I found that it has yet another level of meaning for me. Among all of the other things this novel is about, it is also about grief. I had suffered yet another devastating loss: my five-year-old daughter, Grace, had died suddenly from a virulent form of strep, and in the aftermath of her death, I could not write. In fact, I wondered how one who had suffered such grief could ever write about it, or anything else. “‘You don’t think it’s possible to write a good poem in a state of shock?’” Rivers asks Sassoon. “‘No, I don’t.’” Rivers nods. “‘You may be right.’”

As I made my slow way back into the world, I found myself struggling to articulate grief, and that led me back to my war literature. Although I understood my personal connection to World War I, did those who had not had losses want to read about such feelings? “‘Grief at the death of his friends. Horror at the slaughter of everybody else’s friends. It isn’t clear to me why such emotions have to be ignored,’” Rivers argues to another doctor, who responds, “‘I’m not saying they should be ignored. Only that they mustn’t be allowed to dominate.’” Grief and horror were the very emotions I wanted to explore in my writing. What was the line between ignoring them and allowing them to dominate—not just my stories, but my life as well?

Yet Owen, who became known as one of the preeminent poets of war, had to push past his own fear of revisiting the traumatic grief and horror of the war in order to write as powerfully as he did. As Barker describes it: “The ticking of the clock was very loud in the empty room. He lay back in the chair and closed his eyes. He was afraid to measure his sense of loss.” Afraid, but he did it.

Eventually I, too, moved past my fear. But only after I started, unbelievably, to heal. “Regeneration” means spiritual renewal, and the eponymous novel shows that such a thing is possible. I found hope in my second reading of Regeneration, and my private war took on yet an even deeper meaning for me at middle age. My healing, I realize now, came from surprising places: A second daughter, brought home from China. Learning to knit, and finding comfort in needles and yarn.

“‘You see,’” Rivers says to Owen, “‘healing does go on, even if not in the expected direction.’”