Contrary to what Orson Welles asserted in The Third Man, the cultural output of Switzerland amounts to more than the cuckoo clock. As anyone who’s enjoyed Paul Klee’s playful paintings or read the subversive stories of Robert Walser knows, the Swiss have contributed their share to the arts.

Like Swiss wines, the writers this tiny country produces aren’t well known beyond its borders. Most of us, for instance, have never heard of the twentieth-century novelist Charles-Ferdinand Ramuz. I only learned of his existence while spending money. 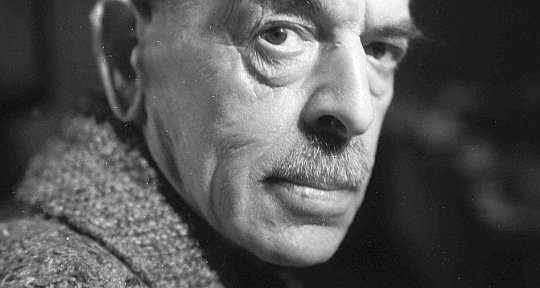 I was living in Switzerland, trying to complete a novel I’d been working on for five years. My partner had taken a job with a global health nonprofit and we’d moved our family from a posting in Hanoi to Geneva. I was the trailing spouse, at home typing on my laptop like a hermit. The village we lived in was an orderly suburb where rough-timbered barns have been converted into apartments for bankers, diplomats, and employees of acronym-laden organizations. My daughters were enrolled in local schools, where their nimble minds soaked up the new language like sponges. I wrestled with my manuscript and bought groceries.

While paying for my gruyère and Cheerios, I glimpsed Ramuz’s worried face on the Swiss 200-franc note. A quick Google search provided scant information: Born in Lausanne in 1878, Ramuz was a poet, essayist, and experimental novelist whose formative years were in Paris, where he befriended the likes of Andre Gide and Igor Stravinsky. In 1914 Ramuz married the Swiss painter Cécile Cellier and returned to Switzerland after to the outbreak of the First World War. From 1930 until his death in 1947 he lived in a stone house overlooking the vineyards near Lausanne, where he wrote deeply existential books. Most have never been translated into English.

Intrigued, I bought one of Ramuz’s early novels, La Grande Peur dans La Montagne (Terror in the Mountains) and attempted to read it in the original French. Let’s just say I have a complicated relationship with the language. Enamored of Foucault and Deleuze in college, I studied French for a semester, but it never took. During my three years in Geneva, I chose to learn by osmosis rather than taking classes. It was not a successful experiment. While my daughters became fluent, my studies were limited to the checkout lane at the supermarché: I know my aubergines from my courgettes, but any time I utter complete sentences at home, I’m mocked mercilessly by my children.

With the help of a dictionary and Google Translate, I muddled through to the end of La Grand Peur. It’s a tale of misfortune set in a village high in the mountains of Valais. Imagine Heidi rewritten by Cormac McCarthy. 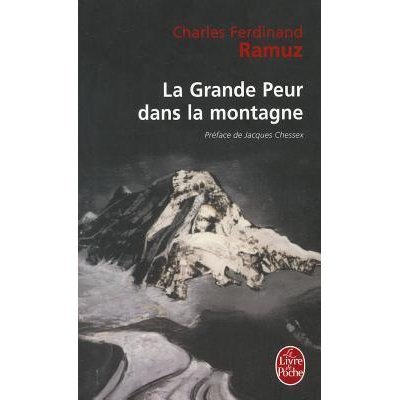 Five impoverished men decide to lead their cattle to summer pasture in a remote alpine meadow. The village council, however, forbids them because the place is subject to a centuries-old curse. Defiant, the herdsmen guide their cows to the rich green fields. Cooped up in a tiny cabin, the men begin to argue and bicker. Vague, terrifying noises penetrate the starless night. One of the men is killed by a malfunctioning rifle. Another, a twitchy teenager, flees down the mountain in terror. One herder, a superstitious old codger, keeps a mysterious paper tucked in his threadbare coat, confident it will protect him. But the cattle contract an unnamed, contagious disease. The president of the village council, accompanied by a veterinarian (who in his black cape resembles the Grim Reaper) condemns the men to exile. One of the herdsman, who is in love with a girl in the village, flaunts the order and attempts a secret rendezvous. He’s discovered, and as the accursed band attempts to descend from the high country, a group of vigilantes assembles to prevent them from returning. A gun battle ensues in the town graveyard. It doesn’t end well.

Ramuz, who was a poet before he was a novelist, doesn’t concern himself with anything resembling a plot. The strength of the book derives from a mood of dread, sustained by Ramuz’s surprising imagery. In one scene, the pine needles of a forest floor are “embroidered with golden sunlight.” In another, a man’s bloody hand is held aloft like a lamp. And in the most striking scene in La Grande Peur, a man ventures to a lifeless place of rock and ice to prove he possesses the tiniest tincture of will:

“It seemed that no one had come here since the creation of the world and nothing had ever disturbed it, except for at that moment a man proceeded to write the evidence of his existence as if here were placing letters, one after the other, one phrase and then another, disturbing the first page, that beautiful blank page, with his footsteps.”

Passages like this resonate deeply with me, as I’ve spent a lot of time in the mountains, whether in the Olympic range near Seattle, or among golden larches at the foot of the Matterhorn. Even so, living in Switzerland I felt like an outsider. I began to feel guilty about not fitting in. With all its beautiful scenery, precise train service, and fantastic quality of life, why couldn’t I love Switzerland?

And yet, it’s expensive. I missed cheap, delicious ethnic food. Young creative people can’t afford to live there. I made few friends, content to wrestle with my massive historical novel. Even as I neared completion of the undertaking, I felt like a fraud. Was I spoiled? Who was I to call myself an artist, starting a novel in my forties? At least in the mountains I know what I’m doing.

This tension between individual expression and the demands of society is well-trodden ground for Ramuz. One innovation he pioneered to explore that divide was a kind of collective narrative. In La Grande Peur and successive novels, he experiments with shifts in voice, sometimes relating events in third-person, then swerving to the pronoun nous (we) or the more formal and vague on (sometimes translated as “one” but also implying either we or they).

Such experiments pose tricky problems for translators. And after sixty years in obscurity it’s a welcome development that Ramuz has found a new translator in English: Michelle Baillat-Jones, who has produced two artful translations, Beauty on Earth (2013) and What If the Sun… (2016).

I’m especially drawn to What If the Sun, an existential parable published in 1937, late in Ramuz’s career. The premise is simple: in an obscure mountain village, a mystic predicts that the sun will no longer rise. His prediction comes to pass. Trouble is, this is completely normal for this town in winter—tucked beneath the shadow of looming peaks, the village rarely sees sunlight until spring.

Each villager has a distinct reaction to the sun’s vanishing. Some stock up food and shun their neighbors. One man who has spent years searching for his lost daughter gives up, sells his land for a pittance, and drinks copious quantities of wine—“bottled sunlight.” A young woman refuses to give up hope and has an elaborate dress made for her lover. “So what if the sun was never coming back?” she says, “Do you know what the two of us would do? We’d get into bed so we wouldn’t be cold.”

Poetic images abound: electric lamps give off light like egg yolks dripping, a woman’s necklace is a red slash above her breasts, and the persistent fog is like an old washrag. In his most haunting image, Ramuz describes, in that weird collective voice, what a young man sees as he climbs out of the valley:

Exactly like a severed head around which the beard and hair still hung smoking; that we lifted in the air a moment, only to let fall again. And already the fog and the darkness had come back to their place.”

Meanwhile, an apocalypse of another sort is unfolding in the world below: News of the civil war in Spain arrives on the radio. And in this way What if the Sun seems especially relevant to our current moment, when fatalism pervades Europe in response to terror attacks and the migrant crisis.

I no longer live in Switzerland. Back in Seattle, I feel both at home and a stranger. I suspect Ramuz faced a similar dichotomy after he returned to Lausanne from Paris and watched Europe bathe itself in the blood-pools of two wars. And yet his pessimism was tempered by a faith in the power of images to infuse life with a deep, almost crackling, intensity . I’ve come to agree: fatalism isn’t incongruous with the ecstatic experience of beauty. As he wrote in his book-length essay Raison d’Etre: “All of us, we love all of life; we love best what perishes; and especially that which makes us suffer the most.”

Andrew Engelson is a writer who lives in Seattle, a happy medium between Geneva (where he lived for three years) and Hanoi (where he lived for four). While in Vietnam he led the Hanoi Writers Collective and completed his first novel. His career prior to that included publishing hundreds of freelance articles and reviews as well holding a day job as editor of a hiking magazine. He’s currently seeking a publisher for his first novel, the story of conscientious objectors in the Pacific Northwest during the Second World War. In his spare time he spins elaborate lies on a website known as The Lost Salt Atlas.