I first picked up Barbecued Husbands and Other Stories from the Amazon as a nineteen-year-old who had just moved to New York City and was browsing through the stacks at Housing Works. In the book’s introduction, anthropologist Betty Mindlin says, “We need only to learn how to fish in the deep waters of Brazilian origins and not push aside the myths as incomprehensible.” As a white teenager from a small town in Pennsylvania, the deepfishing metaphor left me scratching my head, but the latter half of the sentence made perfect sense. The seemingly “incomprehensible”—from mythologies that twist and turn in labyrinthine plots to surrealism, to postmodernism and magical realism—fascinate me. In the writing I love, and in the tales I found in Barbecued Husbands, fish swim in rainy air, lizard women with green-tinted skin keep house, and dirty-winged angels fall from the sky to no great reception—of course they can and do. Why else but for such magic would you bother to tell a story?

I took the book home with me, reading it on the subway. A young man began talking to me, asking me what I was reading without looking at the cover. I delighted in telling him the stories of brazen women living boldly, rejecting men and their desires and needs—and neglected telling him the revenge exacted on almost all of them for such deeds. The young man left the train uncomfortably at his stop; I continued reading. 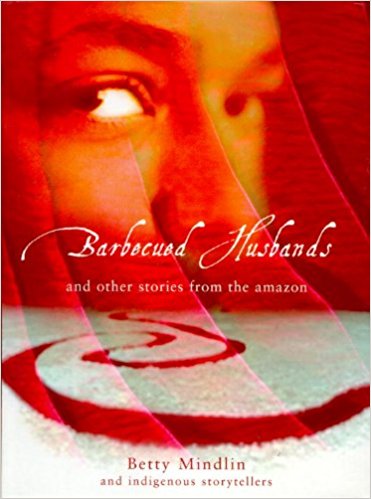 The stories collected and retold in this anthology (with credit to their tellers) are both fantastical and completely grounded in the timeless stuff of human relationships. What on the surface appears to be a story about a woman whose clitoris grows so long it drags on the ground after she takes a spirit lover is also a story about a woman who is punished for the great crime of not being attracted to her husband. Underwater spirits and their beautiful songs lure women to dance and sing rather than make chica, and husbands are roasted one by one in the titular story—a tale of wives who have strayed from their domestic duties and eventually face the vengeance of their spouses. These stories are ancient and extraordinarily contemporary.

When we talk about post-modernism and absurdism, we invoke writers like Italo Calvino, Samuel Beckett, Paul Auster, Donald Barthelme, Flann O’Brien—many of them white men, working in the 20th century. When I look deeply at mythology like that of Barbecued Husbands, or really much of the indigenous mythology of the Americas, as it wanders and takes abrupt turns and risks, I see a precursor to the works that resonate with me in modern writing. Their inventiveness is both deeply informed by and leaves behind the constraints of realism. We are not in the realm of fantasy—in Barbecued Husbands, for every ghost there is a human who once lived; every underwater spirit is born of an all-too-understandable longing. We are talking about people and marriage and love and faithlessness—and yet anything could happen to the people who inhabit this world. The writing in both mythology and so much of the most inventive contemporary literature operates between that which we encounter in the every day and that which is magic. Barthelme ends “Rebecca” with the moral “One should never cease considering human love, which remains as grisly and golden as ever, no matter what it tattooed upon the warm tympanic page.” He could just as well be summarizing the morals drawn from the tales of human tenderness, lust, and revenge in Barbecued Husbands.

Books of mythology and particularly the mythology of indigenous peoples are valuable, yet they’re seldom the ones we see on display in bookstores or libraries. What we owe to these stories is great—and some of the postmodernists, like Calvino, for example, who collected the mythology of Italy in one of his books, agree. Perhaps this is another example of the plundering of indigenous cultures that we view such books as those by post-modernists and surrealists as new, breathtaking, and profoundly inventive, when these stories which exemplify the traits we value in the modern works have existed so much longer.

Alex DiFrancesco is a writer, storyteller, activist, and baker. Their work has appeared in Washington Post, Brevity, The Heart Podcast and more. After living in NYC for over a decade they recently relocated to rural Ohio where they are still adjusting to things like “Sweetest Day.”