In our current issue, Rehab, messy stories of trauma and convalescence abound. In this Lost & Found essay from that issue, Adam Wilson finds that in John Berryman’s autobiographical Recovery, the novel’s “messiness dignifies the messiness of its subject.”

John Berryman is best known for two things: The Dream Songs—a series of 385 poems, published in two editions, for which he won, respectively, the Pulitzer Prize and the National Book Award—and his suicide. In 1972, Berryman jumped off the Washington Avenue Bridge in Minneapolis onto the bank of the Mississippi River.

Despite critical adoration, Berryman wasn’t canonized to the same extent as Robert Lowell and Sylvia Plath, his copioneers in what came to be called Confessional Poetry. Berryman despised the term, and The Dream Songs—which shifts between first and third person, and which follows a character called Henry, who, according to Berryman, both “is and is not” a stand-in for himself—never quite fit under its rubric. With its freewheeling meter and idiomatic diction, Berryman’s work is less rarefied than Lowell’s and less accessible than Plath’s. So it makes sense that he achieved cult status rather than canonization, the kind of poet who isn’t taught in AP English, but does appear in songs by Nick Cave, Okkervil River, and the Hold Steady.

In 2014, to mark the author’s centennial birthday, FSG reissued Berryman’s Sonnets, 77 Dream Songs, and The [Complete] Dream Songs, as well as a New Selected Poems. Notably absent from this reissue, however, is any of Berryman’s prose, which includes a critical biography of Stephen Crane, a collection of Berryman’s assorted essays and stories, and Recovery, his posthumously published, unfinished, autobiographical novel based on his experiences in treatment facilities for alcoholism. 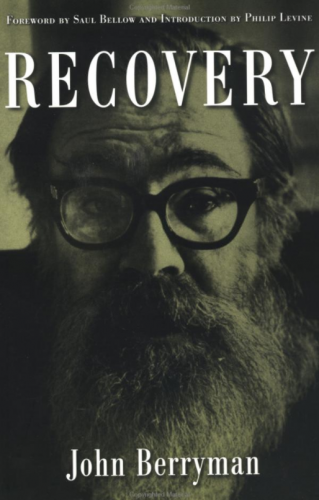 My edition of Recovery (Thunder Mouth Press, 1993)—found deep in the bowels of the Strand and featuring on its cover a photo of a God-bearded Berryman staring glass-eyed into the camera—includes a foreword by Saul Bellow and an introduction by Philip Levine. Interestingly, neither writer’s remarks contain much comment, if any, on the book they purport to present. Levine even goes out of his way to offer a kind of counter-Berryman to the one we might project onto the author of Recovery. The vibrant and life-loving Berryman he describes would seem to have little in common with the Berryman who wrote, and failed to complete, this grim book.

What is it about Recovery that’s so scary? And why, in our voyeuristic culture, where buzzwords like suicide and addiction spell entry into Oprah’s Book Club and tortured genius is the stuff of Best Adapted Screenplays, is no one reading this novel?

For starters, Recovery provides little in the way of voyeuristic satisfaction. If Berryman’s suicide was romantic (according to one bystander he waved goodbye on his way down), his attempted recovery—or at least the fictionalized version of it we get in Recovery—was decidedly not. Berryman has little interest in the highs and lows of the drinking life, or even the anguish of detox. Instead, he captures, in all its claustral and quotidian boredom, the day in, day out struggles of adapting to sobriety in a hospital ward.

The novel follows Dr. Alan Severance through two months of inpatient treatment, mostly spent agonizing over the first of the twelve steps of recovery: We admitted we were powerless over alcohol—that our lives had become unmanageable. Severance, only recently released from a previous stint at a different facility, blames his relapse on his failure to fully accept that first step. It’s not the admission that gives him trouble, but his anxiety about his sincerity in making it. How can we ever know when we’re being honest with ourselves? These are the kinds of gray area questions that the black-and-white dogma of AA attempts, out of functional necessity, to mute. If nothing else, Recovery offers testament to the difficulty in embracing such rigid doctrine, even when that doctrine might be lifesaving.

“I have a memory like a steel trap,” Severance later explains, “except of course for alcoholic distortion and brain damage.” He’s the opposite of your typical unreliable narrator because he’s aware of his own unreliability. He doesn’t trust himself, and that mistrust leads to a vicious cycle of doubt and anxiety. One thinks of another AA aphorism: “Let go and let God.” For Severance, a believer, it’s the letting go that’s hard.

Like Henry in The Dream Songs, Severance both is and is not Berryman, though I’d venture to guess that, here, he more is than isn’t. Both are Pulitzer Prize winners who remain haunted by their fathers’ suicides. Severance’s field is biology, but this fact seems forgotten by the fifty-page mark, after which Severance rarely mentions science, though he does speak with depth on various literary matters. But while the fictional scrim may be thin, the distinction is important in a book so caught up in questions of identity. “Jack-Who-Drinks has got to alter into Jack-Who-Does-Not-Drink-And-Likes-It,” explains one of the facility’s counselors. Anyone who’s ever attempted to give up a defining behavior (for me: smoking) understands that this is easier said than done. Severance is a purposefully loaded name. To sever, to be severe, is to persevere.

Until, of course, one can’t. Recovery doesn’t end so much as stop, which frankly causes more relief than disappointment in the reader. Recovery’s early pages brim with the bright and inimitable music Berryman brought to his Dream Songs, and the vitality of the prose offsets its gloomy content. At times, there’s even humor, such as Severance’s fantasy of converting to Judaism (among reasons listed: “Unique horror of anti-Semitism”) or his frustration with the Lord’s Prayer (“what the hell was the point of reminding the Lord of the Lord’s power[?]”) But Recovery quickly stalls, and in its attempt to chronicle the boredom and redundancy of rehab, it can’t help but succumb to those qualities itself. Even the manic prosody of the early pages gives way to a kind of barbiturated flatness.

Still Recovery’s messiness dignifies the messiness of its subject. I first read it around the time of the James Frey fiasco, and in many ways it felt like a necessary corrective to books like Frey’s, which arc from humble-brag degradation to self-righteous redemption. One tenet of AA is that there are no recovered addicts, only recovering ones, but in the neatness of their narrative schematics, these books tell a different, more comforting story. In Recovery, by contrast, there are no answers, only desperation punctuated by giving up. The takeaway is truly demoralizing: the futility of art to actually save a life. It’s not an easy book to read, or a pleasant one.

Ultimately, I feel much the way Berryman felt about one of his own idols, W. H. Auden: “My love for that odd man has never altered / thro’ some of his facile bodiless later books.” Recovery is not remotely facile, but a certain blind love for anything Berryman helps push past its roadblocks.

In graduate school I once spent a long Christmas break reading Berryman alone in my studio apartment while composing what would become, after another half decade of drafts and disappointments, my first novel. I had decided to isolate myself during this period, interacting only with the bodega owner who sold me cigarettes and the takeout guy who brought my Thai food. This was ostensibly so I could buckle down and finish my book, but also, in retrospect, because I was depressed. My window overlooked a large McDonald’s, and I’d often climb onto the fire escape with a cigarette and The Dream Songs. In my memory, snow swirls around me, though I doubt this was the case; I would have been anxious about slipping off the fire escape. This is the power of The Dream Songs: it makes weather. These poems didn’t just capture the despair I was feeling, but did so with such beauty and contour as to render it transformative. The result is not despair but something like its opposite: a hard pulse, a deeply human hum.

Recovery is a different book, by a different Berryman, and one that doesn’t end on the side of life. It doesn’t end at all. David Foster Wallace, another tragic suicide, thought that great literature makes us feel less alone. Berryman put it differently: “Any writer’s, or even scientist’s permanent message perhaps is really just this: come and share my delusion, and we will be happy or miserable together.”

Adam Wilson is the author of the novel Flatscreen and the short story collection What’s Important is Feeling.