Abandon all folksy Yiddish archetypes, ye who enter here. Sholem Asch gives a darker and richer portrait of Jewish life during the Russian Revolution in Three Cities, as Aaron Hamburger details in this Lost & Found.

I had to travel from schmaltzy New York to white-bread Gulf Coast Florida to discover the great Yiddish writer Sholem Asch.  I was visiting my parents and had run out of things to read when my father handed me Asch’s novel Three Cities.  “Try this,” he said.  “It’s a masterpiece.” 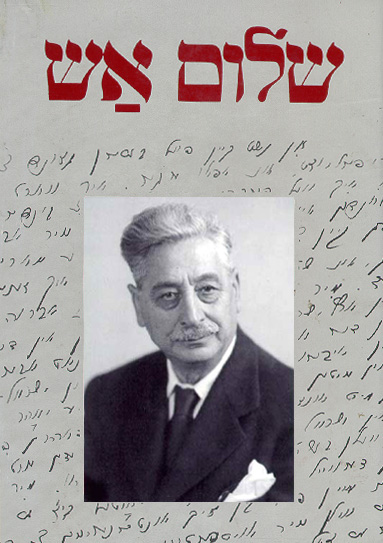 As I read over Asch’s bio page, I was surprised I’d never heard of the guy, given all the success and notoriety he achieved during his lifetime, from 1880 to 1957.  His first major work, a play called God of Vengeance (1907), about a lesbian affair between prostitutes, was considered so shocking, even for Broadway, that it was forced to close.  In 1933, his best-selling epic novel of the Russian Revolution, Three Cities, was featured on the cover of the New York Times Book Review.  He was nominated for the Nobel Prize, and in 1936 he was named in the New York Times as one of the world’s ten greatest living Jews, the only writer on a list that included Einstein and Freud.

Today when we think of Yiddish writers, the first name that pops up is Isaac Bashevis Singer, who actually won the Nobel and whose short stories fit the general preconception on Yiddish literature: quaint magical realist fables set in backwater villages.

By contrast, Asch’s Three Cities is a grand historical epic in the vein of his heroes, Dickens and Tolstoy.  Most of the book’s characters are Jews, yet they think and behave in ways atypical of the usual folksy Yiddish archetypes.  They’re thoroughly modern, grappling with problems of psychology, philosophy and politics.  They wage war, indulge in kinky sex, and interact with the world of goyim as equals.

What struck me most about Three Cities was its core philosophy, that anti-Semitism is a non-Jewish problem.  “In every drop of the ocean all the attributes of the whole ocean are contained, for the ocean consists of drops,” says one of the novel’s characters, according to a Talmudic saying.  Similarly, for Asch, the fate of the lowest tier of Russian society, the Jews, becomes a barometer for the viability of an entire nation.  Time and time again, by screwing the Jews, Russia’s leaders end up screwing themselves.

Three Cities begins with a depiction of how the anti-Semitism of the Russian empire creates a cesspool of discontent that brings down Czar Nicholas II.  After centuries of despair, Russia’s Jews see an opportunity for change in the chaos of World War I.  Many of them join the fight for revolution, and in response the Czar, who’s losing both a world war and his grip on power at home, takes out his frustration on all his Jewish subjects.

Asch’s account of the resulting mayhem is an eerie foreshadowing of the Holocaust:

Sick people and women far gone in pregnancy who could not leave their beds were summarily shot by officers where they lay…[Jews] were packed indiscriminately like herrings into the railway wagons: grown-ups and children, sick and sound, without air to breathe, without food or drink, pressed limb to limb, a dense confusion of human members and variegated scraps of clothing.  Coupled to hastily-stoked locomotives, these wagons raced with their wretched cargo through fields and woods towards a destination which nobody knew.  It was not man that seemed mad, but the world itself.

The Czar’s cruelty backfires, driving the Jews squarely into his enemies’ camp.  After his downfall, a Jewish lawyer named Solomon Halperin convenes a meeting of Russia’s rich and powerful at the luxurious Hotel Metrople in Moscow to present a plan for the country’s transition to liberal democracy.  During the meeting, however, the Communists unleash an attack in the square outside.  Asch compares the frightened capitalists fleeing the meeting to a bank check written for a large sum that’s suddenly “been fully cashed in nothing but copper or nickel coins, which were so countless that they rolled away on all sides and could not be kept in hand…They left the complicated problem of Bolshevism, which had suddenly been presented to a great empire, to ‘Jewish brains,’ and the Jews could tear each other’s hair out over it if they liked!”  After the Communists come to power, Halperin is murdered by the anti-Communist forces, who are more eager to spill Jewish blood than to fight the Reds.

Many Jews hope the Communists’ egalitarian philosophy will mean a better future.  Instead, the new Communist government issues a decree closing the Jews’ small businesses.  The idea is that the Jews will become less greedy and moneygrubbing if they seek more “honest” means of labor.  But work is so scarce that there are no jobs for the Jews to turn to.  And worse, the closure of Jewish businesses produces a chain reaction that causes Russia’s entire economy to grind to a halt.  Crime spikes and the prisons become crowded with former socialist sympathizers who’ve been converted into counterrevolutionaries and petty thieves.

Today, Jewish American writers from Philip Roth to Nathan Englander write more like Singer than Asch.  The settings of their stories have changed from Eastern European ghettos to Brooklyn or Israel, but the themes are largely the same.  What does it mean to be a Jew?  How to we reconcile our faith with modernity?  Why do gentiles hate us so much?  Non-Jewish readers are free to draw parallels between the Jewish experience and their own, but as goyim, they can only be spectators.

Asch, however, shows us why the story of a small ethnic group matters to the culture at large.  Rather than focus on the unique aspects of the Jewish faith, he portrays a variety of belief systems – Judaism, Christianity, and even Communism – as interchangeable.  (In fact, his follow-up to Three Cities was a trilogy about the life of Christ, in Yiddish.)  “God does not care in what fashion you believe in Him,” says one of the characters of Three Cities, summing up the spirit of the novel, “so long as you believe there is a power for good directing the world, and resign yourself t it so as to serve its purpose.”

Aaron Hamburger is the author of a story collection titled The View from Stalin’s Head (Random House) which was awarded the Rome Prize by the American Academy of Arts and Letters and nominated for a Violet Quill Award.  His second book, a novel titled Faith for Beginners (Random House), was nominated for a Lambda Literary Award. Currently he teaches creative writing at Columbia University, New York University, and the Stonecoast MFA Program