“Experiencing the sacred is the opposite of being alienated,” wrote Susan Sontag in a 1971 journal entry—yet Sontag knew also that the “‘sacred’ always involved risk of death, annihilation.” Shohei Ooka’s Fires on the Plain (1951) is strung along just such razor wire. A Japanese novel about a troubled young soldier during the darkest days of World War II, the novel seamlessly braids Christian imagery with the nightmarish effects of cannibalism. On the surface, it’s a combination that sounds totally unpalatable, but Fires on the Plain—based in-part on Ooka’s own experiences as a soldier in the Pacific Theater—is a novel of strange and horrifying beauty, deserving to be set on the shelf next to the most necrotic of works by Cormac McCarthy. Though during his life Ooka became one Japan’s most well-respected and admired novelists, his work is almost entirely unknown today in the West.

Tamura, the book’s protagonist and narrator, wanders through the thick jungle and burning plains of Leyte Island in the Philippines, cut off from his fellow soldiers, starving. Forced to forage for whatever food he can, he is invited by a dying officer to partake in the officer’s flesh, presented as sacrament. The annihilation of one being contributes to the life of another, but results in a kind of holy madness. 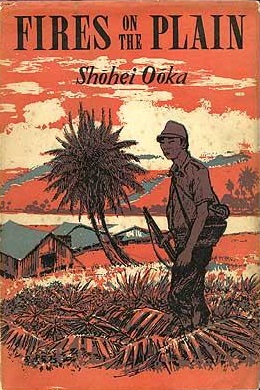 It’s just such holy madness that dominates Fires on the Plain. Tamura is followed everywhere he goes by a pair of eyes that may be the eyes of God—and may be the eyes of a hungry killer. A disembodied flame comes to him in the night, quietly driving him toward the holy—or perhaps unholy—madness that marks the rest of the book. “It was not because I was still alive that I clung to the notion of life, but because I was already dead,” he writes in the novel’s early pages. But: “if I no longer belonged to the world, I at least did not have to undertake to kill myself. I smiled with satisfaction.” (This is one of the novel’s more cheerful pairs of sentences.)

I found the novel quite by accident on the shelf of a small bookshop, The Globe Bookstore, on a cloudy day in Seattle’s Pioneer Square neighborhood. I’d never heard of his work, never seen it in a bookstore. The note from the translator on the copy I found, published in 1967, placed awkwardly on the back cover of the book, claimed it was known as “the most important novel to have come out of the last war,” meaning World War II. Despite the book’s supposed importance, it seemed odd to me that the book’s publisher could not be bothered to update the book’s jacket copy—America had already finished the Korean War and was in the midst of the Vietnam quagmire at the time of the book’s printing. The most recent edition of the book in English, released by the same publisher, came out in 2001.

Finding anything out about Ooka proved to be just as much of a head scratcher. There is precious little biographical material about him available in English. There has been only one book-length English-language study of his work. So much for “the most important” Japanese novel of World War II. (This is certainly not an indictment on the novel itself, but on America’s nearly total ambivalence towards works by non-Western writers.) What I was able to find about him amounted to little more than the short bio contained in my copy of the novel itself, which made it clear that the novel was at least partially based on his own experiences fighting in the Japanese Army in the Philippines near the tail end of the war, and that he’d been captured as a POW. 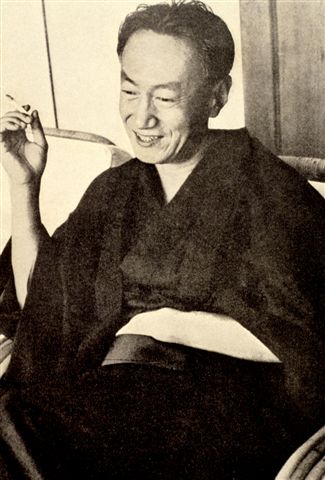 Originally published in Japanese in 1957 as Nobi, the book combines the nightmarish mood of McCarthy’s Child of God with the contemplative, oblique darkness of W.G. Sebald’s Rings of Saturn. Whereas McCarthy describes the horror of inhumanity in its externally manifested forms—on-page necrophilia, say—and Sebald indirectly underscores the horror of Germany’s past in the subconscious imagery of his narrators, Ooka’s novel does both. Fires on the Plain begins with a sense of oncoming death, segues into the horror of cannibalism and total human deprivation, and culminates in a surreal, perverted religious fervor only matched by the work of Flannery O’Connor.

The book opens with the young soldier being kicked out of his unit because of his consumption. His commander instructs him to go to a field hospital and, if he is not admitted, then to commit suicide with his hand grenade. On such happy terms our hero sets out on his journey. As he walks toward the hospital, in a particularly Sebaldian observation, he remembers

“…when our troopship was passing through the Pacific and I stood on the deck vaguely gazing out to sea, I . . . suddenly [saw] myself impersonally, as one sometimes does in dreams, as part of a tidy, well-ordered scene. The dark-blue, monochrome sea stretched out in all directions to form a perfect circle girded by the horizon; the waters seemed to be forced up all round the circumference, so that we, who were in the center, occupied a sort of hollow.”

As he gazes out from this “hollow”—a very curious word choice—Tamura realizes that he has been unconsciously envisioning his own death. Of course, since this is a work in translation, whether or not “hollow” is the exact word choice made by Ooka is impossible to tell, but the overall effect is clear.

Tamura is refused entry to the field hospital, where soldiers are only admitted if they have brought a surplus of their own rations, which he has in very short supply. Shortly thereafter, the hospital itself is bombed, and he’s left to wonder the forested mountains alone. From a high hill he sights a cross shining from atop a church steeple, which pulls him down to it with a magnetic, mechanical force. Apparently, although how or why is never explained, there was a time when he had “believed in this foreign God, read the words of those sent by him, and sung their songs” and this image of the cross is powerful enough to draw him down from the safety of the hilltop and into the town.

What he finds there is the scene of a massacre, although at first he completely fails to notice the bodies, which lay everywhere around the church. He wonders, rather clinically, if he’s going insane: “Clearly the link between my consciousness and the outer world was gravely attenuated.” Stepping past the bodies, Tamura goes into the church, where he sees a crucifix on which the body of Jesus has taken on a “corpselike tint,” transformed into nothing more than a “gory carcass being forced down by gravity.” Tamura lays down before the crucifix and weeps.

It is this grotesque inversion of the sacred that sets the tone for the rest of the novel. After leaving the chapel he comes upon another corpse. “The surrounding grass had dried up from the slime that oozed out of the decomposing body. One hand pointed in my direction,” he notes. Stepping past the cadaver, he goes into the presbytery. “They should build a hotel here for tourists,” he thinks. “It would be a great success.”

Once inside the presbytery, Tamura gazes up at a crucifix. “The pale, naked body had a corpselike tint, which contrasted with the reddish black of of the coagulated blood,” he observes. It struck me how similar to Dostoevsky’s description, in The Idiot, of Holbein’s The Body of the Dead Christ in the Tomb was his description of the body of Christ. A few pages later the echo of Dostoevsky is made explicit, when Tamura is surprised by a young Filipino couple, who are even more surprised by him. Without thinking, he shoots the woman. As the woman’s lover runs away, the young soldier is reminded “infuriatingly of Lisa in Dostoevsky’s The Idiot, and again I pulled the trigger.” Having killed someone—the first person he’s ever killed—he thinks of Dostoevsky. He shoots the man not simply out of surprise, rather but because the man reminds him of a character in a book he’s read. In part, it’s this layering of culture on culture, of bookishness across the spatter of random violence that makes Fires on the Plain the masterpiece that it is. 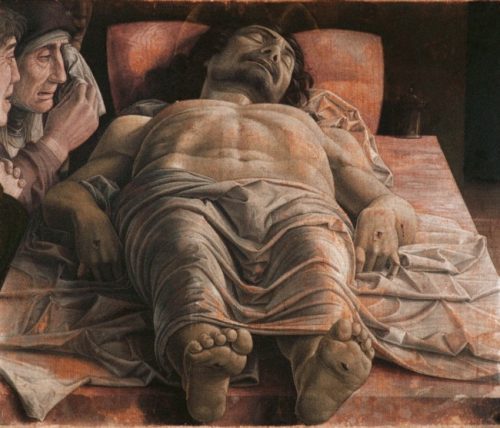 The book from there descends fully into madness. There’s another attack by the Americans, and Tamura wanders the wilderness of the island alone, starving, feeling as if he were “being moved forward mechanically like a puppet.” Bodies of Japanese soldiers dot the landscape: “Some lay on the road with their heads pointing in the direction in which they had been walking; others had crawled to have a drink of water in the ditch . . . and lay there with their heads submerged . . . others had decomposed still further into liquid and vapor, leaving only a pile of clothed bones to announce the fact of their previous existence.” He notices that many of the bodies have had their buttocks removed—and it occurs to him to eat human flesh, himself. It’s an impulse he at first tries to resist; up to this point he’s lived on leaches and grass. He comes upon an officer nearly dead, raving, who refers to Tamura as the Emperor of Japan. Although the officer seems totally out of his head, the moment before he dies he fixes his gaze on Tamura and says: “When I’m dead, you may eat this,” and indicates his own arm, echoing the language of Jesus at the Last Supper, telling his disciples to “Take and eat, for this is my body.” When the officer dies the starving young man thinks again of the crucifix he saw in the church, of Jesus’ arms, “strained from hanging”. The officer’s body embodies the sacrament of the dead Christ on the cross.

As straight-forwardly symbolic as this may seem, the book consistently cuts across the grain against every symbolic-seeming moment it presents—when Tamura eventually tries to eat the officer’s body, the officer’s stomach has risen “into two great globes,” because “God had transformed him before my arrival. He was beloved of God.” The beloved of God is a bloated, rotting body. It’s here that Ooka is operating closest to that territory occupied by O’Connor. Yet whereas O’Connor’s work is often feels frustratingly over-determined, Fires on the Plain resists every interpretation it invites, and is one of the most profoundly moving works of fiction on the nature of the horrors of war, and the strange-making pain of acute isolation, that I’ve ever read.

Near the end of the book Tamura confesses he’s been writing what we’ve been reading from the ward of a mental hospital, five years after the war, and that his doctor has read it. “It’s very well written,” his doctor says. “It reads just like a novel, you know.” Considering its origin in Ooka’s own experiences, the book’s awareness of itself as a novel feels bracingly contemporary. As a masterpiece of literature in any language, and one which so deftly mines—or rather destroys—the place where Western religion and Eastern culture cross-pollinate, Fires on the Plain deserves a much wider audience in the English-speaking world, and as a novel that masterfully portrays a mind haunted by God and the horror of inhuman violence in inhumane isolation, it deserves to be placed on the shelf beside the work of O’Connor and McCarthy. A new translation would go a long way toward that. Let’s hope it gets one—and soon.

Nathan Knapp‘s fiction and essays have appeared in The Fanzine, Blue Mesa Review, The Millions, Frequencies, and elsewhere. He founded and edits The Collapsar, lives in Tulsa, and is currently seeking a home for his recently completed novel, Verklempt at the End of the World.