We as a culture have perhaps never before talked more about the body. Yet this conversation spins again and again through the same rhetorical loops: the body-positive marketing couched as affirmation, the girl power slideshows, the call for all women to feel beautiful that points back to the failure of all women to be treated as such.

Enter Mona Awad’s fantastic new genre-bending fiction, 13 Ways of Looking at a Fat Girl, which escapes this doublespeak. Awad’s book turns our attentions from the diluted and universal to the powerfully specific in this story of how one woman is shaped by her shape. Sharp, perceptive Lizzie, Awad’s eponymous “fat girl,” sees her social powers wax and wane as her weight and sense of self evolve over the course of the book. Awad’s writing is white hot, and deserves to be invoked alongside Gaitskill in its observation and cutting humor, its literary pleasures. It’s impossible not to care for Lizzie: not a talking point, but a sweet, calculating, hurt person—that is to say, a real woman, who leaves that scarequote-worthy cliché miles behind. Mona and I conversed via email earlier this spring.

Emma Komlos-Hrobsky: From its title inward, 13 Ways of Looking at a Fat Girl takes on the dual project of showing us how much who Lizzie is perceived to be is determined by her body, and of truly seeing this girl in all her particularity. To me, this is precisely what makes this book great: Lizzie is a singular, incredibly human character. Which came first, Lizzie or an interest in writing towards a bigger conversation about women’s bodies?

Mona Awad: That’s a great question. Probably, I would say they came roughly at the same. I think I first started with the image of a young woman in a dressing room staring at a piece of clothing she already knew wouldn’t fit while her mother and a saleswoman waited outside. She actually sort of appeared to me during a long car ride in Utah. She wasn’t particularly specific in terms of her exact body size and her physicality. But I knew this was a woman for whom body image was a deep struggle. I knew this was a woman who saw herself as a fat girl, and that the term itself was a loaded and complicated one for her. Who and what were shaping that way of seeing herself? And then a number of other images came to me: that same woman having lunch with a friend, having sex, out with her mother. In each of these scenes, this notion of herself as a fat girl was playing itself out differently, being reinforced differently. And I knew I wanted to explore all the ways in which that notion of herself as a fat girl had affected her life–especially her relationships–and the way she was in the world. That was when the idea of 13 Ways of Looking at a Fat Girl came to me–I wanted to challenge and complicate all of the assumptions, images, and simplifications that come with this term, to explore how “fat girl” isn’t simply a question of flesh—it’s a far more dynamic, psychological and relative state than this, one that can hold contradictions, is internally and externally constructed. 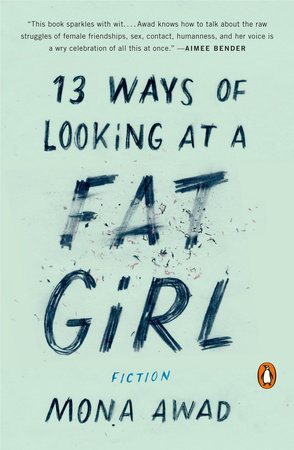 EKH: What were the most surprising things you discovered about Lizzie over the course of writing the book? Were there parts of her psychology or choices she makes that you couldn’t have anticipated?

MA: She was crueler and harder at times than I thought she would be. She was certainly less of a victim than I expected. She was also more obsessive than I initially imagined. I think the story in which she becomes fixated with a larger woman after she herself has lost weight was a story I did not anticipate writing. But I also think it was an extremely important confrontation for Lizzie to have—this is a woman who is happy in her own skin and Lizzie still isn’t. I also was very surprised to leave her where I left her at the end the book. But I was committed to portraying her with as much honesty as I could and to leave her anywhere else would have felt false.

EKH: Lizzie has a terrifying, powerful line early in the book in which she wishfully imagines herself older and thinner and says, “I’ll be hungry all of my life but I’ll also have a hell of a time.” What do you make of this choice that Lizzie sees for herself? Is this dichotomy between happiness and eating always so extreme, or only so as seen from Lizzie’s teenage vantage?

MA: Yes, I think that sentence definitely betrays something of Lizzie’s overall psychology and certainly her teenage one. One thing I really wanted to explore in the book is the dynamic relationship between perspective and body image, the space between how we see ourselves, how we imagine are seen by others, and what might actually be happening. I think the first story/chapter in the book, in which Lizzie says this as a chubby teenage girl, sets up those tensions and those disconnects. It also prepares the reader for the stories to come and for the mind, the eyes and the body that they’re going to inhabit throughout the course of the book.

EKH: Lizzie’s insecurities make her vulnerable to the dubious, exploitive friendships of other girls like Mel and China. It’s satisfying, and I think also very perceptive of you, to see how Lizzie is also able to capitalize on the role she’s been cast in by dint of her weight. My favorite section of the book is probably “Your Biggest Fan,” in which we realize Lizzie is seeing not one but a number of needy, aspiring songwriters, all of whom assume she’s otherwise desperate for affection. Can we talk about that? How does Lizzie manage to leverage other people’s assumptions about her in her favor?

MA: “Your Biggest Fan” was definitely a very pleasurable section to write. Each story is titled after a different way that Lizzie believes she is seen or imagines she is seen by others. Ways that she resents. Ways that are simplifications. Ways that box her in as a victim which I then attempted to complicate or trouble and even subvert throughout the course of the chapter. In this chapter, I think the notion of herself as a victim of this self-obsessed musician gets subverted. He also becomes her victim in the end—in part because he needs her just as much as she needs him and his need gets used against him. We often get pinned into certain roles because of other people’s needs and weaknesses. There is real power in realizing that. And Lizzie does. Being seen as a “fat girl” isn’t necessarily a branding or a stamp of victimhood. It’s far more complicated. Certainly it can be that, but it can definitely also be a position of power too. When we use other people’s less than flattering assumptions about us (especially the ones we resent) in our favor, we challenge those assumptions. Ultimately, Lizzie is neither a victim nor a hero of her own story. She is both, often simultaneously, and I think that is what makes her human.

EKH: The book is termed “fiction” rather than a collection of short stories or a novel, which I find quietly thrilling; the book might be both simultaneously, or neither, or something beyond known category. How did you conceive of the book in terms of genre as you were writing, and how that sense of generic place fits into or reflects the project as a whole? 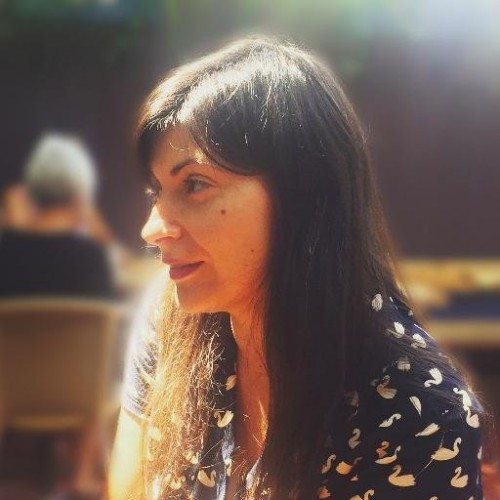 MA: This is a great question and one that I thought about throughout the writing of the book. I ultimately wanted this book to be a novel and a collection of stories—I actually needed it to be both. I wanted to offer discrete glimpses into a woman’s life, each one telling the story of that particular moment in her life, but then they also connect to tell a larger story of her life, and to form a larger portrait of this woman. I think this in part why I chose the title 13 Ways of Looking at a Fat Girl. It gave me that narrative freedom to tell many stories but also a constraint in that they were each contributing to the story of one woman. There were a number of things I wanted to say about how body image can impact and pervade various aspects of our lives, and so many stories I wanted to tell, that this seemed the best way to tell all the stories, while ultimately still telling one—how do all those different ways of looking shape this one woman—her body, her mind, how she sees herself, how she is in the world?

EKH: The book also rotates between points of view—why?

MA: So much of Lizzie’s idea of herself is bound up in how she sees herself and how she imagines others see her that I thought it was important to look at her from both internal and external perspectives. Certainly I was committed to reporting Lizzie’s interiority with as much nuance and depth and honesty as I could. At the same time, I thought it was equally important to step outside of her somewhat dysmorphic gaze and examine her from other eyes. I did this with a few male perspectives but I also attempted to do this in other stories which are still first person narratives told from Lizzie’s perspective. In “The Girl I Hate,” for example, Lizzie, who is dieting at this point, has a recurring somewhat sado-masochistic lunch date with a co-worker, whom she calls Itsy Bitsy, who is very thin despite eating a ton of food. In this first scene, Lizzie is painted as the “fat girl” and Itsy Bitsy is a sort of unknowing tormentor. But then Lizzie, when she later goes out to dinner with her best friend Mel to bitch, becomes an Itsy Bitsy to Mel, who is larger than Lizzie at this point. Mel becomes Lizzie’s “fat girl.” This sort of reversal happens in a number of stories, in part because I wanted to explore how the fat girl can be a very dynamic state, very relative, and very much dependent on social circumstances. Also, in general I think the disconnect, tension between how we see ourselves and how others see us is infinitely fascinating. There is a whole world of story right there in that space.

EKH: Our cultural conversation about gender and the body has to be at all-time zenith. What are the things you think we’re still not talking about, or need to talk about better?

MA: I think there are always going to be unsaid things and unsaid motivations in every conversation about gender and body image. We’re human after all and talk, even the most well-intentioned and self-aware talk, can only get us so far. I think what we need to do a whole lot more of is listen to each other. And tell stories—on the page, on the screen, in music, in visual art. Art is quite good at cutting to the quick and the chase.

Mona Awad‘s writing has appeared in McSweeney’s, Electric Literature, VICE, Time Magazine and elsewhere. She holds an MFA in fiction from Brown University and is currently pursuing a PhD in Creative Writing and English Literature at the University of Denver. 13 Ways of Looking at a Fat Girl, released by Penguin in February 2016, is her first book.

Story About the Story: An Interview with Edward Hirsch