In 1971, Tom Borders and his brother Louis opened a small, used bookstore on South State Street, in downtown Ann Arbor, near the University of Michigan campus. The brothers went through a number of minor location changes, switched from used books to new, developed an innovative inventory system, and quickly earned a reputation for their knowledgeable staff, both as booksellers and in business. Finally taking over the two-story, 44,000-square-foot, former department store building on Liberty and Maynard Streets, Borders Books reigned as the largest retail business in downtown Ann Arbor, effectively becoming the first book superstore.

Growing up in Ann Arbor, I spent nearly every day on Liberty Street, at the flagship store, known in the industry as Store Number 1. I would wander through the aisles and run my fingers over the spines of books, or I would sit alone in a quiet corner and read Toni Morrison or Jean-Paul Sartre or Lester Bangs or Maximum Rocknroll. Borders wasn’t just a retail store; it was a refuge and sanctuary from the pressures of adolescence and the noise of the city.

Borders was acquired by Kmart in 1992 for $125 million, and went public in 1995. By January 1999, the company had 256 superstores across the United States, and franchises in such varied international locations as the UK, New Zealand, Singapore, Malaysia, Oman and Dubai. In 2005, Borders posted an annual profit of $101 million. But Borders couldn’t keep up with rapid changes in the industry, and by February 2011, after numerous resignations, job cuts, and store closures, Borders filed for Chapter 11 bankruptcy protection. In September of that year, after 40 years in the book business, Borders announced they were closing Store Number 1. From the light fixtures to the bookshelves, everything was for sale, dirt cheap. What was once the heart of downtown Ann Arbor was reduced to looking like the worst garage sale in town.

Two years earlier, in June 2009, the independent Shaman Drum Bookshop had shut its doors, after 29 years on State Street. With the closing of Borders, Ann Arbor found itself without a place downtown to find new books. There were still a few used bookstores, Dawn Treader and West Side Book Shop among the longest-running (David’s Books, after 32 years in business, closed four months earlier than Borders.) Aunt Agatha’s, on South Fourth Avenue, continued to operate exclusively in mystery titles. Crazy Wisdom, on Main Street, specialized in New Age books (and a wide selection of crystals and tarot cards.) But to find the latest title by Philip Roth or Jesmyn Ward, you needed to drive miles from downtown, out to the Westgate shopping center, where the independent bookstore Nicola’s Books lives. Or, if you were hard-pressed, you could head east, where Barnes & Noble looms over Washtenaw Avenue.

I relocated from Ann Arbor to Portland, Oregon in 2004. Not long after moving to Portland I began working at Powell’s Books—first as a cashier and then as a bookseller. Working at the world’s largest independent bookstore, needless to say, had its benefits. I was not only permitted, but paid, to amble daily through teeming aisles of books. It was pure intoxication. But each time I would visit family in Ann Arbor, I would check on my Liberty Street Borders, peering through the windows and watching as it steadily emptied of inventory and customers until, like the broken carcass of a fish, it was finally gutted and cleaned.

Hilary and Michael Gustafson both grew up in Michigan. Hilary is from Ann Arbor; Michael comes from Lowell, near Grand Rapids, but has family in Ann Arbor. Their individual pursuits, school, and careers took them to Washington, D.C., Los Angeles, and New York City, respectively, but their paths came together for the first time in 2009, when—after a months-long, long-distance courtship—Michael joined Hilary in Brooklyn. Michael was a freelance writer and video producer; Hilary Lowe was a sales rep for Simon & Schuster. They were engaged in 2011. In 2012, upon learning of the closing of both Shaman Drum and the flagship Borders, Michael and Hilary decided to return to their home state and pursue their dream of opening a new bookstore in downtown Ann Arbor.

Literati Bookstore opened March 31, 2013, Easter Sunday—the day of resurrection—on the corner of East Washington Avenue and Fourth Street. At 4,000 square feet divided into three floors (including the third-floor café, Espresso Bar), Literati is not the largest bookstore to have made a home in Ann Arbor, but it might be the most intentionally curated and meticulously decorated. Inside you’ll find a black-and-white, checkerboard pattern—painted by hand on the hardwood floor—hand-lettered window signs, product design by local designers, artwork by local artists (full disclosure: my mother’s mixed-media illustration of the building’s façade is displayed in Literati’s events space) and the original bookshelves from Borders Store Number 1, purchased by Michael and Hilary on the last day of liquidation. Literati is not only a tribute to Ann Arbor’s rich history of art and literature; they have taken inspiration from the city’s past, in order that they might contribute to its future.

Literati has a staff of fourteen, including former employees of both Shaman Drum and Borders. Their store manager, Jeanne, is a twenty-five-year veteran of Borders, having first started at the original store on State Street. Joe Gable, who had worked alongside the Borders brothers at the beginning—and was instrumental in their success—has taken an active involvement with Literati, offering Michael and Hilary his assistance and counsel. 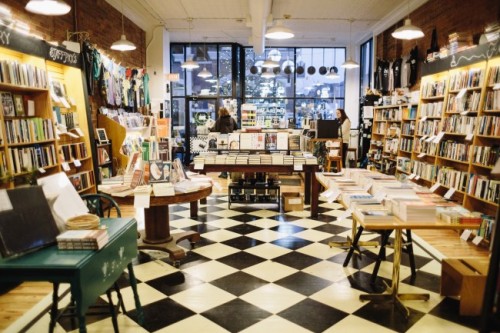 In the two-and-a-half years since Literati opened their doors, the excitement and encouragement from the public has not diminished. On each of my visits, the store was busy—not just with gawkers but with actual book-buying customers. Much of their success has to do with Hilary and Michael’s shared vision, their careful attention to aesthetic, and their small staff of veteran booksellers. Their success also has much to do with their level of community engagement, whether with their four book clubs, their signed first-editions club, or their author events, which, for a relatively new bookstore, is formidable. Literati has hosted readings by such novelists as Matt Bell, Christopher Moore, and Kazuo Ishiguro, and poets Anne Carson and Anne Waldman. Marlon James will visit in October. In June 2014, David Sedaris chose Literati to debut his book, Exploring Diabetes with Owls.

Michael and Hilary were married in June 2013, two months after opening the bookstore. They live one mile away from their store. Literati is genuinely a labor of love, and one very much indebted to the city in which it has put down roots.

“I view what we’re doing here as just a continuation of the rich history of bookselling in Ann Arbor,” Michael says. “All the success and growth that we’ve experienced is because of the booksellers who’ve been here before.”

Downstairs, on Literati’s lower floor, a vintage Smith-Corona typewriter sits on an old, wooden desk, before a wooden chair. A fresh piece of paper is placed into the typewriter every day, and people are encouraged to compose their thoughts and musings. On the day I spoke with Michael, there was a young woman sitting at the desk. She looked to be the same age I’d been when I used to spend long days hidden away in the Liberty Street Borders. I waited until she finished, then I went to read what she had typed.

“I come here before my therapy sessions every Wednesday,” she had written. “A little extra calm to ease my mind. It is safe here. Thank you for this place.”

Santi Elijah Holley’s short stories and nonfiction have been published in VICE, Monkeybicycle, Straylight, and SmokeLong Quarterly, among other periodicals. He is an arts and music writer for The Portland Mercury, and he works in the Publicity department at Powell’s Books.

This post is dedicated to the loving memory of Susan Finley.

Murder and Magic Abroad: an Interview with Katie Crouch