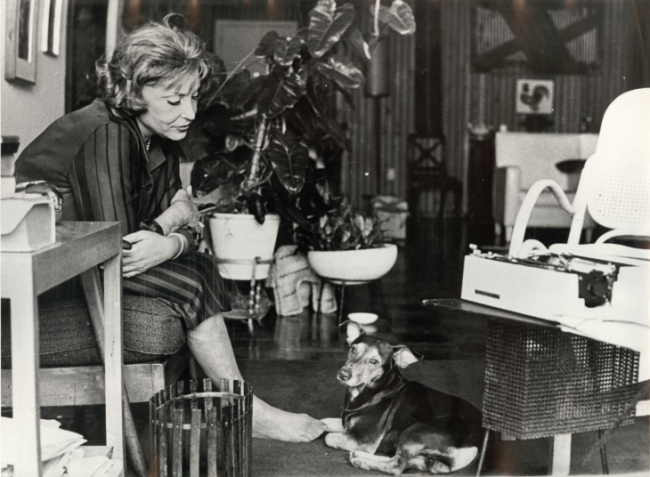 In honor of the upcoming New Directions release of Clarice Lispector’s Complete Stories, we decided to hand The Open Bar keys over to the Brazilian legend. Tune in all week for previously unpublished and newly translated stories, as well as reviews and thoughts on her work.

Today, we bring you the previously unpublished story (!!!!!) “Covert Joy.”

She was fat, short, freckled, and had reddish, excessively frizzy hair. She had a huge bust, while the rest of us were still flat-chested. As if that weren’t enough, she’d fill both pockets of her blouse, over her bust, with candy. But she had what any child devourer of stories would wish for: a father who owned a bookstore.

She took little advantage of it. And we still less: even for birthdays, instead of at least a cheap little book, she’d present us a postcard from her father’s shop. Even worse, it would be a view of Recife itself, where we lived, with the bridges we’d seen countless times. On the back she’d write in elaborately curlicued script words like “birthday” and “miss you.”

But what a talent she had for cruelty. She was pure vengeance, sucking noisily on her candy. How that girl must have hated us, we who were unforgivably pretty, slender, tall, with flowing hair. She performed her sadism on me with calm ferocity. In my eagerness to read, I didn’t even notice the humiliations to which she subjected me: I kept begging her to lend me the books she wasn’t reading.

Until the momentous day came for her to start performing a kind of Chinese torture on me. As if in passing, she informed me that she owned The Shenanigans of Little Miss Snub-Nose, by Monteiro Lobato.

It was a thick book, my God, it was a book you could live with, eating it, sleeping it. And completely beyond my means. She told me to stop by her house the next day and she’d lend it to me.

Up until the next day I was transformed into the very hope of joy itself: I wasn’t living, I was swimming slowly in a gentle sea, the waves carrying me to and fro.

The next day I went to her house, literally running. She didn’t live above a shop like me, but rather in a whole house. She didn’t ask me in. Looking me right in the eye, she said she’d lent the book to another girl, and that I should come back the next day. Mouth agape, I left slowly, but soon enough hope entirely overtook me again and I started back down the street skipping, which was my strange way of moving through the streets of Recife. This time I didn’t even fall: the promise of the book guided me, the next day would come, next days would later become the rest of my life, love for the world awaited me, I went skipping through the streets as usual and didn’t fall once.

But things didn’t simply end there. The secret plan of the bookseller’s daughter was serene and diabolical. The next day, there I stood at her front door, with a smile and my heart beating. Only to hear her calm reply: the book hadn’t been returned yet, and I should come back the next day. Little did I know how later on, over the course of my life, the drama of “the next day” with her would repeat itself with my heart beating.

And so it went. For how long? I don’t know. She knew that it was for an indefinite time, until the bile oozed completely out of her thick body. I had already started figuring out that she had chosen me to suffer, sometimes I figure things out. But, in actually figuring things out, I sometimes accept them: as if whoever wants to make me suffer damn well needs me to suffer.

For how long? I’d go to her house daily, without missing a single day. Sometimes she’d say: well I had the book yesterday afternoon, but you didn’t come till this morning, so I lent it to another girl. And I, who didn’t usually get dark circles under my eyes, felt those dark circles deepening under my astonished eyes.

Until one day, when I was at her front door, listening humbly and silently to her refusal, her mother appeared. She must have been wondering about the mute, daily presence of that girl at her front door. She asked us to explain. There was a silent commotion, interrupted by words that didn’t clarify much. The lady found it stranger and stranger that she wasn’t understanding. Until this good mother understood. She turned to her daughter and with enormous surprise exclaimed: But that book never left the house and you didn’t even want to read it! 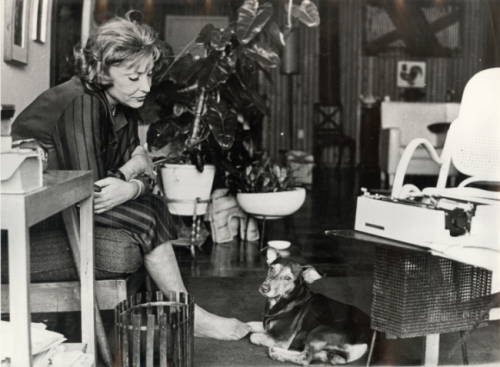 And the worst thing for that woman wasn’t realizing what was going on. It must have been the horrified realization of the kind of daughter she had. She eyed us in silence: the power of perversity in the daughter she didn’t know and the little blond girl standing at the door, exhausted, out in the wind of the streets of Recife. That was when, finally regaining her composure, she said to her daughter firmly and calmly: you’re going to lend that book right this minute. And to me: “And you can keep that book for as long as you like.” Do you understand? It was worth more than giving me the book: “for as long as I liked” is all that a person, big or small, could ever dare wish for.

How can I explain what happened next? I was stunned, and just like that the book was in my hand. I don’t think I said a thing. I took the book. No, I didn’t go skipping off as usual. I walked away very slowly. I know that I was holding the thick book with both hands, clutching it against my chest. As for how long it took to get home, that doesn’t really matter either. My chest was hot, my heart thoughtful.

When I got home, I didn’t start reading. I pretended not to have it, just so later on I could feel the shock of having it. Hours later I opened it, read a few wondrous lines, closed it again, wandered around the house, stalled even more by eating some bread and butter, pretended not to know where I’d put the book, found it, opened it for a few seconds. I kept inventing the most contrived obstacles for that covert thing that was joy. Joy would always be covert for me. I must have already sensed it. Oh how I took my time! I was living in the clouds …There was pride and shame inside me. I was a delicate queen.

Sometimes I’d sit in the hammock, swinging with the book open on my lap, not touching it, in the purest ecstasy.

I was no longer a girl with a book: I was a woman with her lover.

Watching Sandra Be Loved By God

A Slick Six from Camouflage Country