On the last day of February 2016, a leap year, a man was executed in the dark recesses of Adiala Jail in Rawalpindi, Pakistan. His crime was the 2011 assassination of the Governor of Pakistan’s Punjab province. The killer, Mumtaz Qadri, had been Governor Salman Taseer’s bodyguard. Qadri was motivated by the Governor’s support of a Christian woman who had been accused of blasphemy. Taseer had publicly criticized Pakistan’s ambiguous blasphemy law, a weapon in the hands of the country’s Sunni majority. For this, he met his death. After the shooting, Qadri did not run or hide; instead he proudly proclaimed the righteousness of his act.

Assassinations are, by nature of their horror, their sudden and stunning infliction of death, seismic events. In the case of this assassination, the horror did not end. As Qadri was arrested and a murder case registered against him, hundreds of thousands of men took to the streets to protest his being charged as a murderer. The man had done the right thing, their leaders, scions of Pakistan’s many Islamist groups, proclaimed from the stage. The riled up and rage soaked crowds that pulsed through the streets demanding Qadri’s freedom agreed. And it was not simply the uneducated, the easily angered or the ignorant that supported Taseer’s murderer. At Qadri’s first court appearance, hundreds of lawyers, supposedly enlightened men suited in the white and black that Pakistani courts require of advocates, festooned the man with rose petals. So it was for every single court hearing after, the rabble on the streets and the supposedly educated in the courts united in support of an avowed killer.

Political comparisons are inherently approximate, but nevertheless necessary and even instructive. In the aftermath of the election of Donald Trump, American liberals betrayed a sense of apprehension that felt familiar to me from the time I spent in Pakistan during those years. The rage and anger of Trump rallies, their open denunciations of tolerance, their garish greed for dominance and, beneath it all, their strategic use of desperation as a means to whet the poor against the weak, bore more than an incidental resemblance to rallies that have raged through Pakistan in the past decade. These Pakistani processions of rage railing against America and its incursions, demanding the executions of Shia Muslims, inaugurating pogroms against Pakistani Christians, rely crucially on the same paradigms of hatred and exclusion, of populist pandering that have been witnessed in the United States in the past year and a half. Exchange hatred of China and Mexico and Muslims for a hatred of America, India and Israel, add railing against the “unpatriotic,” the wink and nod to intimidation of minorities, and you have a skeleton strung of the same bones, if of different flesh. 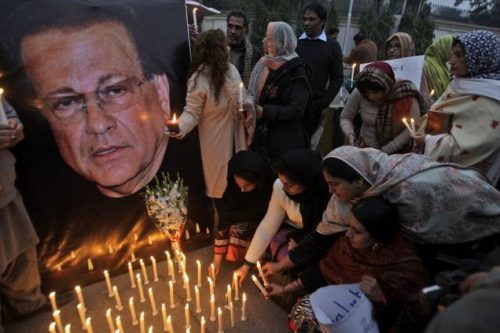 Pakistani liberals paid a price for a nation instigated to hate them; consider them the inauthentic, insufficiently Pakistani and smugly elitist. Anti-intellectualism was sold as virtue and imbued with the heroism of bringing down the avaricious elite that cared nothing about them. The actual elite, padded by armed guards, offshore accounts and European real estate holdings, did not suffer. It was the scholars, the lawyers who insisted on defending those accused of blasphemy, the activists who insisted on staging rallies, however small, for love instead of hate, that paid the price.

Those who did not die had to hide. In the years following Taseer’s murder, literary festivals had to become small, quiet affairs to avoid bomb threats. Concerts could not take place in large venues for the same reason. Then in 2015, an activist named Sabeen Mahmud was killed on the way home from the small literary and creative arts space she maintained. That space, “T2F,” a rented room on the upper floor of non-descript building, had hosted activists from Baluchistan who were protesting the state’s human rights abuses against indigenous Baluch. When her killer was caught, he confessed that he had murdered her because he did not like what she had to say. There is a video of the evening at which he made up his mind. In it, he sits among the audience at an event at T2F. The topic that day was urban sustainability.

The United States, of course, is not Pakistan. Its civil society and institutions, one hopes, are robust enough, its democracy old enough, to withstand an onslaught of illiberalism. There is, however, a terrible and similar cruelty at play when the poor are promised a magical reversal of their misfortunes if they agree to hate enough people. American liberals, like Pakistanis at the outset of their own country’s move to the right, seem in the aftermath of their electoral cataclysm uncertain and self-doubting. Some seem so crushed by electoral loss that they seek to disavow the platform that made them better, if not the victor. Calls to end identity politics, to move away from the concerns of minorities and toward a more effective pandering to white majorities, ring out on social media and in political columns. To hear them and read them is almost more frightening than the grim November night that has occasioned the conversation.

On this last fact, Pakistani liberals may have some small but hard-won lessons to offer their American counterparts. Even with death hanging over their heads, Pakistani newspapers have continued to publish challenges to the blasphemy law, to Islamism, to misogyny. Pakistani singers still appear on stages that may be bombed. Pakistani lawyers squeeze into courtrooms ringed by angry mobs, and a whole lot of others, teachers and professors, try to underscore that the narrative of intolerance that dominates is not the only one, nor the right one. Being outnumbered has not deterred them.

The days after Mumtaz Qadri’s execution this February were also dark ones in Pakistan. Many thousands took to the streets, angry that their “hero” had been put to death. A video of him, cherub faced and singing a religious hymn into a cell phone camera in his prison cell, went viral. Watching so many so enraged and so opposed to the values of religious tolerance, rule of law, and democratic governance, provokes deep desolation and even dissolution. But this same moment of uncertainty can also be one of realization and resolve, a time for blunt assessment of the work to be done. Pakistani liberals have faced that moment, persevering sometimes, splintering at others. It is now America’s turn. If American liberals look beyond their borders, they will find many friends who can understand the despair of their present, but also point them to the possibility inherent in the future.

Rafia Zakaria is the author of The Upstairs Wife: An Intimate History of Pakistan (Beacon, 2015) and Veil (Bloomsbury, 2017). She is a columnist for Dawn in Pakistan and writes the Read Other Women series at the Boston Review. You can follow her at @rafiazakaria.