was from the Musée d’Orsay: the bright, vaulted windows, gilded finishings, and me, smiling underneath. I thought I’d have time to see most of the museum before the kids’ school let out, but I moved too slowly among the impressionists, then had to hurry with the rest. I did stop for several minutes in front of Bonnard’s Women in the Garden. So comfortable, in their happy dresses among all that growth; they fit. They might have been less comfortable had they known a painter was crouched among the shrubs, hurriedly sketching their every contour. Or maybe they did know, and didn’t care. No—they knew, and enjoyed pretending not to.

I’m cultivating my digital poker face. The album is called “Paris in the Fall,” like Ella sings. It always makes me think of the optical illusion: 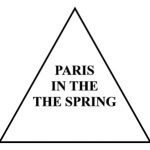 Your eye doesn’t see the second the because your mind doesn’t want to.

I BOUGHT A CHICKEN

at the butcher on my way home. It’s in my tiny oven now. Smelling good. I dressed it with lemons and rosemary and garlic, which is more than they do to the ones they have turning in the window, and theirs are delicious alone like that.

With the baking dish perched on the two-burner stove I transfer the chicken to a plate, using a spoon and fork, nearly dropping it on the linoleum. I dump the juices and dressing things into a skillet, splashing some on the glasses stacked in the draining rack. The sink warps—snap!—under the hot casserole. I love the steam that answers with a hiss when I turn on the faucet; I love seeing the sticky bits start to come loose from the bottom.

I pour some of the Sémillon from the fridge into a tumbler and some into the pan on the stove, seeing that the casserole melted a corner of the front burner knob. For a few minutes I sip and stir. Wine for the chicken and wine for the cook, just like Julia Child, another American that Paris made room for. I watch the sauce reducing, thickening. The rosemary pops and crisps; the needles are so nice when they’re lightly burnt.

The breasts I’ll save for sandwiches. Tonight, a thigh and a hunk of baguette, some more wine, the second half of yesterday’s artichoke. Me at my little desk. The slowness that made this plate is warm around me.

all my clothes and bedding, are holding tight to the stink of roast chicken. I wasn’t sure if it

would be noticeable, but of course most things are noticeable to children.

The kids’ tutor, Leo, is over at the Dufour’s flat this afternoon. We chat in the kitchen during a break in their lesson. He doubtless smells the chicken, too.

“So, how are you finding the city?”

“And the Dufours, they’re good, ah? You’ll be with them for the year?”

“A little distracted today, maybe, taking advantage with being…”

“I’ll come sit with you guys, they’re still a little scared of me.”

“Yes, thanks, fear is, uh, the first ingredient for learning.”

IN THE METRO STATION

there’s a poster, words from Edith Piaf, which I think translate:

on the Paris roofs

All my metro rides seem to me one continuous sliding. When I am down here I rejoin a parallel self, the one that is always moving, in the thick of everything, underneath it.

A MAN WITH AN ACCORDION

boarded the 9 at Bonne Nouvelle, and I turned to the window by my small seat. But when he heaved into song it wasn’t the usual polka, he was playing “Poker Face,” and I looked back to him fast. Lady Gaga? Where did he get that? A silly grin distorted his full apple cheeks, but there was nothing false to him, and nothing apologetic. The commuters smiled against themselves. He got off with me at République, and his florid wheezing pushed me and the tide of commuters all the way to the Line 11 transfer.

IN THE HEADLIGHTS OF THE TRAIN

I almost always have something, not a vision or an impulse, but some idea of jumping onto the tracks. It doesn’t come from wanting to do that. I’m not sure where it comes from.

I want to go home and write to my family, friends, tell them that if they survive me, if I die in something that looks like an accident, or any way at all for that matter, it won’t be by mistake, and it won’t be their fault.

I want them to know that I am unafraid. I am quite suddenly sure that when I go, whatever the circumstances, in truth it will be only this: my nod, into an eye large and distant, saying, “Now will do.”

A SERIES OF TEXTS FROM MY LANDLORD

who is supposed to fix the heater tonight:

An opera singer crossed the restaurant where I was sitting
Singing aloud like on the Bastille opera scene
Singing a love song to the waitress
Then singing upstairs, where even the king goes alone
Now I’m close to jumpin into line 8 flying to Balard.
But they have no direct flight

I left my camera on the bus. I call you back.

in the evening’s wifi glow, I am alone with my notifications.

I wonder about getting a cat.

I think I see my phone light up with someone’s distant affection. But it is only light from something passing by my window, which reflects off the screen, seizing me, and moves on.

Amanda McCaffrey holds an MFA from NYU’s Writers Workshop in Paris. She lives in Oakland, California. This is her first publication.