The first thing you should know is that I had the privilege of witnessing nearly every poem in Amanda Nadelberg’s remarkable new book, Songs from a Mountain, move through multiple draft stages and sometimes into radically different forms.

Amanda and I have been friends for a long time. Since her Minneapolis days, when she lived in a 1920s apartment with iron radiators that clanked and hissed six months out of every year. This was in the Linden Hills neighborhood, which is neither terribly hilly, nor full of an unusual number of linden trees.

So how can it be that Amanda’s poems are still so wonderfully mysterious to me? I should be the world’s defining expert, but I still feel like a total novice. I think it would be easier for me to explain lava. Songs from a Mountain is swirling and immersive in ways that make it very difficult to describe outside of the poems. As its title suggests, it’s a book that invents a new kind of mythic singing for our distracted, troubled age.

John Ashbery says of this book: “Amanda Nadelberg’s poetry resembles a city where all kinds of things are happening at once, some of them funny and others pretty scary. The quasi-epic ‘Matson’ takes the form of a swarm. Suddenly words, thousands of them, have accrued to this particular subject; no one knows why. Its mass is almost frightening but good to be with. Songs from a Mountain is a dizzying achievement that rings out loud and precise and clear.”

Amanda Nadelberg: Oh good one. I work in the city in the afternoon for a nonprofit environmental law firm, so I spend the morning at home usually. I wake up early, I enjoy coffee, one cup now. I walk up these crazy staircases and little paths on the Oakland / Berkeley border that have helped me improve my decision making skills and also function as a natural gym, of which I make use now that I have this new bionic hip (five years now). Sometimes I walk up the hills with my next-door neighbor. I’ll do side jobs like editing for other people in the morning, sometimes I write but not regularly. I read. I read the news and send articles to my parents. I write you and others emails. In the late morning I walk thirteen minutes to Bart and wait for about seven more because I’m always early even though it only takes me thirteen minutes to walk a distance I allow twenty for, and then I ride twenty minutes more into the city (if I’m lucky there is a dance performance and clapping on the train car) where I go to work and as a Receptionist and moonlight there (in the day) as a therapist/candy-bartender/life guru to the good people I work with, telling them about companies that stand by their return policies (L.L. Bean) and Marie Kondo (I’ve converted at least 2 people) or how you should only buy plane tickets on Tuesdays—I let them know when cookie-cakes, flowers, and their packages have arrived, I ask a lot of questions, sometimes about what they’re reading and watching, and on one occasion accidentally helped a guy remember it was his anniversary—while the doorbells and phones ring, faxes come and go. At 3:00 each day I have a 20-minute break and take a small walk in the FiDi, maybe I find a penny, I began to pick them up again two years ago, and I hear what people say and what they’re constructing today, who is honking at whom. The city still feels make-believe to me, how can it go on? I go home after 5 and sometimes take the bus with my friend (it’s slightly more expensive but a lot nicer of a way to go home, above the Bay than below) or sometimes get squished on the train, watching passengers be horrible to each other. I walk home, I make dinner, sometimes I meet friends. I don’t have a dishwasher—I wonder if I ever will—I wash the dishes. My closest friends don’t live here so I communicate with them. I don’t know if I’ll ever enjoy texting. I use the telephone. I talk to my sister. I try to remember to do 20 or 30 pushups, since last December, which I associate with beginning to watch Game of Thrones but I think it’s unrelated. I look at the calendar a lot like it’s a book to read, not with appointments, just the empty days. I go to bed at a reasonable hour because sleep is important, it’s nature’s best beauty aid, no it’s not (yes it is).

DG: Interesting that you don’t mention any kind of daily “poetry practice” (poetry is not pushups!), and yet the poems in this book exude an unmistakeable dailiness. Sometimes I even experience them as elegies for the very dailiness out of which they appear to have sprung. Did these poems just sort of occur to you everywhere? I’m thinking of that Ashbery quote where he says he senses poems going on all the time in his head, and to write one he simply has to reach up and snip off a length. 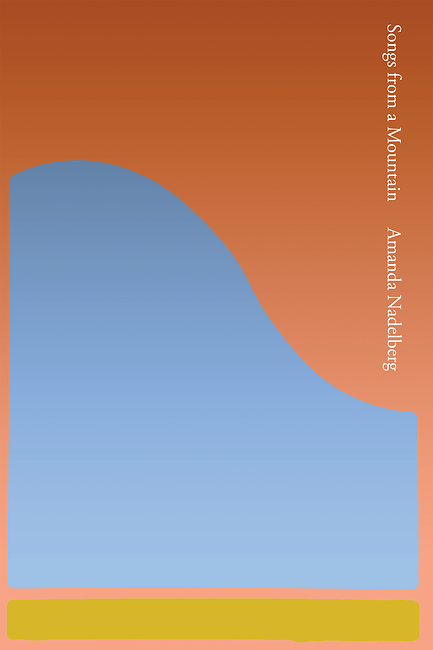 AN: In the past couple years I’ve tried not rushing to record things when they happen, to see if they’ll come back (or if other things will) when I make time to write. I’ve lost a lot of lines, surely, but I’ve also become more trusting of the whole process. I’ve never been someone who writes every morning, and I don’t think I’ll ever be. (I’d rather do something else than sit there and force a bad poem into the apartment.) And while I do a lot more editing than I did ten years ago, I see how a few of the poems, at least the ones with longer forms, create a shape for days to fit into. I think you’re right, that there is an accumulation of thinking and then a form is sprung, and the actual writing becomes a way to record time. I realized in the last few years that it’s good to use the life you’re in to make forms. When I was little and on a swim team I’d create these little games to combat the boredom of laps, (i.e. when I’m between the flags and the wall a shark can get me, or when I’m between the flags and the flags a shark can get me, etc.) and in the past few years I see how I’ve found my way back to that kind of logic in making forms for poems, and once the form is there—however imaginary—it’s a container. Form is another word for propulsion. Matson, for instance, I began on Memorial Day weekend, 2013, and ended by Labor Day, and I spent the summer in it. That was a container (and rudimentary form) for those particular days. And when I wanted to write, the writing went into that.

DG: So let’s talk about Matson for a second, an important poem to this book. Here, not only is form a “container for…days,” as you say, but the poem’s triggering subject is a particular form of container: a shipping container. For those who don’t know—which is probably nearly everyone—what is Matson? And how did your daily Matson experience get poured into this particular poem container?

AN: I started working where I do in the city in the fall of 2012. The first day, while commuting—nervous, disoriented by Bart manners and protocol—I noticed as the train went past the Port of Oakland these beautiful arrangements of shipping containers, and they appeared to me as a concrete poem in space, and I wrote in my notebook a little picture as if they were a concrete poem with the accompanying sounds of “Matson, Matson, Matson!” Each day the configuration would be a little different, a few of the vessels removed or delivered. On some days the big Matson ship would be there too, picking up things for the sea. And there’s this actual audible element, when the train goes by the Port, it slows a little and in slowing it makes a new note—sometimes I wonder about commissioning a composer to write the music of the commute, there are also bell sounds when you’re in the tunnels approaching a station—I think the note by the port is a little higher, and it kind of emits an “Aaaaaaaaa!” Holy Heavens sound which tends to make me turn from the highway to the water and there would stand this little concrete poem of Matsons built. So since that first day I knew that I wanted to write a poem called Matson but it wasn’t until eight or so months later that I realized the form: a simple doubling of stanzas creating accumulations of lines and then decreasing back into a couplet. (But! Deciding to begin the form happened to directly precede a listserv job blast about a position at the Matson shipping HQ. I almost wept from the coincidence which became a kind of mandate. I mean what are we looking toward in life if not that?) To answer your other question, Matson is a transportation company with the mission to “Move freight better than anyone.” I think it also used to serve as a tourism cruise company, but now no more. The Matson building on Market Street is also beautiful, though I never noticed it until long after the poem was finished. In the winter of 2014, Matson’s dock moved, so it’s harder now to see from the Bart rails. It’s so funny how cumulative increments of time prove the changes in things. For instance, there have been three different flower shops in the same little spot on my walk to the train station. Still flowers. But textured depictions of time and efforts in the form of brick and mortar.   END_OF_DOCUMENT_TOKEN_TO_BE_REPLACED