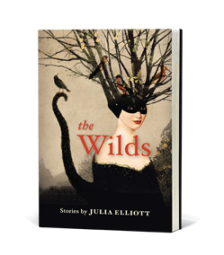 Julia Elliott’s The Wilds will be published in October by Tin House Books.

Jeff VanderMeer: What do texture and tone mean to you when writing a short story? And do you have to get them right before you can finish a rough draft?

Julia Elliott: As a hedonistic texturist, my initial impulse is to cram every particle of a story with texture and tone, so that each and every sentence bursts with perfumed, purple language like an overripe fig—an oozing, fermenting, parasite-infested mess of a fig. When I return to early stories, I’m struck by the electric, visceral moods that end up going nowhere—especially plot-wise. Although I’m now more ruthless about gagging and straight-jacketing the bad poet within, I don’t feel at home in a narrative unless I’ve created a palpable texture that I can inhabit as I work out character motivations and plot, elements that occur less instinctively for me.

JV: Where might we find the autobiographical in your fiction? For example, have you ever lived with a feral family? I hope you say yes.

JE: Although all of my fiction contains mutated autobiographical genes here and there, only a few stories in the collection are semiautobiographical, though ridiculously exaggerated. When I was a child, my dad liked to invent diseases (“scabrunocatosis,” for example, a condition where the nose bone never stops growing, eventually bursting through the skin of the unfortunate sufferer’s nose to wreathe the head in a tangle of bone, or “Puerto Rican trench mouth,” a gangrenous infection caught by kissing cats on the lips). One disease that he claimed I had as a child was an “incurable hyperbolic condition.” He got to witness the adult manifestation of this pathology when he read my story “The Whipping,” in which the father character is a grossly exaggerated version of him, with all kinds of grotesque flourishes thrown in (though my father once fried up a mess of robins that my little brothers shot, he performed the task with considerably less dramatic flair and without the inspiration of Jim Beam). The three brothers are absurd versions of my three brothers, the mother a ridiculous fictionalization of my mother. To answer your question about living with a feral family—all families with young children, especially large families, seem kind of feral to me, and my own was no exception. In “The Whipping,” I exaggerate the hellion qualities of the twins and the wildness of baby Cabbage, but the tone and texture of this childhood wildness seem true to me. Speaking of feral children, the feral boys in “The Wilds” bloomed from a very small kernel of reality—a rumor, really, about a family with eight male children—eight brawny brothers whose mother kept two industrial freezers in the garage. Although I knew only one of these guys (vaguely, in college), this anecdote festered in my mind for years. I wondered what weird genetic or hormonal quirk led to the production of an exclusively male brood. Although I’d heard that the harried mom kept over a dozen gallons of frozen milk in reserve for her ravenous sons, my imagination rioted as I envisioned neatly wrapped packages of mysterious meats, the kinds of chops werewolf-children or vampire-toddlers would devour raw.

JV: You write stories that adhere to a nominally realistic view of the world, but there’s also a strong sense of the absurd running through them. Sometimes it’s overt, and sometimes it’s sly. Is this something you try to tease out further in revision, or an impulse you have to tamp down? Does the balancing act come naturally to you?

JE: I’m going to blame it on the genetic pathology I was born with, the “incurable hyperbolic condition” that my father saw signs of as soon as I learned to talk. It’s an impulse that may spring from my Southern heritage—centuries of ancestral looniness—combined with enduring the kinds of filthy, Southern subtropical summers that breed hosts of yet-unidentified brain parasites. The disease infects everything I write from the moment of mental conception, though sometimes the putrid purple that erupts has to be disinfected and excised, spirited away in stainless-steel medical bowls and dumped into the desktop trash can.

JV: How much of the divide between the real and the perhaps not-so-real in your stories is a function of how your characters see the world?

JE: Although I understand the binary of real and not-so-real and am very conscious of crossing into the unreal, plot-wise or stylistically, the permeability of the border between the two is less about my characters’ worldviews and more about the ways I perceive language and genre. Not only is all fiction artificial, from the “grittiest” “realism” to the “frothiest” “fairy tale,” but there’s also a good bit of poetry and fantasy in “scientific” writing, gap-filling cultural projections that become hilariously obvious when the “science” in question is outmoded (like Renaissance gynecology, with its misogynous monsters and marvels, or Freudian psychology, with its vaginal orgasms, frigidity, and penis-babies). Interestingly, the scaly dragons that slithered from the suspect wombs of early modern women do evoke glaringly obvious “truths” about the fears and obsessions of that time period’s patriarchal medical institutions. For me, minimal evocation of “unreal” elements is the best way to hit upon certain emotional or philosophical insights, though other writers do this more effectively by adhering to a strict “realism” or throwing themselves whole hog into “fantastical” worlds. Both methods, to be effective, require a meticulous mastery of language and tone. To me, genre is not a package for a story, but a vehicle to be used within it—and some of my favorite fictions genre-mix liberally and magically.

JV: There’s a sly way in which you kind of comment on the randomness and spontaneity of the world in your stories. This often manifests through your dialogue, and I’m wondering how much you work on dialogue from draft to draft. It’s an incredibly rare gift to make speech sound both off-the-cuff and essential to the story rather than just random.

JE: That’s very encouraging to hear, because I often feel like I’m floundering when writing dialogue. I frequently cover two or three pages with conversations that I end up paring down to the few exchanges that seem relevant to the action at hand. Whereas I can sometimes nail other elements on the first draft (like “tone and texture”), dialogue is something that I tend to get “right” after one or two revisions.

JV: “Regeneration at Mukti” is a wonderful story that’s got a great manic energy to it but also a sharp eye for detail that both skewers our present and helps the reader suspend disbelief about its future milieu. Was there any particular spark or catalyst for writing it, and was the first line always “Call me a trendmonger, but I’ve sprung for a tree house.”?

JE: Again, I’m going to blame it on my “incurable hyperbolic condition.” I once suffered a bout of poison oak with such horrific yellow pustules that I developed oozing, Popeye-sized forearms. When the boil-mass eventually crusted over, I felt like I was pupating, like I was about to slough a scabby layer and that some other “creature” (perhaps radiant, perhaps monstrous) would crawl from the shed casing. I devoted a great deal of mental energy to imagining different forms of human pupation, and then I forgot about the whole thing. Years later, as I contemplated the weirdness of Botox (how bizarre is it to inject a muscle-paralyzing toxin into your face?), I began to imagine absurd futuristic beauty technologies involving nanobots and stem cells. One day I read a trashy Internet article on plastic-surgery safaris, which made me laugh darkly, envisioning bandaged neurotics exploring jungles in jeeps, peering at elephants and baboons, exploiting some “developing” economy and contemplating the majesty of nature as their whittled noses or cheekbone implants healed. I’ve always been struck by the ways the beauty industry co-opts a kind of Zen-infused self-help when hawking its processes, particularly those involving expensive spas, and this led me to imagine Mukti, a place that melds every trendy “holistic” approach with religious dogma and freaky futuristic technologies, packaging what is essentially a vain and illogical desire for eternal youth as a spiritual transformation of the self. In the story, which takes place on a nameless Caribbean Island, the patients are infected with “controlled pathogens” through “oils, funguses, bacteria, viruses, and parasites.” As their skin transforms into a scabby rind, a kind of full-body crust that they will eventually shed to reveal luminous rejuvenated epidermises, they undergo all kinds of ridiculous therapies: injection of nanobot serums, leech therapy, beer-bath isolation tanks, and so forth, all the while enjoying the island’s organic haute cuisine and the luxe quarters of pseudo-rustic tree houses. Although the story satirizes the excesses of the spa and leisure industries, I found myself sympathizing with the female narrator, and the narrative began to explore her relationship with a fellow patient, which progresses as their physical exteriors become increasingly grotesque. To answer the second part of the question: yes, the story originally began with the line “Call me a trendmonger, but I’ve sprung for a tree house.”

JV: These are unique stories that don’t really owe anything to anyone, in my opinion. But sometimes there are glints and glimmers of writers like Shirley Jackson and Kelly Link. Are there are any touchstones that you feel a really personal connection to?

JE: Although I really wanted to answer this question with a five-page, alphabetized list of authors I love (it’s very difficult for me to narrow it down), the time constraint made such a response unfeasible.

Julia Elliott’s fiction has appeared in Tin House, the Georgia Review, Conjunctions, Fence, Puerto del Sol, Mississippi Review, Best American Fantasy, and other publications. She has won a Pushcart Prize and a Rona Jaffe Writer’s Award. Her novel The New and Improved Romie Futch will be published by Tin House Books in 2015, and she is currently working on a novel about Hamadryas baboons, a species that she has studied as an amateur primatologist. She teaches English and women’s and gender studies at the University of South Carolina in Columbia, where she lives with her daughter and husband. She and her spouse, John Dennis, are founding members of Grey Egg, an experimental music collective.

Jeffrey VanderMeer‘s most recent fiction is the NYT-bestselling Southern Reach trilogy (Annihilation, Authority, and Acceptance), all released in 2014. His nonfiction has appeared in the New York Times, the Guardian, the Washington Post, New York Magazine online, and the Los Angeles Times. Previous novels include the Ambergris Cycle, with nonfiction titles including Booklife and Wonderbook. He lives in Tallahassee, Florida, with his wife, the noted editor Ann VanderMeer.