These are the bands
(listened to by me):

These are the bands

(listened to by him):

Did it rain all the time? Not all the time. Some sunlight here and there. Trees everywhere. Heroin everywhere. Gus Van Sant’s Portland. Skaters vs Rockers. Straight Edge vs Skinheads. Fuck the Skins! Fuck the Southside White Pride! Punks vs Everybody. I was a skater. Graduated from Mrs. A’s to Cal Skates to Cal’s Pharmacy to Rebel Skates. I could ollie down a flight of stairs. Nollie. No Comply. Not sick but not a poser. Once a friend flubbed a railslide slammed hard into the handrail. His crotch was bleeding through his jeans. He used duct tape to repair his balls. Turn up the Circle Jerks! I couldn’t grow my hair long enough to be a rocker. You could get a pretty good Mohawk to stand up with enough egg whites and Aquanet. My mother said she liked the Suicidal Tendencies even though she couldn’t understand what they were saying and their name made her nervous. Hypodermic needles made me nervous. I stayed clean because I was a coward. Stacy Peralta for President, said the bumper sticker on our family car. All I ever did was skate and listen to music in my room with the door closed. When I took a bath I would set my new skate deck on the toilet so I could stare at it. I had never even read a poem. I didn’t know what a poem was.

My mom worked like a dog to keep us in Catholic school, Christian Brothers, through a series of schemes that mostly flew and still I did my best not to read anything, no, not anything, not anything at all. Now as an adult I have to make up for it. Sorry, Mom.

Reading The Iliad and The Odyssey in my thirties.

Moving backward in time through poetry like this is also moving forward, rereading automatically every contemporary poet I ever loved.

Mud man punk rocker. I came across his poems for the first time in Paul Muldoon’s anthology The Faber Book of Beasts. I couldn’t believe what I was reading. He can start and stop on a dime. He does. Breakneck speed. No punctuation. It reminded me of something. What did it remind me of?

John Clare could play the fiddle, some gypsies taught him how.

I like to think he was good at it.

He could have started his own band!

This from John Clare’s “The Hedgehog”:

I hear a half-broken drum kit in that dyke. I hear three loud chords run the dogs. Feedback in the fields. And then the whole thing falls apart at the end. Everything stops dead after And no one cares. A loud-as-fuck caesura. A guitar smashed against a speaker. And then the whole world gets terribly quiet and still the strife goes on.

Who moves this fast?
Who is in danger of coming apart at the seams all the time?
Now I remember what Clare reminded me of. 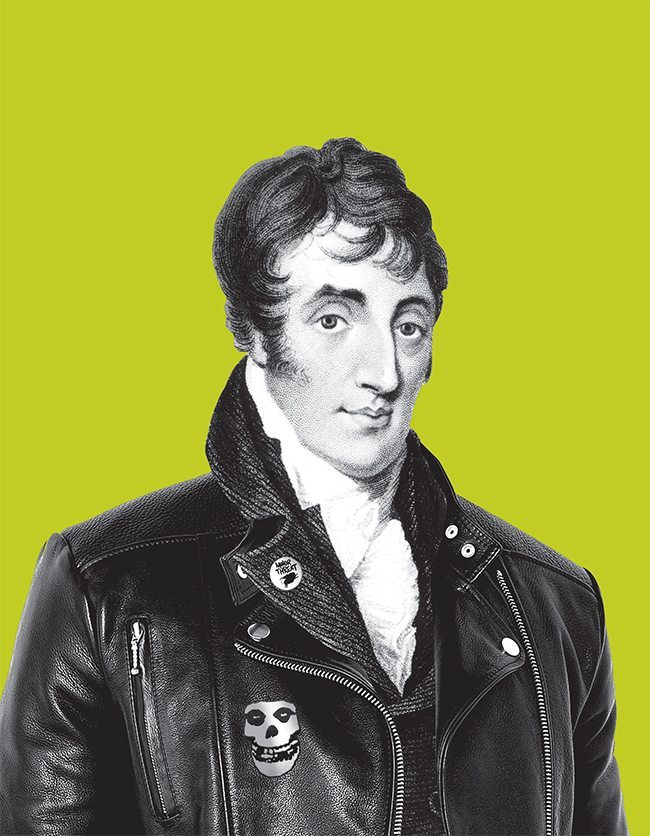 This from Minor Threat’s “Cashing In”:

Two guitars and a drum.
A mosh pit.
A black eye and a broken jaw.

Gypsies with shaved heads and Mohawks.

Did it rain all the time? Not all the time. Some sunlight here and there. Hay everywhere. Ale more potable than water. In love with a pure rural old-school idea of HOME. In love with his high-school sweetheart, called Mary Joyce. In love with writing poems. In love with Byron. The smallest change in the landscape could tear his mind up. His heart. In love with CHILDHOOD, where all of this could stay perfect and live forever:

The past it is a majic word
Too beautiful to last,
It looks back like a lovely face—
Who can forget the past?

There’s no place like home.
So, where am I?

Before my son was born.
Doing his thing in the dark, his mama said.

I would sit on the floor next to the worn yellow couch where my wife sat and put my mouth next to her huge watermelon stomach like it was a microphone and read John Clare poems to whatever was inside. Whoever.

The past it is a majic word

Too beautiful to last,

Who can forget the past?

For months I had been flooded with memories of my childhood. Skateboards. Cassette decks. Black Flag singing “Gimmie Gimmie Gimmie.” Pizza. Television. Cheers and The Dukes of Hazzard. Physical memories humming along right beneath my skin. I could suddenly remember every smell in the house I grew up in. Superman sheets on the bed. Dog piss in the wall-to-wall carpets. The mown grass. Rain.

You whoever you are in the whorl of your mama’s stomach sitting inside a dark radio listening to my voice.

You be a kid. Come out, come out. I want to read you some poems. I want to start a band.

I want to see your face.

Before my son was born.
His mama asleep but the two of us awake.

Stretching his legs.
Punching the dark.
Humming along.

Kicking away in the middle of the night. That would be him jumping in place as I watched the comforter move in a sliver of streetlight. Whispering lines from Clare. To him. To the room. To the dark. To anything at all. Do you want to live inside a poem? We called him “The Thing.” Do you want to see what a poem looks like in the air?

Each noise that breathed around us then
Was majic all and song . . .

The wild bee in the blossom hung,
The coy bird’s startled call . . .

Could he hear everything? He could hear everything. Hey now, hey, this is my voice. Coming to you live. This is what a poem can sound like. 100 mph. Love songs about childhood and birds. Straight up from the Helpston mud.

Clare was always trying to get home.
In poems.
In person.

He moved away (once) from his home cottage but the slight change in landscape turned his mind overcast.

He spent time (twice) in asylums.

The first time he walked out the front door and home to Northamptonshire convinced that his childhood heartbreak, Mary, would be waiting for him. But she wasn’t ’cause she was dead. Some walk. Gypsies showed him a road out of the Epping Forest that proved useful. A shortcut. A secret. Everyone living on the margins. Clare on the edge of his psyche. The gypsies on the edge of society. No wonder they loved each other.

The birds of his childhood singing from a stulp, a seam, a ride.

The second asylum he died in.

I like to think of MacKaye walking for miles in circles around Washington, DC, at night in the early ’80s.

What birds would have been there?
No birds. Just traffic lights.

What sang for him was other bands:

From the trees outside Dischord Records.

From the trees inside Helpston, Clare walked for miles too.

I want so badly for there to be an echo between these two poets. Some sonic recognition. I want them to be lost brothers. Band members. I want them to shout across the different parts of my life like birdsong or wildfire. Stitch it all up. Like Clare and MacKaye, I’m homesick for something that doesn’t exist anymore. The past it is a majic word. We don’t get to stay there.

My son is there. My son is here.
My past is gone.

When my son was born.

I would walk him around at night for miles in a circle in the front room of our apartment. Singing little songs. Trying to help him sleep. His face, any parent will tell you this, was all I ever wanted to know. It blew things apart.

Poems can do that.

I used to walk for miles around Portland, Oregon. A book of poems in one hand. A club stamp on the other.

Also at night.
Back and forth over the river.

My ears shaking out and settling back from a night at the X-Ray Cafe.

The black water through the grates of the Hawthorne Bridge looked so far away. And then it looked close. And then it disappeared.

It can be difficult at times to convince your newborn family to listen to punk rock music first thing in the morning. But you can do it.

Next up, nothing but pure unadulterated screaming joy.

When my son was born.

I would take him down to the kitchen early mornings, still dark out, end of January, to let his mama sleep.

Making coffee in the almost-dark.

Once the coffee was made I would hold him in one arm on the couch and read John Clare poems aloud. Staring up at the ceiling. His eyes would blink open and it was as if a new species of birds or stars were being born in the middle of our living room in central New Jersey.

And oft we urged the barking dog,

For mischief was our glee,

To chase the cat up weed-green walls

I seek no more the finch’s nest

Nor stoop for daisey flowers;

I grow a stranger to myself

In these delightful hours

Soon I’ll put on a record.

Something to wake us up.

Michael Dickman was born and raised in the Pacific Northwest. His most recent book of poems is called Green Migraine.