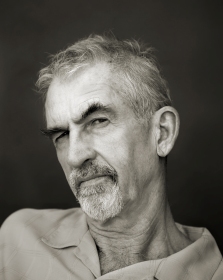 Our favorite surrealist, Jim Krusoe, has a new book coming out this month, titled Parsifal. The novel is about a humble fountain-pen repairman’s journey home to the forest of his birth in the midst of a war between the earth and sky.

Meg Storey: The character Parsifal is named after the title character of an epic poem. How similar are their stories? In which ways do they differ? 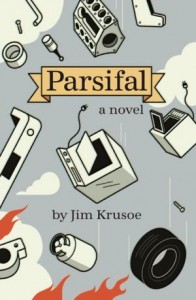 Jim Krusoe: The poem has knights and the grail from the Last Supper. My novel has fountain pens, blind people, sexy librarians, a burning pre-school, double-entry bookkeeping, possible drug use, and court-ordered therapy. Other than that, they are identical.

MS: Your last three novels formed a trilogy about resurrection. How did your work on that theme influence the writing of Parsifal?

JK: I always look no more than one book into the future at a time; it was only when I began the third book of the trilogy that I realized it was connected to the first two. I think I’m about done with resurrection for now, and Parsifal I believe,   stands alone. That is, unless it turns out it doesn’t.

MS: The format of Parsifal consists of many sections within a chapter, with spatial pauses between the sections. How does that format relate to the way Parsifal experiences the world?

JK: I was pleasantly surprised when the story began to reveal itself in short sections, without a traditional time-based narrative, yet was still able to maintain a forward movement. It’s the way that the story came to me, for one thing, and for   another, the sections create a blur between past and present, reality and dream, inner world and outer world. It’s how Parsifal experiences his life, of course, but increasingly, it’s also how I see my own life these days, much to my delight.

MS: Parsifal is described as a “wise fool,” and other than his decision to return to the forest where he grew up, he is a passive character in his own story. Can you talk a little about the challenge of having a main character who doesn’t do much, but rather lets things happen to him? How do you find the motivation that drives the plot?

JK: I don’t see anyone responsible for at least three deaths and burning a pre-school to the ground as passive, though Parsifal may see himself in that light. More  importantly, Parsifal was a child raised in nature; after he’s grown, he enters the city still innocent of the fact that his actions have consequences and his past will carry into the future. In that sense he begins this novel still a child in his belief that he can make good choices and escape failure.

MS: The blind men who live in Parsifal’s neighborhood play a role almost like that of a Greek chorus. Can you talk a little about their purpose in the novel?

JK: A Greek chorus is right! Not only is Parsifal’s relationship with his parents . . .  well . . . Oedipal, but in my version of Sophocles the main character thinks he can see, and the chorus is blind. A phrase from Pound’s Cantos “Where there     is love, there is sight” has stayed with me for years, and for me, one of the central questions of this novel is how much of his own life Parsifal is able to see.

MS: There are many unanswered questions at the end of the book. Do you feel that you know the answers or are they unknown to you as well?

JK: I wish I knew. I just shelved a novel project I’ve had for about five years because I couldn’t find its center. Right now I have a mood that I’m trying to stay with. If I can parlay that into a scene, then maybe I can push that first scene forward into the daylight of a novel, which is how I write. On the other hand, sometimes the most creative choice we can make is just to say no to a project, and to start over again.

Story About the Story: An Interview with Dagoberto Gilb