Why do some writers achieve success in translation, while others are relegated to oblivion? Is it a question of merit or chance?

Consider the case of Yiddish writer Jacob Dinezon, whose book Memories and Scenes only recently, in 2014, became his first work to be translated into English.

Though he’s far less well known today, Dinezon was once one of the best-selling writers in Yiddish, a precursor and mentor to such landmark writers as I. L. Peretz, next to whom he was buried, and Sholem Aleichem, whose stories inspired the musical Fiddler on the Roof. Upon Dinezon’s death in 1919, thousands of mourners swarmed his home and then formed a funeral procession in the streets of Warsaw.

Though I’m a fan of Yiddish writers ranging from Aleichem and Peretz to Isaac Bashevis Singer and Sholem Asch, I’d never heard of Dinezon until Memories and Scenes was picked by my book club, an offshoot of the gay Jewish synagogue to which I belong. Notice the word “belong” rather than “attend” in the previous sentence. Despite my religious upbringing, I’ve largely fallen away from Jewish ritual and rarely attend services except on High Holidays. Going to the synagogue book club is probably the most Jewish thing I do in my current life. 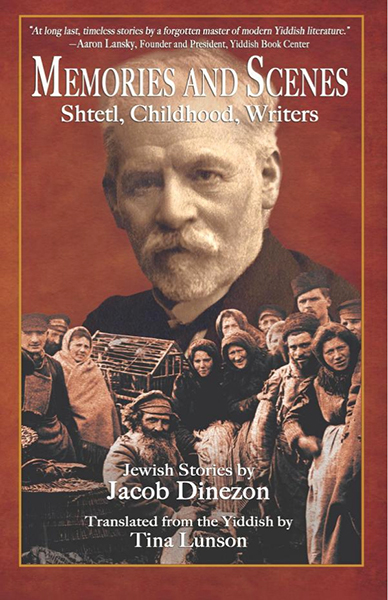 Memories and Scenes serves up a mix of Dinezon’s varied output. It contains autobiographical sketches, an inert jeremiad about Yiddish theater, and several vivid short stories featuring characters who question their faith against the religiously conservative background of small-town shtetl life. These stories resonated with my own struggles to find meaning in the prescribed practices of the religion I grew up with in a predominantly Jewish suburb of Detroit. Also striking to me was the way Dinezon combines the story lines with several recurrences of intense, even passionate, friendships between men, the kind of relationships I craved as a young man grappling with my attraction to other men and what that might mean about my identity.

The opening story, “Memories,” is narrated by a boy trying to suppress his fascination with “Kalmen the Heretic,” a handsome man whom the shtetl folk compare to Satan because he prays in a “German” minyan, or prayer group. Dinezon presents the young man’s confusion about Kalmen’s supposedly sinful nature with a charming wink and a nod, much like Frank O’Connor’s masterfully ironic child narrators:

A friend of mine told me that gehenna, hell, was always open under Kalmen’s feet, and I was afraid to go up to the Torah and stand beside him because I did not want to fall into gehenna. Nonetheless, I liked to look at him and always listened with pleasure as he recited the prayers and sang his melodies, and it grieved me that he had sold his soul to the devil.

Dinezon introduces us to another “heretic” in the hero of the story “Yosl Algebrenik and His Student,” about a brilliant Talmudic scholar whose love of algebra makes him the town laughingstock. Dinezon explains, “The fathers and mothers of the town’s children feared algebra as they did some evil spirit, may heaven protect us. ‘This must be a very difficult subject,’ they said, ‘that can divert the sharpest mind from the correct path.’” 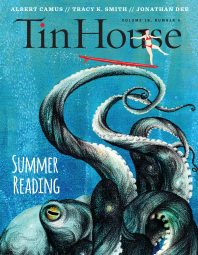 Yosl manages to find a student named Neykhele whom he can (secretly) teach algebra, but when they are found out, Neykhele is cast out of town. Dinezon describes the poignant parting between teacher and student at the train station in a breathtakingly romantic register:

But suddenly Neykhele tore away from the crowd, ran to Yosl, threw himself on him, and began kissing his hands. Yosl stroked the boy’s head and soothed him, the father and mother and friends came running, amazed that the brilliant child clung so tightly to the old, wizened, shabbily dressed Jew. But no one had the heart to separate them. [Neykhele’s father] was embarrassed at that moment that his only son clung to this strange Jew with a love that was greater than anything the father had seen from his own child. The mother quietly spit three times and whispered a protective prayer for her child…

In the book’s most powerful story, named “Borekh” after its protagonist, Dinezon portrays a simpleminded and impoverished man who has endeared himself to the townspeople because of his kind, helpful nature. Though no one knows where he comes from or who his family is, Borekh has become integral to the town’s life, mending the yeshiva students’ clothes, carving wooden toys for children, preparing dinner tables for weddings and bodies for funerals.

Borekh is especially devoted to a clever young yeshiva student named the Brisker, whose eyes “always sparkled with fire. Borekh loved such eyes and could never get his fill of looking at the Brisker.”

Everything changes, however, when Bunim the matchmaker asks Borekh how old he is. The implication is that Bunim thinks it’s time for Borekh to find a mate. Borekh becomes completely unhinged by this question and the prospect of settling down. Ultimately, he decides to evade Bunim’s pressure by leaving the town forever and devoting himself to the art of woodcarving, even though this means abandoning his beloved Brisker.

Dinezon conveys his characters’ religious ambivalence with such skill that these stories’ invariably happy endings, usually involving an epiphany of faith, come off as weirdly disjunctive. The young narrator in “Memories” learns that the handsome Kalmen the Heretic really is a heretic, though one deserving of pity rather than censure. Yosl the Algebrenik realizes there is a higher truth than algebra, namely in the beauty of God’s creation. In a startling shift at the end of his story, Borekh assuages his grief over his separation from his town and beloved Brisker with the comforting thought that he will use the art of his woodcarving to glorify God.

Certainly the literary canon boasts many beautiful works of fiction about the power of faith, like Bernard Malamud’s The Assistant or Graham Greene’s The Power and the Glory. In these books, faith is hard won and comes at a cost. Likewise, Dinezon’s characters, with their probing questions and ache for human connection, don’t want to go quite so quietly into the good night of sainthood either—yet Dinezon continually pushes them toward happy resolution. In Dinezon’s stories, the intensity of his characters’ doubts feels too artificially smoothed over, especially next to the work of his better known and more widely translated Yiddish colleagues. I’m thinking here of the palpable pain of isolation experienced by Stempeniu the musician in Aleichem’s Stempeniu: A Jewish Romance or the anarchic, spiteful energy of the adulterous sinner Elka in Bashevis Singer’s “Gimpel the Fool.”

Is it Dinezon’s treatment of the theme of faith that accounts for his relative obscurity with American audiences? Maybe we’re uncomfortable with this author’s deeply felt commitment to make his stories conform to the faith of his fathers. Ultimately, what resonates most in Dinezon’s work with this skeptical American Jewish “heretic” is the palpable ache of love and doubt that keeps popping up in his stories, his characters’ intensely human longing for what’s not supposed to be good for them. That’s why this book has lingered with me long after I’ve put it down.

And that leaves me to wonder: Is my reaction to Dinezon’s work evidence of his failings as a writer or my failing as a reader—to understand and empathize with a writer of faith?

Aaron Hamburger is the author of Faith for Beginners: A Novel and The View from Stalin’s Head, winner of the Rome Prize for literature.