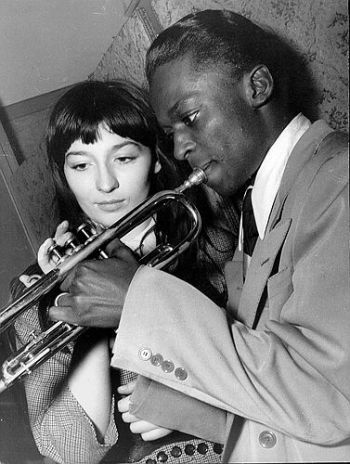 “It’s not about standing still and becoming safe. If anybody wants to keep creating they have to be about change.” —Miles Davis

It’s hard to stand still in Paris. When you’re in love it can be even harder. The first time that Miles Davis came to Paris he was twenty-two years old and it was the first time that he’d left America. It was 1949 and he came to play in a quintet at the Salle Pleyel concert hall on the Right Bank. That night the room was packed and there weren’t any seats left and two women were watching from backstage: Michelle Vian, the wife of Davis’s friend, the fellow trumpeter, writer and translator Boris Vian, and the singer and actress Juliette Gréco. Davis played lots of tunes that night and maybe later on he met up with Gréco and others and somewhere between the music and chatter Davis and Gréco talked and talked maybe so late into the night that it was no longer late but early morning.

“There was such an unusual harmony between the man, the instrument and the sound—it was pretty shattering.” —Juliette Gréco

“The French were in love with Miles and treated him like a god.” —Rolf de Heer

“Do not fear mistakes – there are none.” —Miles Davis

Miles Davis and Juliette Gréco walked through the streets of Paris together and they did not stand still and maybe they walked through Saint-Germain-de-Prés like they owned it and when you’re in love and walking in the dark with a woman with long bangs and a deep voice and black turtleneck and you play like Miles Davis could play and you sing and act like Juliette Gréco could sing and act, it could be easy to let yourself be guided by the dark and the lights reflected on the damp streets and you could hear your feet against the pavestones together with that of your lover and Paris could be nothing less than absolutely beautiful in the jagged late hours and soft night lights and what you are doing is so not safe that it is safe and there are no mistakes to be feared.

“If you understood everything I said, you’d be me.” —Miles Davis

Miles Davis met artists and writers and actors and musicians who were making Paris burn with splendor and purity and imagination and sometimes it was said that their trying to speak the same language was hard because the words were different in French and English and Spanish and Italian but they found a way to communicate through gestures and some shared words and sometimes it can be better to not understand everything that’s being said and rather just be seated together and in each another’s company and to have this friendship and solidarity can be enough.

“[Jean-Paul] Sartre said to Miles, ‘Why don’t you and Juliette get married?’

Miles said, ‘Because I love her too much to make her unhappy.’” —Juliette Gréco

“I caught a glimpse of Miles, in profile: a real Giacometti, with a face of great beauty.” —Juliette Gréco

“Music is an addiction.” —Miles Davis

In late 1957 Davis was back in Paris to record the soundtrack for Louis Malle’s film Ascenseur pour l’échafaud (Lift to the Scaffold). It is said that Davis brought four musicians with him to the studio (Barney Wilen, Pierre Michelot, René Urtreger and Kenny Clarke) and that no one had prepared anything. Davis offered some basic harmonic sequences to the musicians that he’d put together in his hotel room and the plot of the movie was discussed and the band picked up their instruments and on those cold December days of the 4th and 5th they improvised the score while watching the movie.

“Good music is good no matter what kind of music it is.” —Miles Davis

Young Man with a Horn, Musings of Miles, Dig, Blue Haze, ‘Round About Midnight, Milestones, Kind of Blue, Miles Smiles, Get Up With It, The Man with the Horn, Aura and many many more.

“He came to see me at my house a few months before he died . . . I heard his devilish laugh. I asked him what had provoked it. ‘No matter where I was,’ he said, ‘in whatever corner of the world, looking at that back, I’d know it was you.’” —Juliette Gréco

“Man, sometimes it takes you a long time to sound like yourself.” —Miles Davis

Bandleader, composer, and trumpeter, Miles Davis also played the flugelhorn, piano, organ and synthesizer. He passed away on September 28, 1991 at the age of sixty-five.

*Some citations are taken from two articles that appeared in The Guardian: “Sartre asked Miles why we weren’t married. He said he loved me too much to make me unhappy” by Juliette Gréco, interviewed by Philippe Carles and translated by Richard Williams on May 25, 2006 and “Miles Davis: a love affair with Paris” by George Cole, December 10, 2009.