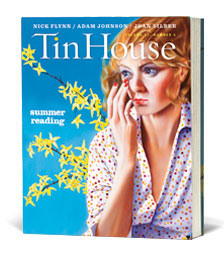 The writer’s job is not simply to make the reader look at the world differently, but experience it in a new way. E.L. Doctorow says, “Good writing is supposed to evoke sensation in the reader—not the fact that it is raining but the feeling of being rained on.” In their stories, Jamie Quatro, Ken Calhoun, and Joan Silber take you inside three wonderfully strange families, bathing us in details that make us feel as if we are with them. That rain isn’t always a gentle summer shower. Sometimes it’s a storm. This is what Adam Johnson does in his artful and disturbing short story, “Dark Meadow.” In the simplest terms, the story is about child pornography. Yet Johnson, who won the 2013 Pulitzer Prize for his novel The Orphan Master’s Son, moves beyond the sensationalism of the conceit and into the deeper realm of empathy and pathos, which is the stuff of true art. I am proud that we are publishing it.

Karl Ove Knausgaard has been called Norway’s Proust for his painfully and precisely observed autobiographical six-volume novel (or memoir), My Struggle. On the occasion of the third volume being translated into English, Scott Esposito talks to Knausgaard about his attempts to come to grips with “the place of death in our world, the complex legacy left by one’s parents, alcohol and addiction, the struggle to be moral, and the place of masculinity in the modern world.”

On the other end of the length and breadth spectrum, poets are the masters of the distilled moment, stopping time to focus all of one’s being on a single phrase or word, life and death captured for an instant, forever changing the reader. Here Nick Flynn stops on the unknowable, Monica McClure the baffling treasures, Meg Freitag the ages of dwelling.

Wherever you are reading this—on the beach, in a field of flowers, on the subway, sneaking it at the office—we hope that you have moments where time stops and art takes over.