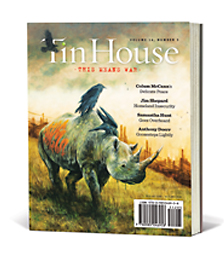 The earliest recorded stories are war stories. Some forty thousand years ago, people painted their tales of hunting buffalo and elk and battling fellow humans on the walls of caves. As soon as we could put pen to paper, we recorded for posterity how armies crossed seas and mountains and deserts to clash swords with other men, for glory and in memory of the fallen. We may have forgotten how our great-great-grandparents met and fell in love, but we remember that our great-great-grandpa fought at the battle of Normandy. Everyone has a war story. Why? Because war equals conflict and conflict equals story. It has always fallen to our storytellers, poets, and reporters to show us who we are and help us make sense of the senseless. So it has been, so it will always be.

In this issue, Anthony Doerr takes readers behind the lines of the Hitler Youth during World War II, while Phil Klay depicts the harrowing chaos of Afghanistan. Will Mackin ruminates on receiving care packages before a big offensive on the Afghan-Pakistan border, and Paris editor Heather Hartley interviews veteran foreign correspondent Janine di Giovanni about her experiences in multiple war zones, from Palestine to Bosnia, Somalia to Kosovo. Colum McCann, in an excerpt from his new novel, Transatlantic, portrays the seemingly unresolvable quagmire of the Irish “Troubles” and how American Senator George Mitchell helped pave the way to peace. But not all wars are fought in the trenches. Jim Shepard, a master at depicting domestic warfare, brilliantly marshals a cast of characters through their dysfunctions in “Wall-to-Wall Counseling.” And Matthew Specktor, meantime, goes behind the façade of glamorous Hollywood as he steps into the bunker with titan agents who are waging all-out war on the studios, and each other.

Sun Tsu, who wrote The Art of War some sixteen hundred years ago, instructed, “There is no instance of a nation benefitting from prolonged warfare.” Let us hope that our leaders listen to our storytellers.

On top of all this incredible content, we’re also thrilled to announce that we’re now able to fulfill digital subscriptions to the magazine. Every new print subscription comes with access to the digital version, which you can enjoy alone for $19.95. This has been a long time coming and we hope you’ll continue to enjoy the magazine in whatever format you prefer.

Crib Notes For Your Book Club