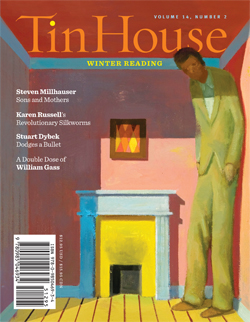 Nat Meade exceeds the Portland or Brooklyn geographical criteria for Tin House magazine cover artists. Because Meade, like us, is bicoastal. Born and raised in Oregon, a mere two blocks from the actual Tin House in Northwest Portland, Meade came East to study at Pratt, in Brooklyn, and set down roots.

The cover image, Local Hero, is part of a series of darkly witty portraits of men posing in absurdly small spaces. The men, their expressions ranging from blank and inscrutable to slight bemusement, gamely arrange their bodies, ducking their heads and bending their knees as ceilings and walls close in around them.

Meade cites the observed, performative quality of Edward Hopper’s paintings as an influence. “Rather than an actual apartment or street in New York, the painting seems like a staged scene,” he says. “The work distances itself from the actual thing; it is like a permanent dream space. The painting itself is a performance and as a viewer I can inhabit it as a shared place.”

We view the larger world of Meade’s men from a stranger’s distance; their faces, when visible, are smudged in shadow. Emotion–melancholy, grief, the weight of unshared burdens—is registered in their postures. Observing a man silent in profile sitting at the foot of an empty sickbed, a blank-faced Joe lying awake on his back in bed, a man hesitating midstep outside a peep show, we feel these moments are freighted with drama. Still, the cheekiness of Meade’s palette combined with a lack of sentimentality, and the feeling that these men are not victims of fate, but possess full agency, creates a sense of possibility. Or what Meade refers to as an “open-endedness that allows the viewers to bring their own memories and associations and complete the experience.”

For a limited time, get the digital edition of Winter Reading for only $5. Coupon code: tinhouse