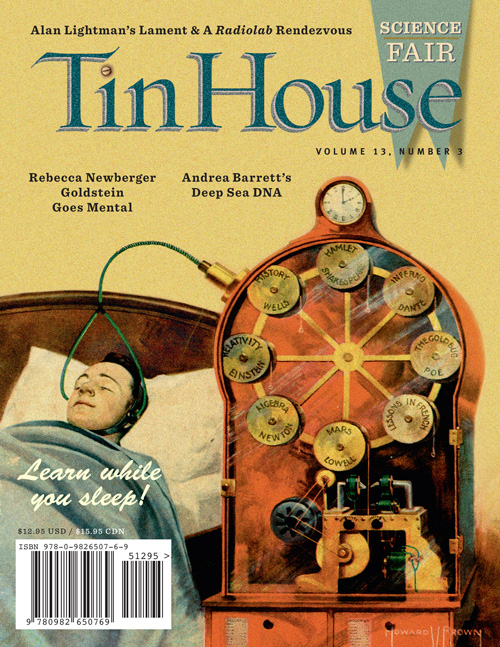 “Imagination is more important than knowledge,” Einstein once said. On the surface, this might seem surprising coming from one of the greatest modern scientists, but Einstein didn’t speak until he was four, and later in life said perhaps he should have been a locksmith. There was a universe forming inside the young Einstein’s head. His desire to open doors, to chart the world, dissect it, understand it, and make order out of chaos, echoes the experience of creation found in writing. 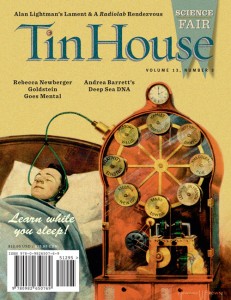 Writers, too, work in solitude, inside their heads, solving problems and stitching together worlds. They calculate the geometry of human relationships, the velocity of a falling expectation, the force of a breaking heart. And yet, despite similarities, scientists and writers often find themselves grappling not only with the world but also with one another.

Given the overlap of literary and scientific worlds, we at Tin House asked ourselves, why are they at odds? And could we, as a literary magazine, do anything to clear the air?

Writers from both camps excitedly took up our challenge and, we think, succeeded in bridging the supposed divide. Andrea Barrett, who has been twining fiction and science for more than twenty years, braids the narrative of one man’s single-minded pursuit of genetic coding during the onset of World War II. Synethesia, the curious condition of overlapping senses that causes people to hear colors, or see tastes, seems like the stuff of fiction, but Rachel Riederer’s investigation proves it is in fact a very real, and very odd, medical condition. Karl Iagnemma, a novelist who also works as a professor of robotics at MIT, emerged from his lab with a whimsical look at how to build a robot that also tells us something about making art. And the poets wrote about everything from nanobots to body doubles.

As with writing and science, the act of reading, at bottom, is about exploration, looking at the world through a new lens, be it a microscope or a point of view, and being open to discovery. So join us. Turn the page and unlock something inside you

The Beige Wall of Fiction Foods

A Few Considerations of Poetic Drama