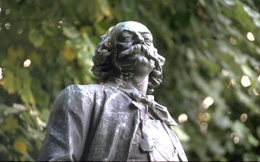 Which writers are you a fan of, I was asked recently. The question was put, in broken English, by an Italian woman who was passionate about books. It was clearly frustrating for her that her limited English prevented her delving deeper into the subject. I thought about her question and mentioned various names, trying hard not to overlook any. But the exercise proved frustrating for me, too. I wanted to praise the observational brilliance of Muriel Spark, the stylistic grace of John Updike, but I couldn’t find the words. We spoke a little about the Italian novelist Leonardo Sciascia, expressing as best we could our admiration for his courage in writing about the mafia. Then we went our separate ways, both feeling inadequate.

That’s one of the problems with literary fandom. You want to explain well why a writer means so much to you, to praise their words, only for your own words to fail you. You’re left feeling you’ve done them a disservice. Then, for literary fans who choose to take up writing themselves, more problems lie ahead. Either you are so intimidated by what others have written that you don’t dare begin or, if you do take those first tentative steps, whether by design or accident, you start to produce pale imitations of the work of your heroes, and so you give up.

I have no lofty ambitions, I don’t dream of literary fame. I simply want to write a story from beginning to end. But in the past, each time I’d start, I’d get no further than the opening lines when those intimidating voices would return. Finally, I came to a realisation: if I wanted to finish my story, I had to stop reading (or re-reading) my most cherished writers. I stopped reading at once.

Shortly after beginning my literary abstinence I found myself in the seaside town of Trouville, Normandy, standing before a statue of another of my heroes, Gustave Flaubert. The statue is life-size, perched on a six-foot plinth, and situated a few feet from the harbour, where fishermen offload crates from their boats, sending some interesting odours towards one of France’s most celebrated authors. Flaubert’s chin is held high, and beneath his big moustache is a smile of satisfaction, as if he’s just finished a large lunch or a particularly troublesome passage of writing. He looks dapper in his suit, and his flowing hair and the lapels of his jacket are captured blowing in the wind. Dazzled by the force of the personality shining out of this lump of stone, I realised that the whole time I’d been standing there, I hadn’t been thinking about his books at all. Instead, I was asking myself whether he’d drunk Calvados, how much money he’d spent on suits, whether he’d played cards. My thoughts were so occupied by the person, I’d entirely forgotten the books. No doubt Flaubert, who saw the writing as everything and the writer as nothing, would have been disgusted.

As I stood there speculating on Flaubert’s life, I began to think of the lives of my other literary heroes. Suddenly an idea struck me, one which might allow me to resume reading their books. Instead of reading their fiction, why not focus on their autobiographies, their letters? I reasoned that, with this type of writing, I’d be too distracted by the details of their lives to get hung up on their writing styles. This would be the perfect compromise, I told myself optimistically. I would not be abandoning my most prized authors entirely, and at the same time I could continue my own writing undisturbed.

I began with two authors I judged sufficiently colourful: Mark Twain and Ernest Hemingway. For the former, I chose volume one of his autobiography, for the latter, volume two of the collected letters. At first my plan seemed to work. I was totally absorbed by Mark Twain the person: his childhood cigar-smoking, his inability to sit through dinner without getting up to pace the room, his dread of legal jargon (he demanded to hold his cat for reassurance while his lawyer explained contracts to him). I was equally fascinated by Hemingway, who not only showed the vigorous side of his character, writing ‘like a demon’, boxing three times a week, but also an unexpected fragility in his letters to loved ones.

Unfortunately it didn’t last, and soon I began to fixate not on the men but the writers. How was it, I wondered, that Twain could describe in such forensic detail a Florentine villa he had stayed in many years before? How was he able to recall so vividly his school friends? How could he move so effortlessly between random subjects—duelling, gold prospecting, spelling, US foreign policy—and with such intelligence and wit? And, just to compound matters, he produced this stuff from his bed, apparently dictating his thoughts as they came to him. Meanwhile, I was becoming increasingly conscious of Hemingway’s craftsmanship. In a letter sent to Archibald and Ada MacLeish in 1924, for example, he apologises with great eloquence for arriving at their home the previous evening in an ‘advanced state of alcoholism’ and then leaving with their corkscrew. He ends with a line of brilliant economy: ‘At any rate here is the cork screw and great remorse.’ If Hemingway can write this after a night of heavy drinking, I thought, and if Twain can produce such material spontaneously, from his bed, then what hope for the rest of us?

So my literary abstinence has resumed. Now my reading material consists of newspaper reports on the stock market, car magazines, books on childcare. I don’t have shares, a car, or children, but the content is too abstract to affect my writing. And I am writing, slowly, but unhindered. But it isn’t easy, and I look forward to the day—perhaps once I’ve reached the end of my story—that I can become a fan again.

Andrew Hamilton was born and educated in Scotland, where he worked for several years as a journalist. He now lives in Paris, where he divides his time between writing and teaching English. His work was recently published in an anthology of travel writing, Whereabouts: Stepping Out of Place.