Sheila Heti’s latest novel, How Should a Person Be? has received a great deal of attention since its U.S. release this summer. Reviews in the New Yorker and the Times, conversations with The Paris Review and The Rumpus, and, of course, countless discussions on literary blogs. In the midst of all this media coverage, a strange pattern emerged. More often than not the attention directed at the novel honed in on the platonic friendship between a writer and painter, both women, with the general conclusion being that that relationship was somehow suspect and untrustworthy due to the characters’ gender. To further complicate matters, the characters are fictionalized versions of real-life Sheila Heti and her friend Margaux Williamson, a Toronto painter. As the book jacket explains, How Should a Person Be? is “a novel from life.”

The hostile reception to How Should A Person Be?, which echoed the criticism Lena Dunham’s HBO hit show Girls received, created visceral reactions among various literary types. In August, Salon ran Elisa Albert’s rant, “My Girl Problems“,  which partly reflects on Albert’s Letter in the Mail to The Rumpus wherein she goes so far as to call Heti a bitch. Later that month, Jezebel published Roxane Gay’s response to the media frenzy in an article called “How to Be Friends with Another Woman.”

I recently had the opportunity of meeting with Sheila Heti in Toronto, where we discussed the novel, as well as other arguably more interesting topics of discussion besides whether or not female friendships are inherently untenable, or if she is, in fact, a bitch.

Marie-Hélène Westgate: I’ve been reading a lot of essays about How Should a Person Be? and I’ve found that so many of these essays are uncomfortable with the friendship between Sheila and Margaux, but also completely enthralled by it.

Sheila Heti: I don’t really understand why. To me, it’s just a really straightforward picture of something very ordinary: a friendship. And so I can’t quite see what they’re seeing. I don’t know why it would become an issue. I don’t dislike all the writing about this: it’s obviously good for the book to generate conversation, but I just don’t know why… Do you know? 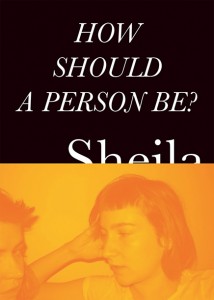 MW: Why people are so…

SH: I don’t understand what’s controversial about the friendship, or the depiction of the friendship. It’s like I have a blind spot. There’s something I just can’t see.

MW: In a rant for Salon, Elisa Albert wrote, “Sheila (or “Sheila”) is obsessed with the brilliant Margeaux [sic], a vibrant and honest painter.” Albert summarizes the friendship between Sheila and Margaux by saying, for example, that Sheila and Margaux are “women who fall in love with each other’s minds.”

SH: That’s probably largely true. It’s also about women who fall in love with what the other person could possibly teach them. I think that’s true of much of what Margaux sees in Sheila, and much of what Sheila sees in Margaux: qualities that are foreign to their own nature. So it’s not just the mind; it’s each other’s natures.

SH: Yeah, she says, Sheila Heti is a bitch.

SH: I think all relationships have the possibility of breaking – even relationships between parents and children. The fact that relationships break apart, or change over the years, isn’t specific to female friendships. And so to focus on the specific fact of women – to say that women’s relationships are specifically and particularly volatile – is dishonest, I think. And there must be something behind that. Its effect is to make women suspicious of other women. But for instance, I’m not still seeing any of my old boyfriends.

MW: I guess those relationships broke.

SH: They became untenable. Yet I’m still friends with Margaux. I think friendships can actually be quite stable over the years. In friendships, you can go away and solve things. You don’t have to be around the other person constantly; that can put a lot of strain on a relationship. When you’re angry with a friend, you can each go to your own houses and get over it. I remember, after this terrible fight with my best friend when I was five years old, how we each went to our separate houses. We were just going to stay apart: I was never going to see her again. And of course I saw her the next day, and everything was fine. I was so confused. I remember that moment really vividly: I was so convinced I would never, ever speak to her again. It was my first experience of reconciliation in my life.

MW: It’s probably the groundwork for this book.

SH: [Laughs] Yeah! It’s always amazing when you’re having a bad time in a relationship and you think, well, things are really going to go downhill from here – forever. And then a week later you’re in a completely different state, and you don’t have any of those feelings. I think it’s neat the way relationships can regenerate themselves. I don’t know what that engine of regeneration is. I guess it’s love, right? Like, there’s something deeper than all those things that cause you to hate the other person, or to resent the other person. I wonder if love is the part of you that makes you forget your wounds, your woundedness? Without love, you can mistakenly feel that by forgiving someone you’re sacrificing something essential to yourself and you’re giving in.

MW: Elisa Albert seems to have mixed feelings about Sheila’s character. At times she respects Sheila, even admires her, but she also describe Sheila as “the mildly irritating chick you can’t quite trust, the gently exploitative one who suddenly copies everything you do. She’s not very open, or warm, but somewhere in her heart and in her prose, there’s a delectable and lovely bit of yearning.” That’s when she starts calling Sheila a bitch. Is this an apt description of Sheila?

SH: I don’t think so. I mean, that’s not how I see the character. The girl Elisa Albert is talking about is the one who suddenly copies your hairstyle and flirts with your boyfriend. That’s a completely different scenario than Sheila’s total lostness, and her need to use other people as examples of how to be in life, and admiring everybody. I think the dress incident is the only example in the whole book where something like that happens. And I think Sheila genuinely liked the same dress as Margaux. I don’t think she was trying to copy Margaux. Of course, there is that problem later in the book where Sheila feels like she’s not doing the work; that instead of using her own words, she’s used Margaux’s words. But that comes out of a fear Sheila has of going deeper into herself. 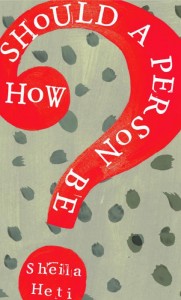 MW: It’s her own hang-up, isn’t it? Sheila isn’t necessarily intent on stealing from someone else so much as she just seems to be operating out of her own paranoia.

SH: Sheila’s a bit tricky. But there’s hardship inherent in any deep friendship, isn’t there? And if you don’t have the hardship and the love, then where’s the story?

MW: Midway through her rant, Albert writes, “How Should a Person Be? is smart as hell, and funny, and honest, and important. Important like: here’s a woman, a pathologically, chillingly self-aware, twenty-first century female person who is not in hiding, and I bow to that.”

SH: Yes. She should bow to me. I highly approve of that quote [Laughs].

MW: While we’re on the topic of hating on female persons, you said in a Paris Review interview that you’d been thinking a lot about Paris Hilton, and Lindsay Lohan, and the girls from The Hills, and wondering what you and any of these girls may or may not have in common.

SH: I felt empathy for them. Their situation is a tough one. I’m not, and never have been, in their shoes, but it’s possible to imagine being the recipient of that much hatred and contempt. I was thinking about how, for these girls, any moral sense or intellectual possibilities are scoffed at. But nobody can be that one-dimensional. They can’t actually be the way people think of them. I wanted to ally myself with them, and then ally the Sheila character with them, too, because it seemed like the right thing to do – to win those girls some depth, and to sort of show what their depth might look like.

The Sheila character has more in common with those girls than with myself. I wanted the Sheila character to be in the same realm as Paris Hilton and Lindsay Lohan and the girls from The Hills, and for all of them to have depths that we could see. I felt like filling in their brains and their hearts. All we ever see are these humiliating images of them, and these really harsh, out-of-proportion depictions of their behaviour, like they’re witches. And like, why does anyone care? They’re being made an example of – well, for whom? And so they won’t do what? So I felt like I had to rescue them.

MW: That’s very noble. You also said you were wondering what it is that all those girls were actually in pursuit of. You said you didn’t think they were looking for fame.

SH: What do those girls want? Perhaps a place in the world.

MW: Did you have an outline or any sort of structure when you started the novel?

SH: I began looking for a structure a few years in. At a certain point I realized I needed that. I was trying really hard in all sorts of ways to figure out what the structure could be, and what the story could be. I can’t remember when I had this feeling that there had to be a moment where Sheila betrays Margaux, but I also knew that had to happen, and it was a matter of figuring out what that would be, and figuring out how to dramatize that without making it too dramatic. And I don’t know if I pulled it off or not, but I really was trying to make it dramatic but not more dramatic than life.

MW: You’ve been asked how much of the story is fiction, and I wanted to know how much thought you give to the overlap between fiction and nonfiction. Is that something you care about when you’re writing?

SH: I think with this book I didn’t think about it at all. I would rather not have called it a novel from life, and if the cover copy had not said, real emails and transcriptions! I don’t think it’s really interesting for me to parse it. I think it’s more interesting the less you know.

MW: A fictionalized memoir, I think, is how it was described to me.

SH: And I wasn’t thinking about it as any kind of memoir.

MW: Is your writing often framed in a feminist context? Do people try to say that your writing is, or isn’t, feminist?

SH: Well they have with this book, which is fine. Feminist is a good word. It should be used more. It’s a useful word. There’s no other word for it. I like it.

Marie-Hélène Westgate is the senior editor at Freerange Nonfiction. She earned her Masters of Fine Arts in Creative Writing from Sarah Lawrence College, and is currently at work on a novel. Her work has appeared in The Rumpus, Lumina, One Cool Word, and Freerange. Marie-Hélène lives with her partner in Brooklyn, where she spends as much time as possible locked alone in a room.