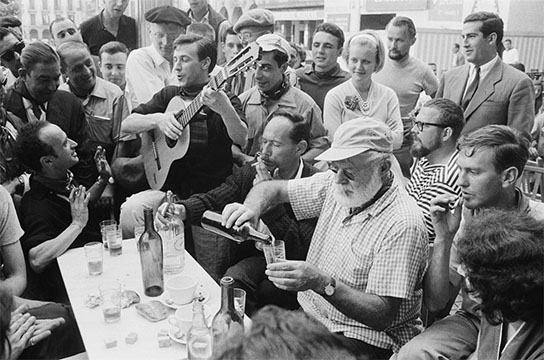 We could have stood there for days on the shore waiting for one of us to speak: the fisherwoman full of purpose with sharp, dark eyes fixed on the top of her fishing pole, flashing silver in the sun, and just beyond the jewel-green sea, waiting for the tug of the pole whose sudden bend and tautness would absorb all of her attention, and, pulling back on the rod, out would come, slick as a cut of a knife through the air, different types of sea bream with flecks of red or white and grey mullet whose names in Italian sounded like little pools of sea water—occhiata, cefalo, sarago—fish no bigger than the size of her hand—that she unhooked with an expertise that was economic in its movements and expansive in its knowledge and placed in her sky blue bucket.

From where the fisherwoman stood, the Mediterranean Sea swoops out from the bay, with soft slopes of pine trees in the distance on low hills. It was early September and my boyfriend and I were in a little beach town about an hour south of Napoli. It was really hot, the kind of heat that at first feels like the hottest day of the summer (in southern Italy that means mid-August with its feverish flood of humidity) but that in those early September days, had cold behind it, a sudden chill on the heels of the heat, of fall and of the coming winter: it was right there.

I’d never spoke to the fisherwoman, not because I didn’t want to, but because it would have been in Italian and my language skills were pretty unreliable—I knew some greetings and could stitch together some simple, hodgepodge phrases, nothing that would last too long in a conversation. The fisherwoman left a few days after we’d arrived and on the last morning that she was there, you could count twenty, maybe twenty-five people on the little stretch of beach, with a few children out swimming in the calm sea, ellipsis points in between waves. 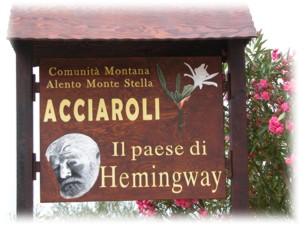 I sat at what I hoped was a respectful distance from her on a big beach blanket in my oversized, crooked straw hat, trying not to look over too much in her direction. A couple times I pawed through a pile of books I’d stuffed in my beach bag, too hard to resist earlier that morning, but in the wake of the spectacle of the fisherwoman and her abundance of fish, the pressing intensity to read something right now faded and the morning burned more and more towards the high heat of midday, her sky blue bucket gone dark with fish by noontime.

She never once looked over at me. Why would she? I had nothing to offer her besides some high-protection sunscreen, a leaky pen and my yellow, ancient flip flops with decorative Italian flags sewn on them, that, with their fossilized aspect, could have walked straight out of the 1861 Unification of Italy, not stopping until they arrived at the foot of my beach towel.

Sometimes you really want to believe that something will protect you and you buy it/drive it/drink it in the hope that, even though it could be a long shot or illogical or impossible, this item/vehicle/beverage could save you in some way. The sunscreen was like that for me: SPF will save the day. This crooked straw hat: shelter. Even the flip flops: shield from hot sand. Protection has to come from somewhere; you can’t do it all alone all the time. The sunscreen bottle said: Apply liberally. Renew.

A couple days before the fisherwoman left, we’d gone to the little fishing town of Acciaroli for pizza one evening. The drive was over some hills, thick with pine trees, and our headlights cut through the deep dark, marking time. When you drive into town, there’s a sign, Benevenuti ad Acciaroli, paese di Hemingway, Welcome to Acciaroli, Hemingway country. We walked through tiny streets of low, stone buildings, people sitting out, their chairs propped against the walls, faces lit from streetlights that gave everything a night-warmth of sunglow. We ended up in a piazza tucked back a few streets from the port, at a pizzeria with outdoor tables underneath a big tree with overhanging branches, its slick, shiny leaves shaped like stylized tears that held the heat in.

I’d read somewhere that maybe Hemingway had come to Acciaroli to watch the fishermen and talk to them and take notes on all of it for The Old Man and the Sea, but I didn’t think too much about it. There is a lot of Hemingway country: Paris, Key West, Cuba. Maybe here too. He traveled a lot. And then “maybe” is a large country. There are signs all over the world that mark someone’s birth, death or presence: this person was born here, another person lived here, someone wrote this in that house/on this wall/on this desktop. You stake your claim. In The Old Man and the Sea, Santiago says, “Fish . . . I love you and respect you very much. But I will kill you dead before this day ends.”

The choice of pizzas that night was hard: there were two pages of pizzas on the menu, red or white, and in the end we chose one of each: margherita with thick slices of mozzarella di bufala with a few large basil leaves baked on top, and salsiccia and broccoli rabe, the mix of salty sausage and the broccoli with its slight bitter taste made the thin golden disks of dough just the tiniest bit sweet. We drank cold beers from bottles that turned the paper placemats wet. 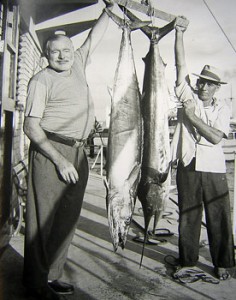 Later, we walked through the port past fishing boats—dark blue trim, piles of ropes, ragged flags. One boat had a sign in black marker taped on cardboard to a column: Vendesi Per Colpa della Comunità Europea, For Sale Due to the European Community’s Fault. There were some yachts too, tipping sharp noses into the port. At the end of one of the piers was a life-sized statue of the Madonna. She was looking out and down at the same time, arms at her side, hands stretched out to the sea, dark of dark—Salerno out there, Sardegna out there, sailors somewhere.

Someone had told us that maybe Hemingway had stayed at the Hotel La Scogliera on the second floor, and that from the rooms there, you could see the sea. We walked there, right by the port. The entrance was locked, it was dark, and only one window at the top of the building was lit, florescent blue spilling out. It had been maybe a decade since La Scogliera had closed, maybe more, maybe less. Near there was a fountain, tiled and glittering, and an old man was sitting there, arms stretched out, white shirt, leather sandals. There was no one else around. I asked as best I could in Italian if he knew anything about Hemingway, the stories. He didn’t say anything but his shoulders and face said, “Dunno.” Here was an old man; there was the sea. Maybe Hemingway was here, maybe not.

Written in 1951, The Old Man and the Sea was published the following year in 1952, received the Pulitzer Prize in 1953, and was specifically mentioned when Hemingway received the Nobel Prize for Literature in 1954. I read it a few years ago and was hoping to get a copy that night in Acciaroli. We stopped by the bookstore in town, open late at the end of the season. I asked for a copy. She didn’t have any in English. It didn’t matter; it seemed important to have the book in hand and anyway I could puzzle out a few words and phrases in Italian. There wasn’t any hurry. It would be good to learn that way. She said sorry, there were no copies left. They had sold out earlier in the summer. “Quante?” I asked. “How many?” About one hundred copies, she said.

The name of the bookstore was La Leggenda and it means the same things in Italian as it does in English: some kind of celebrity, a myth or fable, an inscription or diagram on a map. Sometimes a legend can help you understand something better; sometimes it confuses things. In The Old Man and the Sea, Santiago says, “Fish . . . I’ll stay with you until I am dead.” Maybe legends do too.