At first the ladybugs were pests. I crushed them between squares of toilet paper. I clung to their mummied bodies with uneasy fingers. I learned to dread their metallic smell, and the eerie weightlessness of their shells. I joked that my apartment was the land of single ladies, and planned to dress as one for Halloween, because ladybugs were all I could see.

Then they became my roommates. But they were roommates I’d found on Craigslist, strangers with whom I happened to share a kitchen and a shower. I began to notice the kinds of things you notice only about people and bugs that you live with. The way they lingered on bathroom tiles and stray receipts, drawn to the color white. How rarely they interacted with one another, and how, if they did, they huddled in corners or paused mid-wander, butt-to-butt, at ninety degrees. The way one black wing looks when it licks out from under the shell, so thin at the filigreed tip it is gray. I decided the darker, more densely spotted ones were the wives. 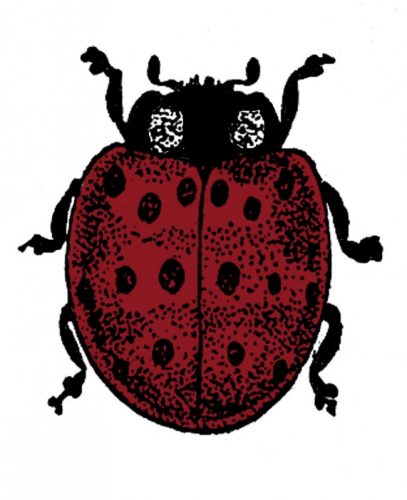 I became adept at handling their carcasses: I was a ladybird cemetery attendant, the caretaker of a graveyard that happened also to be my home. I learned to use the flat, ridged side of the body as a grip, since putting too much pressure on the glossy shell would cause the insect to slip. I learned to regulate my body’s reaction to the hint of slip before the full slip, which if I didn’t steel myself would make me think the bug had reanimated, alive.

Now I greet them when I come home—“Hey, guys!”—in the same voice I use to greet chin hairs before I pluck them, each wiry time they arise. It was easier than I thought it would be to transpose the letters of pest, to begin to think of the ladies as my pets. I didn’t know what they ate (yet). I didn’t know how they reproduced, or how long they’d been alive (two years, maybe three) when I lay them on the surface of my toilet’s water and counted them before flushing them away. I didn’t know if the black spots on my ceiling were their feces, my mold, or their eggs. But my vacuum cleaner exhaled the musk of their bodies every time I turned it on. “How did an apple seed get in here?” was my benign thought when finally one showed up in my mouth. “Tickles”—when, driving on the highway, I realized a harlequin ladybird was roaming inside the warm toe of my sock. “How sweet!” the time I watched one use its snout to steer a friend’s corpse round my sink. And if you tell me that ladybugs eat other, peskier bugs, I will react with smug satisfaction: of course they do, those old maids, my little skunks. They dot my floor like pimples, and pimples can be sexy.

Helen Betya Rubinstein‘s essays have recently appeared in Parcel, STORY, Okey-Panky, The Millions, and The Chronicle of Higher Education. She lives in Mount Vernon, Iowa.