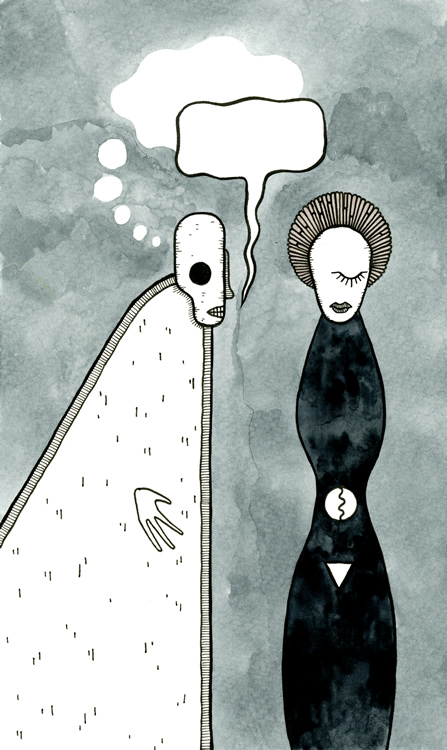 I have lost some books in the re-reading. Stories which fell far short or disappointed me bitterly in some totally unexpected way once revisited. Heart of Darkness, like Moby-Dick and a handful of others, is one of those rare books that seems to pull me into it more deeply upon each re-reading. The brief and painful moment quoted above is one of those barbed hooks in the tale, something that simply won’t let me go and painfully forces me farther and farther in.

I am still asking myself why. Why does Marlow lie to Kurtz’s fiancée? Marlow himself admits at the very start of his tale that he hates untruths. I would argue that the entire thrust of the novel has been a search for truth, regardless of how ugly or horrifying it might be. Marlow, like Kurtz, has paid bitterly for some understanding of truth, and yet at this final moment, when perhaps he can unshoulder some of the burden and lay aside some of the weight of his wounds, he retreats. He lies. He spares Kurtz’s fiancée by allowing her to continue to live in that world of women, a world described to Marlow: “It’s queer how out of touch with truth women are. They live in a world of their own, and there has never been anything like it, and never can be. It is too beautiful altogether, and if they were to set it up it would go to pieces before the first sunset. Some confounded fact we men have been living contentedly with ever since the day of creation would start up and knock the whole thing over.”

But I don’t believe, I can’t believe, that Marlow’s choice was the result of some insipid chauvinism. There is a deeper cause, and I believe this may be where we hear Conrad’s voice as clearly and loudly as when he writes, “We live as we dream – alone.” To Conrad, the nature of our existence is that none of our experiences our mutual. Each of us lives wrapped in an illusion of our own making, often unaware not only of the realities of this world but the realities of those that co-exist in the world with us. We are forever separated from each other by the structure of our own experiences and the choices we unconsciously make to remained walled off from one another. To breach these walls and to ease, even briefly, this aching loneliness is, to Conrad, an impossibility. It doesn’t matter much at all what Marlow tells Kurtz’s fiancée, she will continue to live in a world of her own choosing, believing what she wants whether there is any connection with the truth or not.

Our Endless Numbered Days: An Excerpt