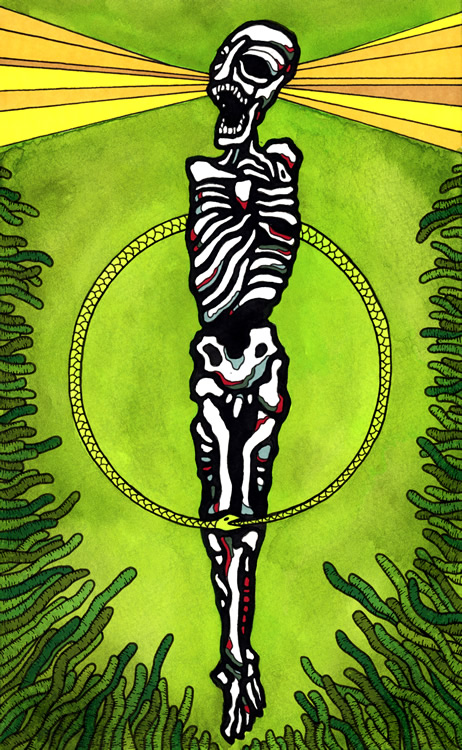 Kurtz is so very much more than a character, or a “remarkable man,” although he is also both of those things. Kurtz is a martyr, a saint, and an idea, and ideas live on long after those who created them have passed. Near the conclusion of Heart of Darkness Marlow explains that Kurtz is remarkable because, “He had something to say. He said it.” Marlow, like this readers, seems humbled by and in awe of Kurtz’s assessment, his judgment of the world. Kurtz had a vision that although it “could not see the flame of the candle” it is “wide enough to embrace the whole universe, piercing enough to penetrate all the hearts that beat in the darkness.” Kurtz had, “summed up – he had judged. ‘The horror!’”

Kurtz’s final words, earned at the end of lifetime steeped in almost divine omnipotence, freed from any sort of externally imposed morality or accountability and absent of any kind of internal moral code, are to judge all of existence a horror. This “vibrating note of revolt” elevates Kurtz. He is no longer a villain, and never was a hero. He is now positively Satanic in his rebellion against the niceties and the lies that we cloak ourselves in to keep the darkness and the horror at bay, to fool ourselves into believing our cities and our electricity and our social media have civilized us and pushed us beyond the simple fact that power, the nature of power and the use of power, is all that truly matters. Those who have power will use it and take what they want, gleefully, greedily, with no regard for any rules other than the rules of power. Those who are powerless will suffer, often terribly and unimaginably, and die choked with impotent rage and wracked with agony. Kurtz saw this. I don’t know if I will ever be certain if he embraced it. But I know he accepted it.

This idea that is Kurtz had a terrifying magnetism. Marlow says that he had drawn near to the brink, peeped over the edge, and withdrew. Pulled back. In a sense, rejected, out of fear and cowardice, the idea of Kurtz. Yet still Kurtz holds him in thrall because Kurtz, “had made that last stride, he had stepped over the edge…” And of Kurtz’s pronouncement of horror, Marlow declares it, “an affirmation, a moral victory paid for by innumerable defeats, by abominable terrors, by abominable satisfactions. But it was a victory!”

After this, after reading Kurtz’s words over and over throughout my own life, after spending nearly all of last year living with Kurtz inside me, whispering to me, I could not see him, as an illustrator must see the work they set their hand to, as anything other than a saint. An icon. The wasted, gaunt, skeletal creature, devoured from within and without by disease and defeat and by hatred and wisdom, cursed with the terrible burden of clarity, became a pillar of sickly light shining in our own darkness. I will never forget this image of Kurtz. It will never leave me. Even though I wish it would. I too wish I could have looked over the edge and pulled back.