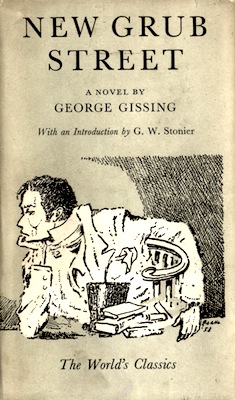 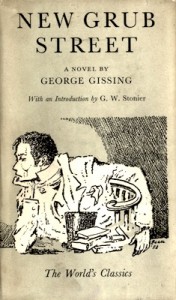 I was glad to see another reader’s enthusiasm for George Gissing’s New Grub Street in Pamela Erens’ “Lost and Found” column in the current issue of Tin House (#56).  The 1891 novel is about career authors in Victorian London, and the title and subject matter hold significance in my life.  My immediate reaction to the novel when I read it years ago was a strange mix of depression and awe.  I thought, If the writing life is so miserable, we might as well do it in good company.

I started a community writing center in Boston in 1997 to create a space to find this good company, and decided to name the community “Grub Street” both to honor Gissing’s novel and because of Grub Street itself, which existed on the margins of London’s literary life.  Grub Street of London was home to many impoverished poets and B-list literary ventures, and as Gissing’s novel shows, contained a mix of dreamers and ambitious career-oriented writers.  The name of our community pays homage to that time and place, but also is an ironic reference to the type of hack writing that came out of the original Grub Street, writing thrown together without much artistic merit.

I started Grub Street out in the community, away from academia, and all were welcome.  This was a very fringe idea in 1997.

It’s striking me to how relevant Gissing’s book still is to the writing life.  The relationship between art and the marketplace remains challenging and fraught for writers who want to remain true to their art but who also want and need to make a decent living.

Erens wonders if this is harder now or easier.  I would argue it’s as good as it’s ever been for writers.

Technology and the breaking down of traditional publishing structures has ensured that the game is no longer rigged.  Anyone can play.  Open channels make it possible for anyone who has the desire to write and find an audience to give it a go.   While this has made the publishing field more competitive than ever, it’s also more democratic than ever. Independent writers and editors can work together creatively on a nearly level playing field with big corporate players who, as Erens points out, are often also worrying about toasters and theme parks.

Moreover, writers no longer need institutional acceptance or support to launch themselves or to find their readers.   The NEA may not be interested, but an eager crowd of readers on Kickstarter might well be.  While some big names such as Seth Godin have used Kickstarter to great success, most publishing projects on Kickstarter are small, idiosyncratic, and represent the deepest passions of the creator.  The projects would be nonstarters for most traditional publishers.

It’s also true, as Erens writes, that MFA jobs are scarce and transient for most, but there are many new ways to make a living these days which feed the creative life and afford flexible schedules suitable for writing: teaching online or coaching, creating blogs, or doing freelance work outside of the creative writing sphere.

Still, none of this is easy.  It’s hard work and it requires initiative, entrepreneurialism, marketing savvy, people and business skills, and luck.  This new landscape definitely favors the survivalist Milvains over the dreaming Reardon’s among us. In that way things haven’t changed.

But, as Erens writes, “Gissing saw that men collude in their own failures and that the world needs hustlers and finaglers as well as oversensitive dreamers.”   Successful literary careers demand a knowledgeable and passionate approach to both the craft and the business of writing.  This was as true in Gissing’s time as it is in ours, and it will always be the case.  The Reardons and Milvains of this world need each other, and the best writing communities work to bring them together.

Eve Bridburg is the founder and executive director of Grub Street, an independent center for creative writing located in Boston.