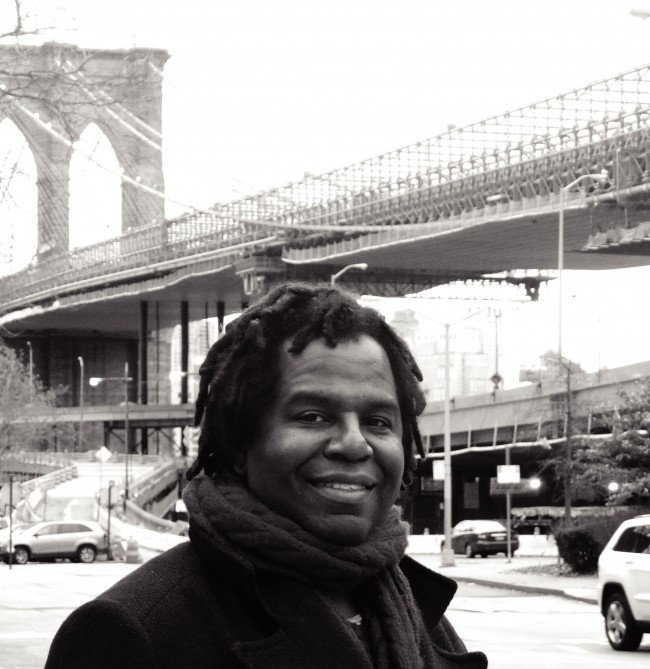 In his acclaimed debut novel God Loves Haiti, Dimitry Elias Léger stitches together history, sociology, religion, politics and a love triangle—all in the shadow of the 2010 earthquake in Haiti. The story revolves around the spirited artist Natasha Roberts, her husband the President, and the love of her life, Alain Destiné, a youthful savvy businessman who is determined to stay in Haiti. The book follows them before and after the devastating earthquake of January 12, 2010.

Lyrical and with a great sense of humor, in God Loves Haiti, Léger has created compassionate characters who navigate a natural disaster with fortitude, sensitivity and wit.

Heather Hartley: What was the impetus for you to turn from journalism and nonfiction to writing a novel?

Dimitry Elias Léger: Legacy and money. I began thinking seriously about writing books the minute after my first child was born early in 2002. I wanted to leave him a tangible family heirloom, a cool paternal accomplishment to brag, something I wish I had when I was making my way into the world. It had to be my particular perspective on Haiti in book form, because such a novel could influence him in multiple ways. I knew that growing up in other countries he would learn about Haiti through depressing headlines. It would be impossible for him to know the delightful Haiti I knew and still know. I’d known I’d write books about the charms amid the tragedies of Haiti someday since I was 10. His birth gave me urgency. I had to stop putting it off. Finding the right voice for my stories about Haiti would take me most of the subsequent 10 years. I have two kids now. They both will learn about this country, one third of their patriotic identities, though my novel; they will also learn about me, my values, my sense of what is noble, humorous, and craven. Since they were old enough to see the odd hours I had to work to write the book, the stubbornness and persistence it took to ignore publishers’ rejections for many years until the right one came along, and the joy of successful publication and a popular book tour, the book will also forever serve as a message for them to follow their creative dreams and make the most of their talents in whatever fields they may have an aptitude for. 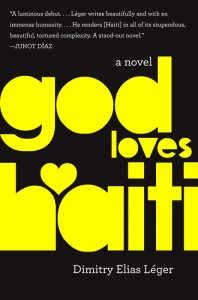 Money became a factor that added urgency to my turn to fiction. I left journalism in 2004 for grad school and a career in international relations abroad. I did it because I wanted to move to Europe and become a humanitarian, and also because I thought no longer doing high end and high-pressure journalism would mentally free me to turn to fiction as a serious hobby. I didn’t see the magazine industry crashing like it did, but it did.  Once the Great Recession of ’08 stalled economic growth in Western Europe, where I’ve lived since ’05, and the job market here tightened considerably, leaving little room for non-natives and certainly non-Europeans, I had to look to generate income in a line of work other than writing reports and managing media relations for United Nations agencies in countries far from where my children were growing up. Taking a shot at literary fiction novels seemed as reasonable an option as seeking an advocacy job for a global NGO and corporation. My wife and I knew selling a first novel faced incredibly long odds. Yet I sold and published my first novel before finding a job. Go figure.

HH: What was it like to transform your writing from nonfiction to fiction?

DEL: It was an education. I had to unlearn most of the skills that made me a good nonfiction writer. I had to hunt for the qualities that made me love the novels I loved. Basically I had to find my voice as a musical novelist, and I had to develop a literary sense of humor, as the essential difference between nonfiction and great fiction is that the novelist has the right to be funny and profound while raising more questions than delivering answers. The transformation pretty much took a decade.

HH: The characters in God Loves Haiti come through vividly as they navigate as best they can inner conflict and outer chaos. Was it difficult to not have the earthquake overwhelm the story, and by extension, the individual stories of the characters Natasha, the President and Alain?

DEL: Nah, the disaster was no threat to overwhelm the story. I love war novels, and just about any novel about Haiti is a war novel. In fact the idea that risked overwhelming the novel was the word “Haiti.” It’s a disturbing word to many inside and outside the country. So the novel, as it features a president of Haiti, took on the word’s talismanic power head-on. I thought the questions of faith, the “God” part of the novel’s title, would provoke debate. Even I underestimated how much the brand Haiti can overwhelm conversations.

HH: You were an adviser to the United Nations disaster recovery operations in Haiti after the earthquake. How did this experience filter into God Loves Haiti?  Was it hard to balance in your novel?

DEL: My personal experiences were easy to keep out of the novel. The story of the sensitive writer who is overwhelmed by the sight of human suffering on a national scale is a cliché I didn’t want to add to. My experience with the UN did allow me intimate access to the upper-reaches of the Haitian government and the power dynamics with the international community. I was a public affairs officer. My job was to constantly visit and assess how well the UN’s programs were doing and report back to UN brass, colleagues, and the press. Phil Klay, the author of Redeployment, the 2014 National Book Award-winning collection of war stories, had the same job for the US military in Afghanistan and Iraq at the height of those . . . interventions. Our fiction is similarly harrowing, except for the difference that I tell the story mostly from the emotional perspective of locals, and he writes from the perspective of the Americans.

HH: The structure of God Loves Haiti follows the characters as they experience the earthquake at different points and it’s so tied to their stories. How did you go about creating this structure?

DEL: I simply wanted to write about the emotional turmoil of experiencing an earthquake. It’s unlike any other natural disaster. I wanted readers from every walk of life to have their hearts spin as the millions of people who experience earthquakes have.

HH: Stitched into the story of God Loves Haiti are expressions in French, and excerpts from Dante, and the novel begins with Derek Walcott’s stunning poem, “A City’s Death by Fire.” How does poetry influence your work? Is there something that you find in poetry that is expressed more readily or differently than in prose?

DEL: My novel tries to build on the long tradition of writers who wrote about peoples of faith dealing with overwhelming personal circumstances. That meant Junot Díaz and Edwidge Danticat and José Saramago, but it also ended up meaning lots of poets like Dante, Walcott, and Michael Ondaatje. Poetry, and the humor in much of the great Latin novels, were the fuel for my voice. You are what you read, but you really are what your writing talent says you are. Dry, economical prose was a gene my writing wasn’t born with, even though I love Hemingway and Camus to death.

HH: There’s a great sense of wit in God Loves Haiti. Does humor come naturally to you? 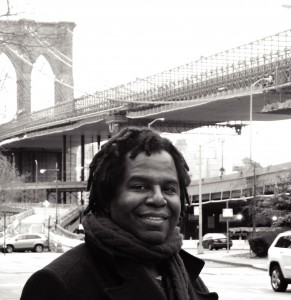 DEL: Thanks, and, um, yes. When I told an old friend that looking for the funny in each situation was making writing a novel more fun than I expected, he said, wait, but you’re not funny. I laughed! He probably was right. But humor came to me naturally while writing fiction. It entertained me and made me want to entertain readers. Humor proved the great difference between fiction and nonfiction writing to me. I do believe a novel has to entertain, no matter the subject matter.

HH: How do you balance the reality and the myth of Haiti in your writing?

DEL: Like I balance being me, the man/father/husband, and being a writer/artist: I don’t. What’s reality to a writer aka mythmaker anyway? What’s the difference who we are in private and who we are when we make eye contact with another human being who we instinctively want to like us? My guess is, the reality and myth of Haiti is my favorite subject, it’s my DNA. Balancing it is not a worry. Balance is the enemy of entertaining art and literature.

HH: What are the ingredients of a good story for you?

Dimitry Elias Léger was born in Port-au-Prince, Haiti. Educated at St. John’s University and the Harvard Kennedy School of Government, he is a former staff writer at the Miami Herald, Fortune magazine, and the Source magazine, and also a contributor to the New York Times, Newsweek, and The Face magazine in the UK. In 2010 he worked as an adviser to the United Nations’ disaster recovery operations in Haiti after the earthquake. He lives with his family in France and the United States.

A Museum of One’s Own: The American Writers Museum

Difficult Happiness: A Conversation between Jerry Stahl and Lydia Lunch