When it begins, you are water, flowing, like the men flowed into every space. As the rush of the ocean drowns out all other sounds in your ears, the tide starts to recede faster and faster, spinning everyone out into a whirlpool of men and schoolgirls, ebbing away in the scorching heat of the flames. There are enough tears to collect and douse those burning classrooms, those dormitories, if only you weren’t yourselves evaporating, choking on the ash of physics and literature and mathematics as you turn to air.

Moving toward Sambisa forest, some of you become springs. You jump from the truck bed, arms angel-wide without the grace of some god to float you to the sky. You contract and coil back before you hit the ground, so you can rebound with the swish of air flapping your sleeves, skimming your skin. You, the lucky few, are apparitions reabsorbed into the night. 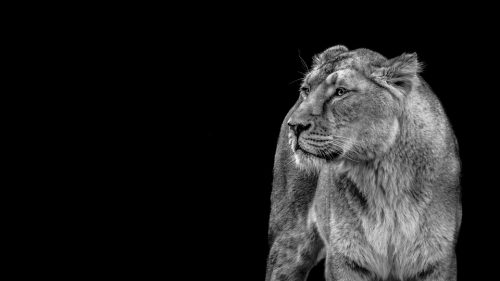 The rest of you, who cannot jump, consider becoming lions. You might mewl and cry with a blood-red tongue, gnashing through men as if powerful beasts don’t lose to guns all the time. You might each whisper down the line that tall tale of the kidnapped girl in Ethiopia, saved by lions whose ring of fur and flesh surrounded her and prevented a marriage. You might contemplate where resistance would get you: out in the scrubby bush, running on torn feet through sand and muck, hoping to find someone to beg a ride home. What girl might not picture that, and stay?

So in the end, you are ink, but not the ink of stories told in newsprint smudged by damp fingertips. In earlier days passed at your desks, a blotch of darkness seeping from a cracked pen would eat space on a page and leak over everything beneath it. Now you have become, and continue becoming, this creeping drop of silence, waiting. You have turned into the black hole at the center of your own story, into which everything disappears. You will struggle against the event horizon as you are crossing it, though no one will realize it. The light you’ll throw off as your path warps would have made the world glow.

Katie DePasquale enjoys telling a good story and making sure it’s correctly punctuated. Her writing has appeared in Blink-Ink, The Drum, Vida: Women in Literary Arts, and The Toast, among other publications, and her fiction has been nominated for a Pushcart Prize. She has an M.A. in writing and publishing from Emerson College and works as an editor at Berklee College of Music.

Loud in the Time of Chaos