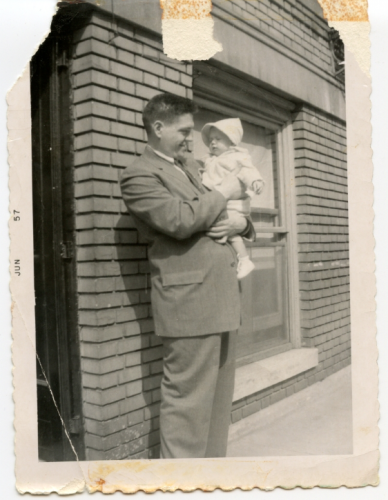 I hear breathing, a dry broken noise like fabric dragging on rough wood. On the wall in my hospital room, something shimmers in the afternoon light. It is my father. I sit up and avert my eyes and he becomes more defined, as if he is meant to be seen from the far side of the eye, where apparitions live.

The air is mineral-heavy, like it might rain inside the room. A sharp, sweet odor deepens around me—garbage and rotten apples. Sitting on the edge of the bed, I collapse forward, close my eyes, and hold my breath against the smell—but I can’t hide from the sound, a dry struggle to breathe. My father is lost and doesn’t know where to go. 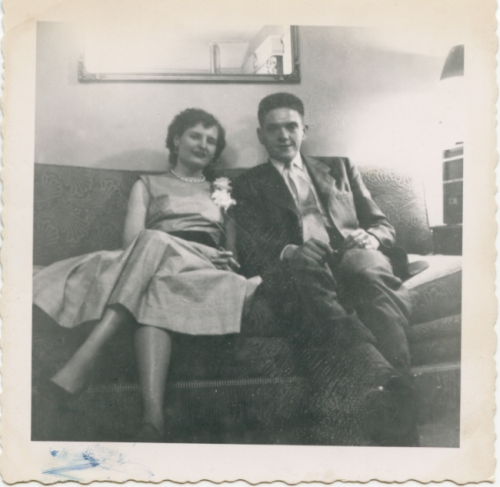 My parents throw a party in the big house on Park Hill in Yonkers. Grown-ups gather in the living room and there is a lot of talk and laughter, a record playing low in the background, Rosemary Clooney singing about the mambo.

My brother and I are the only children at the party. I am four and Jerry is five. My baby sister, Tracy, is still too small to be out of the playpen.

“Look, Mommy!” I say and dance side to side to the mambo song. The ladies laugh and clap.

Cigarette smoke drifts overhead toward the kitchen, blown by two fans set in open windows. Everyone is sweating. Two ladies take turns leaning their faces and bare necks close to one of the fans.

“Cheers, Vincent!” a man with rolled-up sleeves says to my father, who is holding a bottle and pouring more into their glasses. “And where is your mother-in-law this evening?”

“That great doorfull of a woman?” my father asks, and the man laughs boisterously. “Be glad she isn’t here, Emmet, she’s got a tongue that could clip a hedge.”

Someone takes the needle off the record and asks my father to sing “Nell Flaherty’s Drake.” My father stands:

Till some dirty savage, to grease his white cabbage

Most wantonly murdered me beautiful drake!

Everyone smiles and claps.

“To grease his white cabbage . . .” my mother echoes, then bows her head and laughs, her eyes wet.

“Sing the part about the pig!” Jerry cries out.

May his spade never dig, may his sow never pig

May each hair in his wig be well thrashed with a flail!

People raise their glasses. My mother says my father’s name: “Vincent,” and it sounds like the noise dimes and pennies make when he jingles them in his pocket.

“My uncle Michael never sang that one,” my mother announces to everyone, “and he knew them all. He and my father were off the boat!”

My father, who is standing in front of the screen door, takes his handkerchief from his pocket and wipes the dampness from his forehead. “Romantic Ireland is dead and gone,” he says. “It’s with O’Leary in the grave.”

Thunder sounds just then and everyone cheers. Behind my father there is a sudden downpour.

I go to my father and stand at his leg. I touch his freckled forearm and he puts a big hand gently on my shoulder, nods slightly at me.

“Thank God!” cries one of the ladies who had been standing near the window fans. “This should cool things off.” 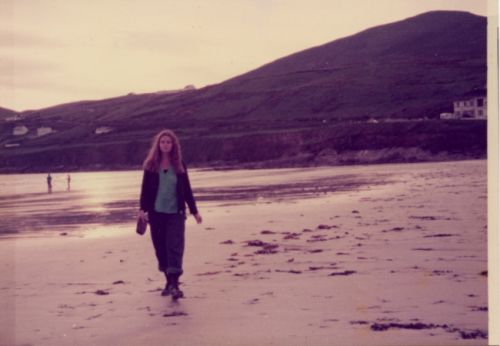 I am still a child when I find out that neither of my parents has actually ever been to Ireland and I wonder how they can love and miss a place their ancestors left before they were born. Yet somehow I understand. And even though I am young, the idea of Ireland fills me with an inexplicable nostalgia, as if it belonged to me once and I somehow lost it. 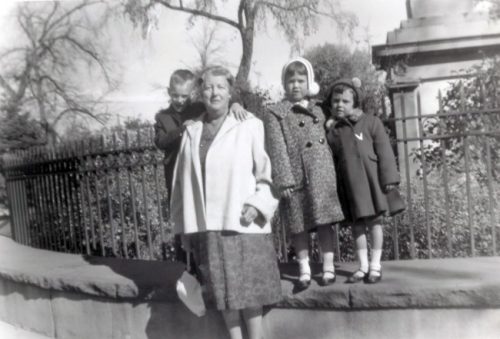 Nanny does not like our house in New Mexico. It is in a development on desert land just off the highway to Albuquerque. New houses are being built around it; construction workers yell at each other in Spanish between the deafening sputter of a power saw.

I like visiting Nanny in her room, where she sits on a chair most of the time with her door ajar, smoking Salems. She gives me Mounds bars and Hershey’s Kisses, sings to me, “I love you, a bushel and a peck! A bushel and a peck and a hug around the neck.” She calls me sweetie and tells me what a good girl I am. She praises my drawings and tapes them to the wall under her crucifix. I can close my eyes when I hug Nanny and feel the hard drum of her heart against my arm, and traces of my mother are there. 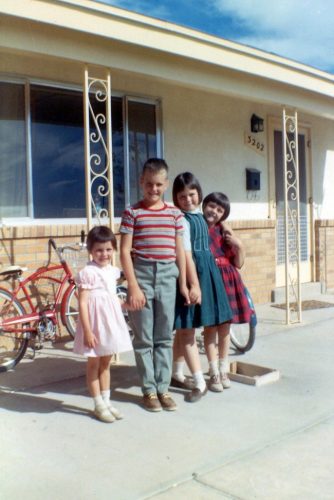 We four kids stand in a little group in front of the house. Dad holds the Brownie box camera at his stomach and looks down into the window at the top, where he sees us reflected. Then he snaps.

Jerry says that the camera has an eye that’s just like a human eye because the lens turns what it sees upside down. Dad taught him this, he says.

Later when the camera is on the kitchen table, Jerry calls me over to look at it.

I peer down into the square window, but all I see is a faceted chamber made of thick glass.

Jerry says, “When you press the click button, the camera remembers.”

When the Brownie box camera is left for weeks high up on the bookshelf in the living room, I wonder if it is my father’s eye and memory that are in there, separated from him. 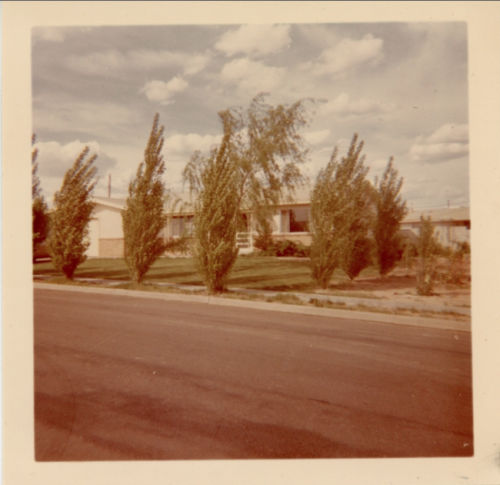 Dad has bought Mom a new camera. It is small and held to the eye, not to the chest or stomach like Dad’s Brownie box camera. Mom’s eye and the camera’s must be in synch. It sees what she sees.

I watch her on the lawn, watering the trees. After she turns off the hose, she crosses the street and holds the camera to her eye. She does this a few times, and then backs up a little farther.

Later, she comes in, removes the film, and drives away to drop it off for developing. I get the camera and take it outside, cross the street, and stand where she had been standing.

Is it the height of the trees she’s charting? When we first came to this house, the ground was unplowed, unirrigated desert land, dry and hard. My mother worked it until it was rich and black, the hose and sprinklers on for long hours every day until water ran over the sidewalks and down the sloping street. She planted gardens and a lush lawn, a willow tree and poplars that have grown into giants. In the dry desert neighborhood, our house is enclosed in its own forest of shifting shadows. 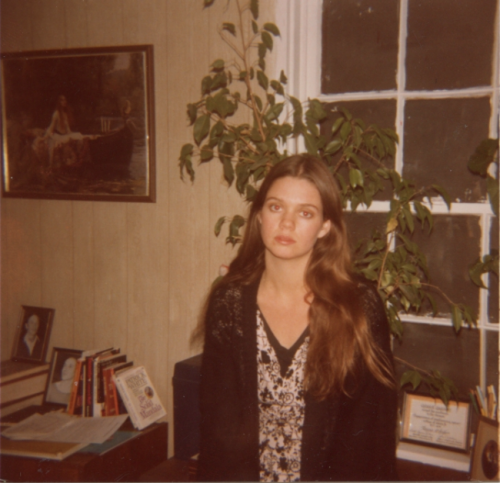 I’m sitting at the table trying to write a paper for school when I sense that something, someone, is lying very still on my mattress. I know it is a she. The air feels silky with this fact. She does not want to hurt me. She doesn’t threaten me.

I sit frozen, unable to move, and as if to snap me out of my paralysis, the refrigerator in the kitchen shifts on and hums, a low, steady rumble.

I know who she is. I stand, but I won’t look at her. She is me, deflated and tired with her eyes closed, lying on her back under the covers. I would go to her and smooth her hair and tell her that everything is all right, as if she were a younger sibling, except that I might discover that she is cold, that she is not breathing. Or even worse, she might be cold, not breathing, and then suddenly open her eyes. 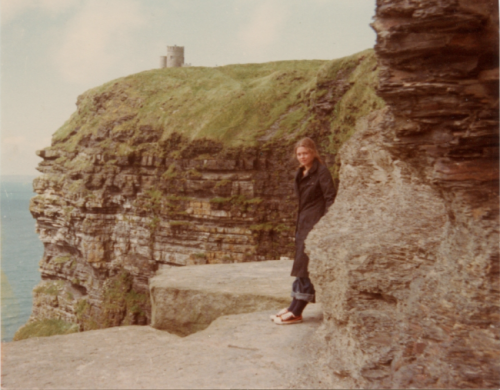 When I leave Inisheer very early in the morning to visit the other two islands, turf fires burn along the shore. We lift sail in a good breeze just as the sun arrives, the gray overcast weather utterly gone. I can see in every direction. The horizon to the west is endless, without a definite demarcation between sea and sky, and the mainland to the east, cliffs and lowlands, beach and rocks.

We soon dock at Inishmaan, which we tour on foot, a small group of us led by a tall, long-limbed Galway man named Michael Slattery, who asks us to call him Mick. We pass limestone cottages issuing smoke, fragrant of both earth and kelp. Curious children watch us from doorways. Indolent cows graze in fields congested with wildflowers.

Mick tells us that the three islands have four or five dark-haired families said to be descended from seals, and that less than a decade before, the local priest drove a witch from these shores.

After viewing gravestones defaced by weather, druid altars, and prehistoric forts overgrown with moss and lichen, we go on to the big island. Walking along roadways in the brightness, I search for signs of Laura, but she is nowhere to be seen. Mick remarks that the island is curiously empty of tourists for such a fine day.

I take out my map of Ireland and draw a tiny dot on the north point of the northernmost Aran Island. This is where I am in the world right now, ocean all around me. I look toward Galway Bay to the east, its circle of water washing into the Atlantic, where my grandfather and uncle Michael set sail for America.

Regina McBride is the author of four novels, including The Nature of Water and Air (a Barnes & Noble Discover Book) and The Land of Women. The recipient of fellowships from the National Endowment for the Arts and the New York Foundation for the Arts, she lives in New York City and teaches creative writing at Hunter College.