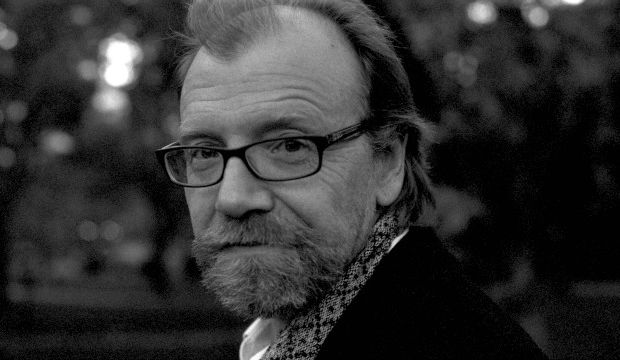 “He ogled old women and pregnant women and women whose photographs were passing on the sides of buses and, this morning, a woman with close-cropped black hair and tear-stained cheeks, who wouldn’t be half bad if she’d just make an effort, clean up a little and invest in some decent clothes, some white tights and a short skirt maybe, knee boots and a cowboy hat and a cigarillo, say, and he pictured her kneeling on a crude Mexican sofa, in a little mud hut, daring him to take her, and soon they’d screwed their way into some sort of beanfield while some gaucho guys played soft guitars, although actually he’d better put the gaucho guys behind some trees or a rock wall so they wouldn’t get all hot and bothered from watching the screwing and swoop down and stab him and have their way with Miss Hacienda as he bled to death, and come to think of it, forget the gauchos altogether, he’d just put some soft guitars on the stereo in the hut and leave the door open, although actually what was a stereo doing in a Mexican hut?” —George Saunders, “The Barber’s Unhappiness”

This is how we meet the barber of George Saunders’s “The Barber’s Unhappiness,” in the second sentence of what may very well be my favorite story of all time.

Our knowledge of Mickey the barber is sparse when this wheeling little sucker punch of a sentence hits. Here’s what Saunders has told us already: From the title, we know the identity of our hero, his occupation and maybe his class. We know, too, that something’s foul in the state of his personal Denmark. In the one sentence that precedes this one, we’ve been told that “Mornings the barber left his stylists inside and sat out front of his shop, drinking coffee and ogling every woman in sight.” It’s an opening line that’s got its intimacies—the chumminess of “mornings,” the fact that we’re witnessing the barber stepping into a private moment apart from his plebs, the cop to his “ogling.” Still, we seem to be planted at a safe third-person distance from the barber, outside of his emotional splash zone. 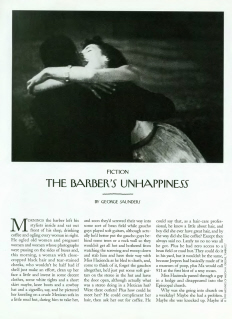 And then we get the tsunami of this second sentence, and, with it, the collapse of the distance between the barber’s interior and exterior lives—a distance that turns out to be the story itself. As Saunders unspools the barber’s mental workings, each phrase a step deeper into the inferno, he gives us in one fantastic line the heart of the whole matter: the hurt that lies in the disconnect between his reality and his fantastic expectation, most especially his expectations for himself.

When Saunders starts this mightiest sentence, he places the barber into almost literal conversation with the terms of his world. In a tricky slide of perspectives, observation of a street scene and of the barber himself slips quietly into that same barber’s happy recasting of reality’s players. The membrane here between fact and perception is thin, and ripe for renegotiation. Even in the sentence’s opening phrase, where we’re still tethered to the external world, we’re seeing a world selectively edited for relevance.

And what is relevant to the barber is women. “Ogling,” it turns out, doesn’t even begin to cover it. Saunders tells us this stylistically as the barber merrily gathers women en masse with “ands,” stacking them up like cordwood. When Saunders zooms in on Miss Hacienda, we seem poised for a minute to go back to the broader scene beyond the storefront, to Mickey’s connection to the world around him. Saunders notes Miss Hacienda’s “tear-stained cheeks” and dangles the possibility of the barber making a foray into empathy. But as quickly as the barber brushes unaware against the feelings of someone else, he reshapes the situation in the image of his own lonely ego. Mickey’s problem here is not Miss Hacienda’s emotional distress but its compromising effect on an already compromised appearance, an issue he generously allows would be avoidable if she’d “just make an effort.”

And here’s the first heartbreaking and lovable thing about the barber’s particular brand of delusional dickery: at the same time he starts dreaming Miss Hacienda into the beanfield, he starts wishfully to re-dream himself. Even in these private interior thoughts, we see him propping himself up, painting himself in the best possible terms—the suggested wardrobe upgrade would be an investment! He can see beyond Miss Hacienda’s surface to her potential! It’s all so hopeful and so oblivious that we actually like him in his racism and judginess and predilection for western wear, even as the scene turns to the stuff of gas station pinup calendar. By the time the barber is handing Miss Hacienda a cigarillo from the great bordello prop table in the sky, we’re as enchanted by the barber’s reverie as he is.

In my favorite moment of the whole sentence, with perfect dream logic and as the sentence’s humor hits terminal velocity, “screwing” becomes a means of locomotion; the barber and Miss Hacienda discover that in their amorous embraces, they’ve “screwed their way into a beanfield.” Saunders paints them both as dreamtime flotsam, subjected to the teleporting powers of the barber’s desires. The scene is simultaneously in and out of focus, under the barber’s control and elusive at the same time. He’s only in “some sort of a beanfield;” the “crude Mexican sofa” has been hastily scribbled in as he focuses on conjuring up the main event. 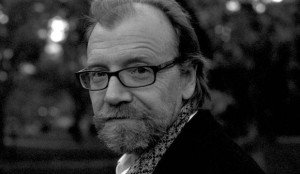 And this is the second heartbreaking and lovable thing about the barber’s unraveling, the source of his pain and hilarity both: his deeply flawed internal logic sees no problems with the big picture but a million with the small. While Miss Hacienda is “daring him to take her,” he can’t resist tinkering with what’s happening in the background. What can be done about the inevitable arousal of the gaucho guys? Where is he going to plug in the damn stereo? Even when said gauchos and their potentially murderous impulses can be avoided through the barber’s cut and paste, he can’t seem to make things come out right. The possibility of the barber’s happiness expands accordion-like, only to contract again, deflated by his needling of his own rankled soul.

The barber’s problems lie not so much in that he lives in his delusions, but that even they can’t live up to his expectations. Saunders uses this sentence to write in miniature this issue that is the whole of the barber’s unhappiness—that space between the way he wishes things could be and the way they are, and the fragile ego lying just behind his monologue that keeps him from shoring up that gap. The more clauses Saunders piles on here, the more he inflates the barber’s delusions, the more exposed the barber becomes. He looks so small alongside his own rhetoric, waiting for a sympathetic read, that Saunders makes it impossible not to give it to him. Here’s the barber pushing back against his greatest vulnerability and showing it to us at once, hoping that we might see ourselves in it, too.

I first read this story in a class with Steve Almond, who talks about the idea of writing towards one’s shame. I’d be hard pressed to think of a better example. I thought of this story again when Karen Russell spoke about reading George Saunders to be reminded to write for pure joy. And I think of this story, this sentence, whenever I need to remember what the best writing is about: our lonely, longing, wasted, human hearts.

Will the barber find love? Will the stereo find its proverbial outlet? This is maybe the one element of the tale to come which Saunders’s sentence refuses to predict—well, that and driving class, and the wedding reception from hell, and the other absurd stages in which the barber’s interior life finds its real-world counterparts. When the sentence ends, we know only that the barber faces the steepest of uphill battles, and that we’ll be cheering for him all the way. While the threat of stabbing by gaucho may not hang in the balance, the not-so-small matter of his heart’s happiness does—and what could be of more fantastic importance?

Emma Komlos-Hrobsky’s writing has appeared in The Story Collider, Hunger Mountain, Hot Metal Bridge, and BookForum. She holds an MFA from The New School and is an assistant editor at Tin House.

The Art of the Sentence: Shirley Jackson