Early this summer, Tin House offered a few early readers a glimpse at Courtney Maum’s latest novel Costalegre. It’s been praised by writers like Laura Van Den Berg as “a high wire act that dazzles and devastates”; Samantha Hunt calls it “a brew of careless Bohemians, Führers and failed art students, negligent mothers and missing museums . . . as heady, delirious and heart-breaking as a young girl just beginning to fall in love with our world.” And, in the words of the starred review in Publishers Weekly, Costalegre is “A rich and delectable tale of art, love, and war. . . . This is a fascinating, lively, and exquisitely crafted novel.” 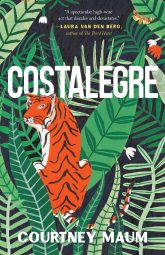 In 1937, war menaces Europe and Hitler’s list of “cultural degenerates” threatens the visionaries whose work is deemed antithetical to the new regime. To protect her favorite art (and artists), an impetuous art-collecting heiress named Leonora Calaway spirits an elite group of surrealists away to Costalegre, a mysterious resort deep in the Mexican jungle. However, a sojourn with surrealists is hardly likely to relieve the deep sense of creative alienation and intellectual isolation felt by Leonora’s neglected daughter Lara. Through her diary entries, letters, sketches, and asides, Lara paints a precocious portrait of loneliness, longing, and a teenager’s detached amusement as the adults around her struggle to reconcile artistic ideals with painful political realities.

In the words of R. O. Kwon, “This is a book for anyone who’s ever loved, and not felt sufficiently loved in return; and for anyone who’s had to try to grow up; for, that is, everyone.” Check out what our Galley Club Members thought below!

Do you have a favorite line from Costalegre?

Thanks to our wonderful Galley Club members for exploring Costalegre with us. Interested in being part of Galley Club? We’ll announce the next Galley Club for Jeannie Vanasco’s gripping memoir Things We Didn’t Talk About When I Was A Girl on social media in a few short weeks, with instructions on how to enter.

Galley Club: Who Is Vera Kelly?