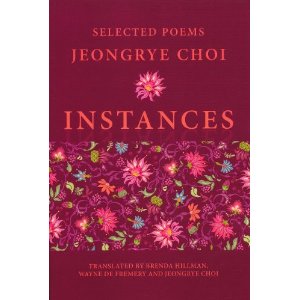 Our West Coast poetry editor, Matthew Dickman, has the charming habit of leaving notes around the office for the staff. Taped to the bathroom mirror or left on a chair, his musings always bring a smile to the face. We hope his new semi-monthly feature does the same for your spirits.

I love the mail.

I love coming home and finding a letter from a friend, finding a postcard from a sibling— something special, something strange. But then there will be weeks of nothing but catalogs and bills. I was living through a series of those weeks until the other day I arrived home to find a small package: a book of poems.

About a month prior the South Korean poet Jeongrye Choi had been in touch with me on Facebook. I had sent my address and suggested we write. I knew nothing about her or her work. Had certainly never heard of her. That is until I opened the book of poems she sent and began reading them. Not only began reading them, but reading them over and over.

“Instances: Selected Poems” is Jeongreye Choi’s first collection in English. The book is published through Parlor Press and translated by Brenda Hillman, Wayne De Fremery, and the author. It’s a book of wild imagination. A book of intense energy which has in its DNA poets such as James Schuyler, Bob Kaufman, Anne Sexton, and even some Dorothea Lasky. I don’t know if Choi has read any of these American poets but they are present in her work. Or maybe they are not. It could be that Choi’s voice is simply so strong and exciting she belongs at the same dinner party as some of our most loved poets without any formal introductions or assimilations.

I plan on sending a copy to another friend. You should too. Choi’s poems belong in houses all over America.