When reading Daniel Fights a Hurricane, the new novel from Shane Jones, one experiences a series of shifts between an environment that is nearly normal, and one that alternates between enchanting and disturbing. The book’s seemingly mundane beginning describes Daniel’s visit to a therapist for his anxiety over an approaching hurricane he believes will destroy an oil pipeline. Shortly thereafter, the reader encounters a fantastical Village of Underwater Pipes, a door in a grassy field, and a protean Hurricane with occasional human characteristics.That Hurricane is a constant menace, at times potentially unreal, that “places its face into the ocean and blows bubbles,” “throws a handful of mashed-together birds past the bedroom window,” and is imagined as “howling above, sweeping its hands back and forth against the ocean, claws dragging through the top few inches of water.”

I was recently lucky enough to talk with Shane about his work (which has also appeared on this site). While on the surface, Daniel Fights a Hurricane can be read as a story of one man’s disintegrating marriage and fear of nature’s destructive power, beneath that is another world (or worlds) enriched by dream states, visions, and a beauty that transforms.

Brooks Sterritt: Your first novel, Light Boxes, came out with Publishing Genius Press (an independent) before getting picked up and reissued by Penguin. Did you write Daniel Fights a Hurricane with Penguin in mind, so to speak? Was there any added pressure after the transition to a major publisher?

Shane Jones: Knowing Penguin was going to read the next book (it was in the contract for Light Boxes) added some pressure, yeah. But a lot of that pressure I put on myself – it didn’t come from Penguin people. It was a kind of, “You’re a piece of shit that just got really lucky with that Spike Jonze deal and you’ll never get another book published again, you hack.” That’s pretty much exactly what I told myself some days. Is that messed up or what? I just didn’t want to stop writing, or take like five years to write another book. I started Daniel a few months after Penguin accepted Light Boxes and less than a year later they bought it. I worked faster and harder than I ever had before. Knowing Penguin was going to read it didn’t change my style or approach. This book is still weird and fun and I think different than most books being published today by major houses. Which means it’s going to sell like 40 copies probably.

BS: What would you say was the genesis of Daniel Fights a Hurricane? Did you draw on your dreams at all while working on the novel? 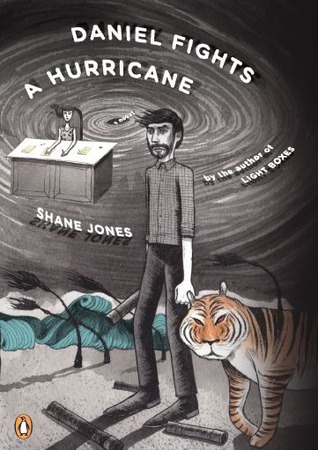 SJ: The genesis was that I wanted to destroy reality. I never remember my dreams.

BS: In an earlier interview you talked about your stance on portraying characters engaged in evil acts. Has your thinking shifted with Daniel Fights a Hurricane, or do you still avoid having characters do terrible things?

SJ: I think the character Iamso gets kind of evil and terrible toward the end. And there’s that scene where the boatmen are butchering the elephant on the beach and people are running through the spray of blood and water. Helena and Greta are pretty wretched, and so are the Hurricane as children. There’s some other stuff to that is kind of evil. Man, I guess my thinking has changed. But there’s a similar balance in Light Boxes, I think. I just don’t have, like, a character who just murders or just rapes and there’s nothing else. That would feel real evil to me. There’s this group of writers I’ve been thinking about lately – Richard Brautigan, Jane Bowles, Barbara Comyns, Robert Walser – and I think they all write characters in this really compassionate, charming, but twisted way. They do really surprising things both illuminating and sometimes they go real dark. And I think I’m influenced by these writers. I’m influenced by that weird balance.

BS: I did notice more literal blood in this novel, whereas in Light Boxes it seemed to show up as other substances, like leaves. How do you react to the overt violence in the work of a writer like Brian Evenson (who blurbed Daniel)? His work seems able to function outside of any moral considerations at all.

SJ: Overt violence in literature doesn’t bother me, and in many instances, can be really beautiful – I’m thinking of Evenson and people like Cormac McCarthy. The violence is necessary to the story and adds a certain energy/excitement level. Even the book I’m reading right now – David Mitchell’s Number 9 Dream – has some pretty intense violence and it’s stunning and amazing what he does. And I think writers and artists should all function outside of any moral consideration. I’m not sure it’s a place for morals. I understand it can be, sure. But if a writer wants to write about chopping off heads, go for it. I think what I’m more offending at is stuff that is super violent but done poorly. Mainstream movie violence is something I don’t personally like. It just feels lame and silly.

BS: Could you tell me a bit about the cover’s selection process? Is the illustration of the tall, bearded guy based on you?

SJ: The first thing my Mom said when I showed her the cover was, “I like this. Is that you? Are you Daniel?” A few other people have asked the same thing and it was never discussed between myself and Ken (the cover artist) to draw me. It just turned out that way. The cover depicts a skinny sad-sack with a beard and that fits me pretty well. As far as the process, early on Penguin said they wanted to have this book be the same dimensions as Light Boxes and use the same cover artist and I was all for it. Ken came up with a sketch, I approved, and that was it. I’ve heard horror stories of authors hating their covers, but this process was really easy. I’m going to say it right here and right now – it was the easiest cover process of all time.

Brooks Sterritt’s writing appears or is forthcoming in Denver Quarterly, LIT, The Southeast Review, TRNSFR, The Madison Review, and elsewhere. He edits reviews at HTMLGIANT, and currently lives in Boston.