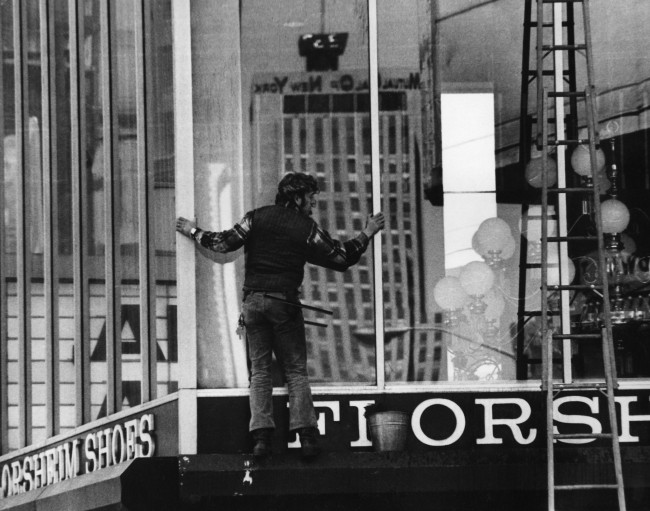 Just after four in the morning in Shanghai, I remember again that you haven’t responded to my email. From the taxi window I watch a man balance on a story-high orange ladder, scrubbing the exterior of a Dolce & Gabbana store with a sponge glued atop a long pole. A white spotlight cuts the dark, exposes the smog, and frames the man, awake when everyone else is asleep. Everyone except me and the taxi drivers and the other migrants, marking the road with fresh red paint, and the patrons of the nightclub I’m fleeing, where the pulsing music may or may not have disturbed the sand sharks circling in their tank, and where a dancer fell from her ledge but climbed back up. 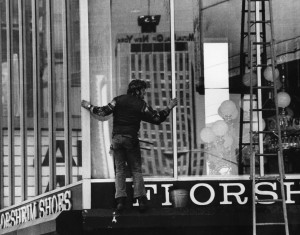 A bus ride to the provinces may require as many hours as my flight home.

As he presses sponge across marble, does the worker think of his girlfriend and want to claw himself open until he is with her, undoing his decision to leave? Is necessity enough to console him? It is not enough to console me. But then mine is not real necessity. I chose to work among these skyscrapers built in a week. I want to know: are you laughing about forgetting me? And I want to know what keeps that man able to balance on that ladder and scrub that façade when his beloved is inaccessible, warm and soft somewhere asleep. He must be scared. But the man’s loneliness as mine is just a projection, I know. Projection, one of my New York concepts, tools I can wield to distance one part of me from another. Maybe this man can afford whores near his barracks, can eat beef dumplings and fried shrimp, is relieved to have escaped his hometown’s incessant flies and foul smells and obligations and gossip. Maybe he’s content to send money. Maybe he thinks of nothing as he slides his sponge across the store. He has been nowhere else; he knows no other fate. He does as he’s told. The sponge’s sweep is satisfying. He feels only an absence of feeling as he redirects his caresses to Dolce and Gabbana’s exterior, showing it such tenderness.  Or he’s proud to protect shoppers from recognizing that the specks of coal that float around us, then in us, coating our organs and skins, hurrying our deaths, also cling to the big-lighted city, his new city. He caresses so we can forget everything we are breathing and becoming. Nothing needs to be left behind.

Meaghan Winter is a freelance writer glad to be back in New York, the land she loves.