I was looking for a song. All around Bed Stuy were these record shops that were really junk shops that were really some guy’s basement, accessible from the street. Summer afternoons, I dug through stacks of disintegrating LPs in dim, mildew-scented cellars.I had heard it at a party or in a passing car or a bar—where in the year 2000 in New York, I could still drink at nineteen years old. This was before Shazam, before I bought my first cellphone. It was before mp3s took over, when we still had binders of CDs, before I stopped making mixtapes. I was studying creative writing in college, but spent my nights and weekends shooting speedballs and fanatically arranging playlists on blank tapes whose tracks I piped from the record player in my apartment to the heavy double cassette deck that sat atop my record crates.

No, no, no, went the song. You don’t love me and I know now. No, no, no. It was a haunted minor-key blues progression transformed by the one drop rhythm of reggae. The singer’s voice seeped languorously over the beat, No, no, no, you don’t love me yes I know now. She was broken hearted but oh so far away, her keening remote, transmitted through a pipe, or the distant end of a telescope. It was a sound I recognized from Billie Holiday, whose music had prompted me to study singing for four years. It was the early Phil Spector hits that I had gorged on as a girl. It was spooky and sad and sunk its teeth into the soft bowl of my hips, set them steady rocking. Her lover was not there to listen so she sang to us, to her own cracked heart maybe, of that sorrow emptied of desperation.

I was sorrowful and I was desperate. I craved that distance from my own relentless hungers, a remove at which the tragedy of them could be a pretty, haunted thing. A story to tell to the bartender. A song to play at the end of the night.

I must have known I’d find it. I also appreciated the easy tension of looking for something that I simply wanted, that I didn’t need the way I needed heroin. It made me feel human. And unlike heroin, sometimes when I found a thing I wanted, I got to keep it – that hunger sated for good. 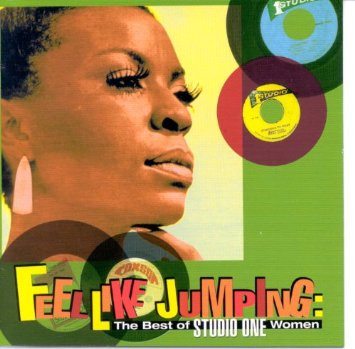 Feel Like Jumping: Best of Studio One Women was one of the more satisfying purchases of my young life. I listened to that record more than any other, more than “Crimson and Clover,” more than Cyndi Lauper’s cover of Prince’s “When You Were Mine,” more than Otis Redding. Well, maybe not more than Otis.

My only easy memories of those years are Sunday mornings home alone. If I wasn’t dopesick, if I had enough weed to roll even a small shwaggy joint, if I didn’t have anywhere to be or anything to chase, I could slip that record on and just be okay—a rare and precious quality for me back then.

Studio One, “The Motown of Jamaica,” was founded by Clement “Coxsone” Dodd who cut his first recordings at the Kingston studio in 1963. His house band, Sound Dimension, defined the trademark sound that evolved ska into rocksteady into the reggae that birthed dancehall in the late seventies and was introduced to a mainstream white audience through the hits of acts like Blondie, Paul Simon, and The Beatles

Griffiths was best known for her 1989 recording of Bunny Wailer’s “Electric Boogie,” the highest selling reggae single by a woman singer in history and the basis for the dance, “The Electric Slide.” “Feel Like Jumping” was her first success, in 1968. It’s a good song, though far from my favorite on the album.

My favorite, the song I had sought in those basements, was Dawn Penn’s “You Don’t Love Me (No, No, No).” It is a 1994 dancehall revision of a song Penn recorded at Studio One in 1967, based on Willie Cobbs’s blues standard, “You Don’t Love Me,” which was based on Bo Diddley’s earlier “She’s Fine, She’s Mine.” That is to say, encoded in the song is the history of American music, at least as it interests me.

In a recent literature class, frustrated by my (all white) students’ slowness to grasp the legacy of Frederick Douglass’s narrative; the progression from it to the works of James Baldwin, Zora Neale Hurston, and ZZ Packer; I resorted to an analogy I knew would reach them faster: music. Through the classroom projector, I played recordings of early African American prison work songs, Youtube videos of early rhythm and blues performances, Nina Simone’s “Mississippi Goddamn,” and finally Kanye West’s “Jesus Walks.”

I didn’t explain how the name, “rhythm and blues” evolved from “race music” or that Bo Diddley’s name likely derived from a hybrid of the “diddley bow”—a West African influenced instrument played by southern field workers—and “diddly squat.” But I did draw a line on the chalkboard and suggest that at its leftmost end were American slave songs, and nearly all the musical culture that they had ever worshiped was traceable along that line.

I knew only a little about this progression when I was their age, when I found this album in a Bed Stuy basement. I knew better what sounds set my hips rocking and echoed my own heart in their howl. I heard the Rolling Stones before I heard Muddy Waters, Blondie before Marcia Griffiths, Paul Simon before Lee Perry. But the further back I followed that sound, the clearer I heard it.

Music is my one true hobby. It is the only thing I have loved as long and as hard as I have loved books, and perhaps is a purer love, because I have loved music privately, never conflated its value to me with my value to anyone else. Music performs the most direct alchemy of all art that moves me—a universal pain rendered beautiful in its specificity. Encoded in the musical DNA of every song I love is the long tragedy of our human history, not just lovesick hearts, but the colonization of land and bodies and sound, and the ways people have found to answer it.

The word reggae is said to have originated in the Jamaican patois term, streggae, which denotes a loose woman, a raggedy woman. Maybe, I love it so because I am also a woman who has made art out of a loose place, a raggedy place. And the naming of my own pain has been my best solution.

I still listen to the music I discovered in my worst years: Studio One era reggae, dancehall, and soul songs typified by (especially the early) Stax Records. In these songs and on my favorite tracks of Feel Like Jumping are the same irresistible ache nestled in the cradle of rhythm.

Back in 2000, the only place I much felt like jumping was off the Brooklyn Bridge. I might have died back then. I came close. The things that saved my life were art and faith and the love of good people. The practice of prayer, like the practice of creation, like that of love, is a lot like moving to those old dancehall hits—the mind recedes, the body’s percussion takes over, becomes a boat that can carry that weight when our minds cannot.

It was a dark time, a keening time, and it has passed. But the stutter of the one drop rhythm still moves through me, as it moved me through those Sunday mornings.

Melissa Febos is the author of the critically acclaimed memoir, Whip Smart (St. Martin’s Press 2010) and the forthcoming essay collection, Abandon Me (Bloomsbury 2017). Her work has been widely anthologized and appears in publications including The Kenyon Review, Prairie Schooner, Glamour, Guernica, Post Road, Salon, The New York Times, and elsewhere. The recipient of an MFA from Sarah Lawrence College, she is currently Assistant Professor of Creative Writing at Monmouth University and MFA faculty at the Institute of American Indian Arts (IAIA). She serves on the Board of Directors of VIDA: Women in Literary Arts, and co-curated the Manhattan reading and music series, Mixer, for eight years.

Get Your Salon On, Enlightenment Style