While it is not a big secret that I admire female poets, it was geometry, not gender, that first drew me to Rachel Zucker’s work. Along with a deliciously catchy title, Zucker’s third book, The Bad Wife Handbook (Wesleyan Poetry), was published long and horizontally, the distinct shape of the book a perfect match for her use of language, which is playful, authoritative, and full of memorably long lines.

Her new collection, The Pedestrians (Wave Books), is filled with images of place, the wild, motherhood, and marriage, but it’s also much like a well stocked pantry of “food for thought,” specifically: dreams and myths. It is no surprise then that the book is split into two parts: “Fables” and “The Pedestrians,” and in both, the reader is immersed in the outskirts of everyday life.

At the end of the day, sometimes all we have is thought and language. Sometimes our home, or more specifically, our city gnaws at us. In “The Other City,” Zucker writes, “She realized/ that this city, so unlike her city, was exactly like her city and/ that everyone in her city was exactly like everyone in this city/ and that they were all animals and that animals can only be animals.”

One of the true pleasures of the collection is the way Zucker channels both the everyday, pedestrian life, but also delves into the life of our unconscious, with its tug and pull on truth and illusion. In this, The Pedestrians is anything but monotonous.

Leah Umansky: In a lot of ways, your writing about Manhattan reminds me of Michael Cunningham’s The Hours, a book I cherish. This is seen especially in the first fable, “The Old City.” In your book, Manhattan is also layered, as is the speaker. There is a wilderness inside her as a woman, much like Clarissa Dalloway.

Cunningham says: “ You know the story about Manhattan as a wilderness purchased for strings of beads but you find it impossible not to believe that it has always been a city; that if you dug beneath it you would find the ruins of another, older city, and then another and another…” (14)

Rachel Zucker: I read The Hours years and years ago and don’t remember anything about it except that I loved it. I’m thrilled by your comparison! I am interested in the way that Manhattan is very old and very new at the same time. Other major cities don’t feel quite like that. The European cities that I’ve been to feel much more attached to the past than New York feels to me. But New York also isn’t in love with “pop” the way I imagine Tokyo is (although I haven’t been there and might be completely wrong). 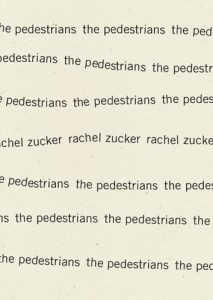 LU: Let’s talk about the physical makeup of the book as it’s broken up into two parts: Fables and The Pedestrians. How do these parts speak to each other?

RZ: These are really two separate books. I always imagined they would be published separately and had once hoped that Fables would be published with illustrations. The writing of both books overlapped and both of them are autobiographical and therefore there’s a lot of overlapping content and concerns. When Wave suggested publishing these together, I wasn’t sure at first but eventually really loved the way the two books talk to each other. I think it’s a better and more interesting collection with both books in one than it would be if they’d been published separately. Also, frankly, I can’t sell this many books to the very few people who are interested in buying my books.

LU: How did the “Fables” come about? They feature many animals, but in a non-traditional sort of way. There are jackdaws, hedgehogs, bees, and snakes among others. What I love about them is the way the speakers reside half in the fable and half in real life. She’s a “jackdaw,” yet her husband has a “snaked tongue.”

RZ: I started writing Fables over the summer. We were staying in Scarborough, Maine where they have a fabulous public library. Every few days we’d take out a bunch of picture books for our youngest son. I checked out a few different collections of fables and was thinking about the fable as a form and trying to figure out why I didn’t like it, especially the way the stories collapsed into the “moral” at the end. At the same time, I’d bought this notebook that had boxes on each page. I decided to write some of the morals into these boxes—things like “slow and steady wins the race” or “one good turn deserves another” or “it is not only fine feathers that make fine birds”—and then write little descriptions about my life around these boxes. I was playing with the interaction between this set destination and what came before. I was also thinking a lot about the role of animal in the fables and my own relationship to animals (especially as a life-long New Yorker in a more rural environment).

LU: Interesting. Well, how are the fables not traditional fables?

RZ: Initially all my fables had titles like “The Fox and the Stork” or the “Oak and the Reed” and they all had a moral at the end. Gradually, I winnowed away some of the morals at the end of each piece and finally took out all the morals. Later I also took out the titles. The form of the fable still influences (or haunts) these pieces which is why it was important to me to call them fables.

LU: You’re a professor, and a critic. So, I think it’s fair to say texts are a part of your life. Do you notice when other texts enter your work? I mentioned that I thought of The Hours while reading your book, but I also thought of Emily Bronte’s, Wuthering Heights. What is your relationship to other texts when you are writing?

RZ: I think you might be the first person to ever call me a critic! Am I a critic? I don’t think so. Am I a professor? Not sure. I am definitely a writer and definitely a reader and a teacher. Everything I read enters into my poems either directly or indirectly. But not just the texts – everything. Things my kids say. Questions my students raise in class. The TV shows I watch. You have fabulous TV-show poems. I don’t have any poems that directly take up the shows I watch, but I know that all of it informs my work. A few years ago, I was reading a lot of King Arthur legends to my sons and I think the diction and pacing of those came into the poems.

LU: Thank you, yes, I never thought TV would enter my work, but that’s the fun in poetry. There are great surprises. I love what you said about how we take on other diction and pacing in our writing when we are reading outside texts. So, all of the “Dream Poems” in “The Pedestrians,” are fascinating, and when I say “fascinating” I kind of mean, at times, they are “terrifying.” Let’s take a look at “Plant Dream,” as it’s something I think many people can relate to. In “Plant Dream,” the speaker has a window plant and says, “If I just forget about it and leave it alone, it does really well. Further out on the fire escape there’s a plant I’ve never seen before flowing with lush, white flowers.” ( 89) I noticed a thread of planting and gardening woven throughout The Pedestrians. Gardening takes attention and nurturing, much like motherhood, and coincidentally, like writing. As a writer, you harvest words and stories. As you are a parent, I imagine you harvest your love, tenderly.

RZ: Interesting observations, but I feel I need to say, right away, that I am terrible with plants. I have no knack for it at all. I’m finally keeping these two plants alive pretty consistently, but all my other plants are constantly dying and being replaced. Luckily I’m a much better mother than plant-person. I don’t want to say gardener because I’ve never had a garden but would love to one day. I think the plant dream in The Pedestrians comes out of my anxiety about plants and caring for plants. I’m not sure what it means to harvest love, but I’m interested in that phrase.

LU: In this book, and one of your previous books, The Bad Wife Handbook, you often trail around the fields between girlhood and womanhood; girlhood and motherhood, even girlhood and boyhood. How much is gender a part of your writing, as the speaker of many of these poems is a mother of three boys? Clearly, she is outnumbered.

RZ: I think I write about motherhood and womanhood but not so much about girlhood. I don’t have a strong sense of my own girlhood and don’t feel connected to the culture of girl-ness. I don’t know how to separate my sense of the world and my physical being or even my language from the fact of my gender. My sense is that this might be an antiquated thing to say and even offensive to those who believe that gender is very fluid or that gender doesn’t exist. I’m trying to listen to the way my sons talk about gender and the way as a culture we are rethinking sex and gender and sexual orientation in more subtle and complex ways. I worry that my feelings about the determining qualities of gender in my life are akin to the way my parents and grandparents felt about their heterosexuality. My feeling is that I am writing out of a woman’s body and with a woman’s voice and that these things are meaningful. But perhaps these feelings are problematic in ways I’m barely aware of.

LU: Yes, I love that: “Writing out of a woman’s body and with a woman’s voice.” I agree with you there. So, in the title poem “The Pedestrians,” the speaker asks, “Is this writing work?” I think it is and often think it is also the most rewarding. How would you answer that question?

RZ: Writing does feel like work sometimes, but it’s complicated. First of all, I am (mostly) not paid for my writing and work is often equated with “gainful employment.” Also, my writing is not work the way my teaching is work or my husband’s teaching is work. If one of our kids is sick, my husband will not take a day off of teaching and stay home so I can write. That would be absurd. My writing doesn’t take up the same position in the family or in the society that other kinds of work do. It’s almost always last on every list of priorities, even my own. Is this interview more or less important than my creative work? Probably less important, and yet here I am doing it first, doing it instead of writing.

Rachel Zucker (@rachzuck) is the author of nine books, most recently, MOTHERs and The Pedestrians. Her book Museum of Accidents was a finalist for the National Book Critics Circle Award.She lives in New York with her husband and their three sons. She teaches at New York University and is currently a National Endowment for the Arts fellow.

Leah Umansky is the author of the Mad-Men inspired chapbook, Don Dreams and I Dream (Kattywompus Press, 2014) and a full-length poetry collection, Domestic Uncertainties (BlazeVOX, 2013).  She is the curator of the COUPLET Reading Series in NYC, and writes for Tin House and Luna Luna Magazine among others. Her poems can be seen in POETRY Magazine, Poetry Review, and The Brooklyn Rail. Flavorwire named her #7 of 23 People Who Will Make You Care About Poetry in 2013.