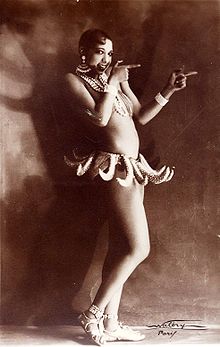 It takes a special kind of person for whom you can toss together in the same sentence the words “gambol,” “Les Folies Bergères” and “poor girl from Saint Louis who at nineteen charmed and otherwise seriously seduced the art and theater scene in 1920s Paris with her seductive combination of beauty, sensuality, whimsy and physical agility all wrapped up in a little skirt strung together with sixteen satin bananas.” This is the kind of woman who puts new meaning in morning coffee when she says of her lover, “He was my cream, and I was his coffee and when you poured us together, it was something.” This is the same woman who fought with the French Resistance and tucked away messages written with invisible ink amidst her sheet music and lingerie. At once gazelle and Amazon, sophisticated and savage and sultry, Josephine Baker knew how to play up the fascination with exotica and the deep love of erotica so vital to Paris in the Roaring Twenties. About her performances, she declared, “I wasn’t really naked. I simply didn’t have any clothes on.” Her affectionate—for the period—nicknames included Black Venus and La Bakaire; and Picasso, who painted her portrait, christened her “the Nefertiti of Now.”

Writers were particularly smitten by her; Colette deemed her “a most beautiful panther” (and given the fact that Baker was both chic and wild and often accompanied by her pet leopard Chiquita, the sobriquet suits her well). Langston Hughes collected her pictures, postcards and newspaper clippings. Playwright Anita Loos noted Baker’s “witty rear end.” Italian playwright Luigi Pirandello, Jean Cocteau and F. Scott Fitzgerald were ardent admirers. For e.e. cummings, Baker was “a creature neither infrahuman nor superhuman but somehow both.” Hemingway said that she was “the most sensational woman anyone ever saw, or ever will,” and the New Yorker’s Janet Flanner wrote, in the 1930s, about Baker’s “magnificent dark body” in her stage debut and the resounding “scream of salutation [that] spread through the theater” after her danse sauvage with partner Joe Alex.

Baker also dipped into the literary world when her 1930s novel about interracial love, Mon sang dans tes veines, My Blood In Your Veins, was published (written with two collaborators). Opening a swanky nightclub in Paris called Chez Joséphine, she directed and published a house magazine that included poetry, fashion and art work.

She did not go unnoticed by the inimitable couple Gertrude Stein and Alice B. Toklas, and makes a cameo appearance in the “Treasures” chapter of The Alice B. Toklas Cookbook. The rich recipe for Custard Josephine Baker calls for sugar, a little flour and milk, kirsch, lemon zest, bananas and the mysterious liqueur Raspail, “for which it will probably be necessary to substitute another,” Toklas advises, letting the reader dream up what might best sweeten the dancer’s eponymous dessert. (I had the custard once at a late night Left Bank dinner party and whatever secret liqueur was added made for a smooth, delicate flavor.)

This brief column can only give a taste of Baker’s fabulous talent, wild popularity and clever sense of humor when she duly notes, “I like Frenchmen very much because even when they insult you they do it so nicely.” She has left her beautiful, indelible mark on Paris: visit la place Josephine Baker near Montparnasse or swim in the vast piscine named in her honor on the Right Bank. And, next month on May 20th, wherever you may be, you can celebrate “Josephine Baker Day” (created by the NAACP in 1951)—whether in high style or with low profile, with bubbly or bananas or both, raise a glass, a peeled fruit, or very high heel in her honor.