In 2013 I met the cartoonist, writer, teacher, and artist Lynda Barry at a writing conference in Cleveland, OH. I’d been a fan of Lynda’s ever since I read her magnificent novel Cruddy in 1999. That book led me to her comics, which always seemed to pull emotions out of me that I didn’t know were there. Her work has a way of capturing moments so that they feel like your own memories.

I was at the conference to teach. Lynda was teaching too, a combination art and writing class with the talented author Dan Chaon. My group met in the classroom next to theirs each morning. I had great students and we did good work together that week, but every once in a while there would be a burst of laughter from the room next door—and I would long to put an ear to the wall. 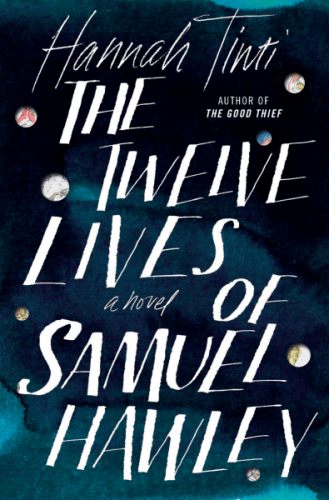 At the time, I was working on a novel called The Twelve Lives of Samuel Hawley. The book is a complicated story, weaving back and forth through time and following two characters—an ex-criminal named Samuel Hawley who carries twelve scars on his body, each from a bullet that nearly took his life, and his daughter Loo, a teenager trying to uncover the truth about her mother’s mysterious death. I’d found connections between the story I was trying to tell and the myth of Hercules (another violent man seeking redemption after the loss of his wife), and liked the idea of bringing elements of that ancient hero into my novel. But I was having second thoughts. I wasn’t an expert of any kind on the Classics, and the whole concept felt way beyond my talent and reach. Every time I opened my manuscript, I saw only flaws and mistakes. And yet here I was in Cleveland, trying to show other people how to write.

At the conference, each teacher was asked to give a lecture on their process. I enjoyed sitting in the audience, slipping back into the role of student. Lynda Barry’s talk was on the human brain and creativity. Adjusting her horn-rimmed glasses and tucking a strand of exuberant, curly hair into her red bandanna, Lynda asked: why do we stop drawing? When we’re children, drawing is a natural extension of our selves. It’s how we communicate before we even have language. Put any kid in front of a box of crayons and there is no self-consciousness. They just grab their favorite color. We stop drawing, Lynda said, when we learn to judge and criticize. When we realize that our scribbles do not match the images we are trying to capture. And, perhaps even more important, when we start noticing that someone else’s drawing is better than ours. We’re told by others (or decide for ourselves) that we are not “good” at art. And so eventually—we stop. And that joyous part of the human brain that flares and sparks when we doodle goes silent.

Why do we only do things that we’re good at? What would happen if you picked up a pen right now? Lynda encouraged us all to try. As we giggled and drew pictures of batman, she talked of how doodling could re-ignite parts of our mind and memory. Doodle on a regular basis, she said, and that spark of creativity could turn into a roaring fire.

I took this message to heart and started to draw every day. It was hard at first. I hadn’t tried anything beyond stick figures since high school. But after a while I began looking forward to the nonsense that came out of my pens and pencils at night. It showed me that a mistake or a stray line could lead somewhere interesting if I followed. And it gave me courage when I turned back to The Twelve Lives of Samuel Hawley. Who says I can’t write about Greek myths? Why only do something that I’m good at? 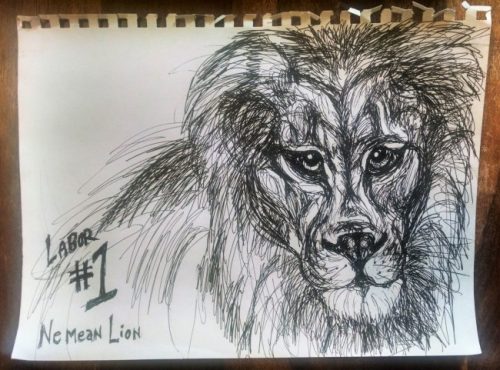 I re-read Hercules’s first labor: the Nemean Lion. After killing the beast, our hero cut off its skin and wore it like a cloak. In the great museums of the world there are famous paintings and statues of Hercules with the lion’s head pulled across his head like a hood. I tried not to think about them as I dug a ballpoint pen out of a drawer. I looked at pictures of lions on the internet. I did my best. I tore the picture out of my notebook and taped it to the wall. It wasn’t art, but it was something. And it gave me the idea of wrapping my character Samuel Hawley in a different kind of animal: a bearskin rug. He steals it and then uses it to keep his daughter warm as they travel back and forth across the country.

I decided to make a drawing for each of Hercules’s twelve labors. Each day I’d read another section of the myth and then I’d take out a pen. My goal was to internalize the details of each adventure and find ways to connect them to the modern world of Samuel Hawley.

I tried a doodle of the Hydra (a demon with many heads and Hercules’s second labor). During battle, the hydra grew back two heads for each one Hercules tried to cut off. This was something I could relate to. I scribbled away, tacked the monster up on the wall, then found a place for it in my novel, in the form of a tattoo. The second man who tries to kill Samuel Hawley has a Hydra twisting up his arm. 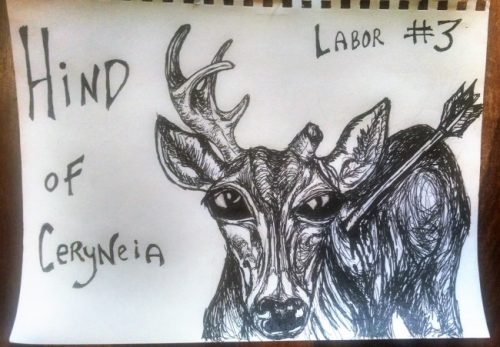 After that I dug into one of the lesser known labors, the Hind of Ceryneia. The hind belonged to Diana, and Hercules chased it for many years across the world. Eventually he caught the animal by wounding it with an arrow. I spent an afternoon drawing this deer. The eyes came out crazy, and when I put it on the wall next to the other pictures, I found myself staring back at it.

The deer made me think about how long I’d already been working on this book (about four years) and how far I still had to go. I etched this image of a hunted animal on the outer shell of a pocket watch that Samuel Hawley finds during his travels. It re-appears later at a pivotal moment, when he realizes that he is the one being chased.

I moved through the other labors—the Erymathian Boar, the Agean Stables, the Stymphalian Birds, the Cretan Bull, the Horses of Diomedes, the Belt of Hippolyte, the Herd of Geryon—dropping bits of each into my own story. Sketching out the myths shed new light on Hawley’s adventures, and taping another picture to the wall at the end of each writing day made me feel like I was making some kind of progress. 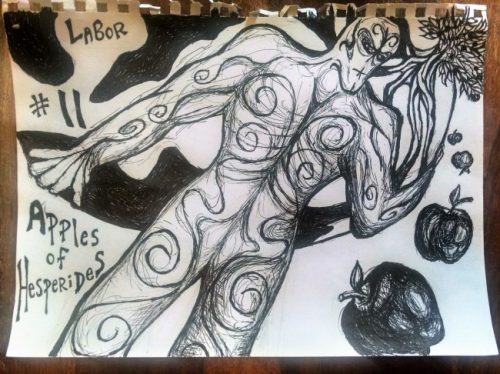 The labor I knew and remembered the most from childhood was number nine, the Apples of Hesperides. Hercules was supposed to gather the fruit from a hidden garden that belonged to the Gods. To get there, he tricked the titan Atlas, who carried the earth and the heavens on his back. Hercules said he’d take this tremendous burden from Atlas, if he brought him the apples. The titan agreed right away, but when he returned, Hercules tricked him into taking the world onto his shoulders again. The story was supposed to show how strong and smart Hercules was—but I remember feeling bad for Atlas, even when I was a little girl.

I looped together lines, imagining this ancient creature that had existed before the Gods. I added the apples falling, and thought of how it would feel to be crushed under all that weight. I ended up writing the apples into a chapter where Samuel Hawley nearly takes his own life. The only thing that stops him is the voice of his own daughter. I imagined Hawley finding new strength in that moment. Enough to pick the world up again and set it on his shoulders.

By the time I finished all twelve labors, the drawings stretched across my apartment. I still had a lot of work to do, but the bones of the story were there. I’ll always be grateful to Lynda Barry for teaching me to harness the power of doodling. To trust the wayward line. It lit up a part of myself that I hadn’t seen since childhood, when no one told me what I was good at or bad at. When I still grabbed as many crayons as I could.

The Story in the Stone

How to Stay Sane While Querying Literary Agents