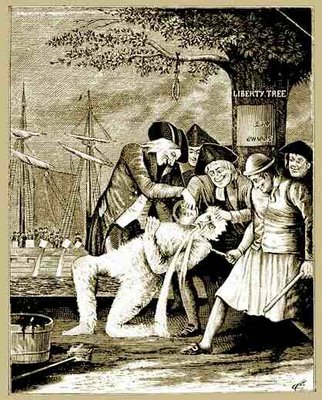 Myself, I advocate the classic glazed, but my loyalties here run deeper than mere tastebuds. I am, perhaps, blinded by a particular allegiance.

When my family first moved to Winston-Salem, my mother pacified us three kids with Krispy Kreme.

We’d been living in a small New England town for a decade, and now we were trundling south to Carolina, where suspiciously happy strangers asked after our church, where they didn’t have snowplows or a major league baseball team, where the lawns stayed greenish and bare into December. Jesus smiled benevolently down from billboards. Empty Skoal containers dotted the parking lot.

I was 15 and petulant. The Hot Now sign glowed off of Stratford Road.

Ushered inside, my brothers and I stood obedient in the palace of sweets. Solemnly, we placed the paper Krispy Kreme hats upon our heads.

Before us, clusters of doughy rings plopped into a shimmering bath of oil. They glowed under the fluorescence of the store. The rings floated along into the mechanical flipper, and on the other side, they came out golden, fried and beautiful. Like the gentle, corpulent attendants of a log flume ride, they bobbed drowsily forward until a metal rack lifted them out to dry land. They traveled along the belt, cooling, until they got to the heart of the process, the Kreme that followed the Krisping.

The glaze waterfall: thick, white, uniform. It appeared soft and curiously quilt-like. The donuts disappeared into it, and appeared again blessed, baptized in frosting. They travelled a couple more yards, cooling further to optimum donut temperature, until an employee delicately lifted three donuts and placed them in polka dotted wax paper to hand to us kids, bewildered, transplanted, transfixed by sugar: we three devoured. 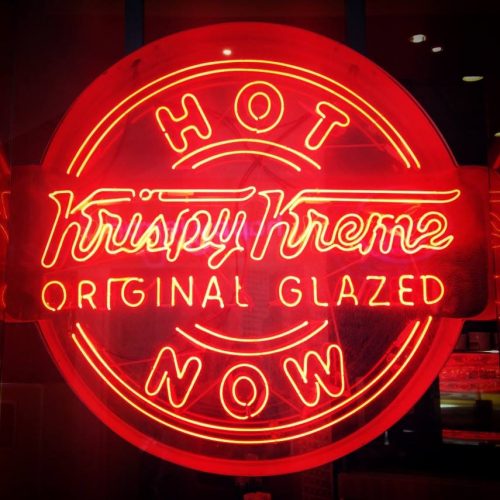 On its website, Krispy Kreme declares its mission is “to touch and enhance lives through the joy that is Krispy Kreme.”

I currently live 120 miles from the nearest Krispy Kreme institution.

When someone here says that they don’t like Krispy Kreme, I know that they are talking about donuts fetched from behind the plastic doors of gas station displays. I shake my head. I sigh. I picture the glaze waterfall, alight with a neon shine.

Their lives have not been enhanced.

Vernon Rudolph opened the first Krispy Kreme in 1937, choosing Winston-Salem because his favorite cigarette company—Camel—was centered there. Supposedly, he got the recipe from a French chef in New Orleans, or possibly an Ohio River barge cook.

Today, Krispy Kreme’s frosting-tinted domain stretches from Thailand to Australia to Qatar to Ethiopia, but the donut is irretrievably tied to a Carolina sense of place. The headquarters are still in Winston, neighbor to the restaurant where my brother now works. When the Panthers win, Krispy gives out free or discount dozens.

Krispy Kreme is the people’s donut, the e pluribus confection, the underdog of desserts. 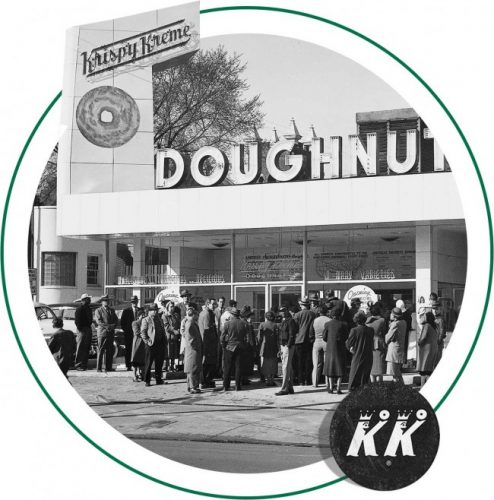 I source opinions from my old friend John. John is from North Carolina, rooted enough that he still talks catfish and wears rumpled seersucker, but he has since been shuttled up to New York, where, I assume, he is forced to count his calories and choose organic, whole-wheat bagels from a thoughtfully curated display.

“Do you miss Krispy Kreme?” I ask him.

“Yes,” he replies, “Mostly in a conceptual way.”

I understand his meaning—nostalgia, the powerful homeward draw of Hot Now— but concept seems somehow antithetical to the Krispy Kreme donut. Kombucha, for example, or almond milk, may thrive on the conceit they represent: vague ideas about wholesomeness and healing and inner purity. But the donut, and Krispy Kreme in particular, demands attention to the physical, a focus on the immediate and sensory, the food’s very making presented before you in all its gory, delicious detail. Concept here actually becomes dangerous: it’s important not to think too hard about what it means about you– about your life– if your life is one of those that has been enhanced “through the joy that is Krispy Kreme.”

Consider the physical. The glaze sticks to your fingers, and you’re obliged to lick them clean. Don’t consider where they’ve been.

“You have to get them warm,” John adds. This, he has not forgotten.

Below Krispy Kreme’s declaration of their mission, the website also lists their beliefs.

The first one is the mildly threatening declaration, “Consumers are our lifeblood, the center of the doughnut.”

I ask my dad about the perfect donut. He replies quickly, with a paragraph detailing the donut, the donut time, and the donut place: “Set and setting play a role,” he begins, “So, for pure id driven pleasure, a greasy, warm, classic glazed from a Dunkin Doughnuts from the gas station on Merritt Parkway, coming up from New York on a Saturday morning to see you guys when I was working in the Big Apple. Eaten while driving 10 miles an hour above the speed limit and trying to hold it in one of those pieces of tissue so I wouldn’t end up with a sticky glazed steering wheel.”

It is, in the end, just a sugar-coated, lifeblood-suffused sweet. But it’s just that hyper-enthusiasm for the treats that leave others cold—Krispy Kreme, grits, spicy pickled okra—that lets you know there’s somewhere you belong.

This donut is our own. Sing its praises.

Delaney Nolan’s work has appeared in Electric Literature, Guernica, Oxford American, and elsewhere. She is just starting a Fulbright year in Thessaloniki, Greece, roughly 400 miles from the nearest Krispy Kreme