Will you go on a date with me? YES or NO.

It was typical of Portland to find me the Faux Museum, with its current exhibit “Collections and Anomalies,” just when I was being most distracted by collecting. I don’t collect. Not really. I buy art when I can, but calling it a collection feels obnoxious. And that cabinet I have full of bones and skulls and nests, dead birds and dead snakes, that’s not really a collection, at least not yet. Last week it was someone else’s collection I was obsessed with, my friend Billy Jamieson’s. The auction catalogs—“William (Billy) Jamieson Collection”—arrived in the mail for me at Tin House and next thing you know I was spending hours scouring the database of CITES, the UN convention regulating international trade in endangered species, and zooming in on Billy’s butterflies to see if that white one with the red dots really was a Parnassian Apollo, because the auction was happening in Canada, and if I won a lot containing any endangered butterflies, like the Parnassian Apollo, and tried to bring it across the U.S. border—never mind that all the butterflies, Parnassian and otherwise, were collected and mounted on boards nearly two centuries ago—I would languish for decades in a dank Canadian prison.

Okay, probably not, but a hefty fine was possible. Billy once paid one when he tried to sell an endangered curlew on eBay. Then there were the Nisga’a mummies that he had to return to the tribe. They were sitting-up mummies, not lying down, so he seat-belted them in the backseat of his yellow Austin-Healey convertible and drove them to their native home in Western Canada. That was before he bought the electric chair from the Auburn Prison that had supposedly been saved from a fire in 1929 and kept hidden for all these years, but after he acquired the Victorian aquarium made from the rear of a hearse that was so haunted it freaked out his former girlfriend when she housesat . . .

I can’t separate Billy’s collection from Billy and the stories he told about it. Billy died three years ago, suddenly, shockingly, which is why his collection is being auctioned off. That, to me, is tragic, and evocative in its tragedy, and thus I was mooning over the whole idea of collecting when fate introduced me to the Faux Museum where I found other collector-less collections.

Can you feel me right now?

It sucks the happiness out of people.

Reasons why you should get the book:

“You want to hold a shrunken head?” Billy asked the first time I met him. He thrust one towards me. “This guy’s a white guy! So this head is extra valuable.”

Shrunken heads were the first thing he collected, their lips sewn closed with angry stitches. Billy told me it was to keep their spirits inside, because head shrinking was a way of collecting souls.

I met him when I was working on Inventing Niagara. Niagara Falls used to have an old cabinet-of-wonder type museum at the waterfall’s brink. It was the oldest museum in Canada, until Billy bought it. He was by then a dealer in tribal art and oddities besides shrunken heads, and he saw lots of beautiful things at Niagara. To others the Niagara Falls Museum was a joke, a clapped out freak show ancestor to Ripley’s Believe it or Not. Never mind that it was a gorgeous collection of natural history, art and artifacts assembled before the modern taxonomic compulsion turned museums from sites of wonder into encyclopedic mausoleums. No one thought there was anything worth looking at in the Niagara Falls Museum until Billy bought it and sold its Egyptian mummies to an Atlanta museum for two million dollars, then helped them prove that one of them was the pharaoh Ramses I. 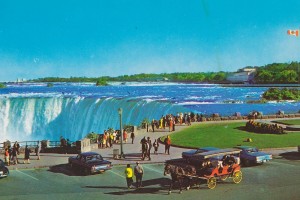 So there are losses within loss here—the Niagara Falls Museum lost, partly subsumed into Billy’s collection, which without Billy, is lost now too.

At the start of a writing project, there’s always a phase I think of as the collecting phase. The phase where Maggie Nelson collected blue objects and blue facts and texts about blue before writing her own collection, Bluets. The phase where Susan Orlean collected stories and histories and biological facts about orchids before writing The Orchid Thief. The phase where Tom Wolfe dressed like a dirty hippie and rode around on a bus with the Merry Pranksters for—god, how long must it have taken him?—collecting experiences before writing The Electric Kool-Aid Acid Test. My Niagara collecting phase lasted for years, and I collected guidebooks and stories and myths and stereoscopic views and postcards and Viewmaster slides and sources, meaning people, meaning at one point, I collected Billy.

Writers are ravens, our beady eyes caught by what’s shiny, our acquisitive claws poised to bear it away.

But the actual collection, the theft if you will, is only step one. The next step is the arrangement, the curiosities cabineted, the shiny facts shaped into story. Collectors do this in person. Walking through Billy’s collection with Billy, drinks in hand, his wiener dog Ramses at our ankles, it sang. It told the story of a curious mind charting its course through a world overflowing with wonders.

The Faux Museum’s collection of collections has an odd funereal feel. There’s no curator of missing socks pointing out favorites, no librarian glossing the notes, no Nova growing her current crop of nails. The collections are haunted by their collectors.

As storymaking, collecting is an oral tradition. When the collector is gone, the collection becomes traces, a shrunken receptacle for soul. The things are never the thing. If there’s enough documentation, enough arrangement, we convince ourselves the collection is still extant, congealed into art, like Homer’s epics, those scraps and fragments spun together and passed down from poet to poet until someone entombed them on a page. They feel like a poem but what they are is evidence, traces of a song that was lost when its singer ceased to sing.

Books are a way of telling ourselves that writing is more than this, though if we are honest, if we let ourselves collect our thoughts, we know this too to be false.

I bought Lot 66, six Victorian lepidopterological cases, each glazed wooden case holding rows of pinned and labeled butterflies. The Parnassian Apollo is not among them. But Billy is. And so is the Niagara Falls Museum. When I hang the cases on my wall, I could call them an epitaph. I could call them part of my collection.

Ginger Strand is our neighbor & the 2014 Tin House Writer-in-Residence at PSU. She is the author of three books: Flight, a novel, Inventing Niagara, the untold story of America’s waterfall, and Killer on the Road, a history of the interstate highway system told through the stories of the killers who have haunted it. She has published essays and fiction in many places, including Tin House, Harper’s, The Believer, The Iowa Review, The New England Review and the New York Times, as well as This Land and Orion, where she is a contributing editor.