When we arrived at the middle of the flower field, I asked my parents if they would help me pluck some flowers, the lavender ones some distance away from where we stopped the car. They were probably actually lavenders, but you wouldn’t know just by looking, and especially not from where I was standing. My parents told me to stay with the car. I had decided to stay anyway. And so I stayed, and sat on top of it.

They looked so delicate, my parents. I told them to be careful and they asked me why I wanted those particular flowers.

“No one else is going to see them if they stay there. I’d like for at least one other person to see them. Beautiful things, those flowers.”

It was a lie, most definitely. It wasn’t even about the flowers. I don’t care for flowers—even in death, I don’t think I’d care for people bringing me flowers. Heck, I didn’t actually say that I wanted the flowers. I had just asked if they would help me pluck them. But they looked so delicate and as they stepped out of the car, I just wondered how much more delicate they would look plucking flowers. That’s why I asked, I suppose. I wanted to see my parents plucking flowers.

I sat atop the car, listening to the wind breathing. It carried my parents’ whispers, their sighs, their hums, their heart. Delicate. They looked so delicate I could have cried and not stopped and the earth would have made up for all the crying with even more flowers. There were so many flowers, but it didn’t look that way, it looked like it could have had more flowers and still somehow look like there wasn’t enough. I bet there were more lavenders that were more lavender than the lavenders that I had in sight, the ones my parents were plucking.

I didn’t tell my parents how many flowers I wanted, but I knew they knew. They always knew. Even when their knowing was wrong. They would think they know. They wouldn’t say anything, that’s certain. They weren’t saying anything at that moment either. They just kept plucking and plucking until they thought I’d be happy. Happy with what exactly, I didn’t know, and neither did they. All by myself on top of the car. I sat and I watched them. One of me and two of them. One of each, and one in union, but two separate persons, much like me. One, each, delicate.

I wanted to whisper to them, “Why?” at which point they would look up and ask me to repeat what I had just said. They would look up, this I know. They wouldn’t go about plucking the flowers and ask me without looking at me. They would look at me. I was looking at them. I looked at their faces. Tired, each different, but both delicate. Like something precious unearthed, with a little bit of dirt that needed brushing off, but clean and ancient and fragile underneath. “What did you say?” one of them would ask and I would tilt my head, feign some amount of ignorance, and let them carry on with their labor. Then I’d whisper, “Why?” again, this time, making the seemingly fleeting inquisition a little bit more weighted so that it didn’t latch onto the wind. This time, just for my own ears. “Why?” I didn’t have an answer to this and I loved the possibility that my parents would have the answers to this big question, each different, but somehow they would agree with each other anyway, very delicately, so it would appear like they’re finishing each other’s sentences. People in love did that a lot, surely.

I accepted, ever so delicately, that this was not true. That my parents didn’t have the answers to a lot of things, to “Why?” Too delicate to hold all the world’s knowledge in one lifetime. And that is fine. Being delicate. The flowers, my parents, sitting on top of the car, the wind, plucking  the  flowers, lavender  as  a  color, as a flower, we’re all so delicate. And I accepted that the wind would eventually sweep everything away anyway, delicately and definitely and “Why?” would not matter too much. At this moment, my parents were plucking flowers and I was watching them.

Plainly, I just wanted to tell them that it was okay, that the flowers were enough, that, finally, I was going.

But my words never could come out delicately enough when it came to speaking my heart. My words, they cry and they crush, and through the tumult, my words get lost and wrecked, and my parents are so delicate, I had no heart to speak. So I kept my heart. I kept my delicate heart from my delicate parents and I didn’t say a delicate word. I didn’t speak at all.

Muhammad Amirul bin Muhamad is a Malay Singaporean student currently pursuing a degree in mass communication. He enjoys writing stories and listening to others when they tell him theirs. On his personal blog, Spinning Stop, he writes about a variety of things, including depression, love, nebulous apparitions, sex, and crying babies, among others. 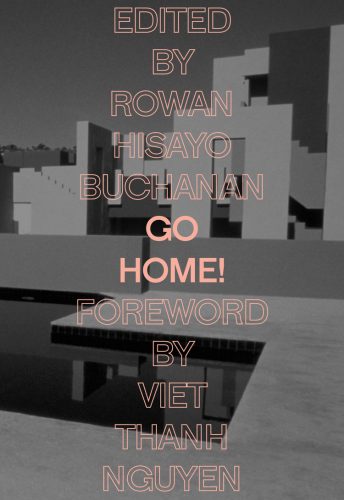 In the anthology Go Home!, from the Feminist Press and the Asian American Writers Workshop, Asian diasporic writers imagine “home” in the twenty-first century through an array of fiction, memoir, and poetry. Both urgent and meditative, this anthology moves beyond the model-minority myth and showcases the singular intimacies of individuals figuring out what it means to belong. Established in 1991, AAWW is a national not-for-profit arts organization devoted to the creating, publishing, developing and disseminating of creative writing by Asian Americans through a New York events series and online editorial initiatives.

The Open Country of a Woman’s Heart

Where They Were Not