Joshua Jelly-Schapiro—acclaimed geographer, writer, and adventurer—is the author of Island People: The Caribbean and the World (Knopf, 2016) and co-editor, with Rebecca Solnit, of Nonstop Metropolis: A New York City Atlas (University of California Press, 2016). His essays and criticism have appeared in The New Yorker, Harper’s, The Nation, The Believer, and many others. Lucky for us, his latest travels brought him to the nonstop metropolis itself, and he slowed down just long enough to write a letter.

Joshua is the latest author to participate in Dear Reader, our collaboration with Ace Hotel New York. As this month’s writer-in-residence, he spent one night at the Ace Hotel in Manhattan, where he penned a letter to an imagined audience of strangers. What he wrote has been kept secret until today, when it will be placed bedside in each room. We caught up with Joshua to talk great letters from the Caribbean, turning off the internet, and remaking the map. 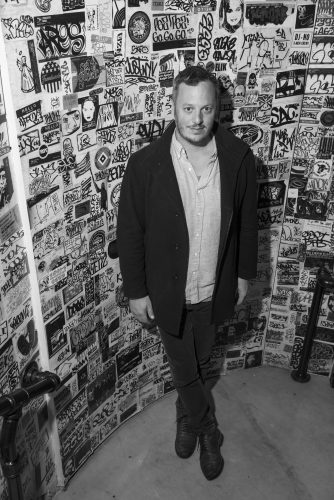 JOSHUA JELLY-SCHAPIRO: The writer whose letters I read and re-read as I was writing my book on the Caribbean was C.L.R. James. James was a remarkable figure—born in Trinidad, he was a historian and a novelist and political radical who also loved radio serials and cricket tests and film noir. He was a powerful, early celebrant of how the Caribbean islands have shaped modern culture everywhere. He wrote what’s still both our best book about the Haitian Revolution and maybe our best book about sports—and thousands of marvelous letters, too (many of them to his American wife Constance Webb). I’ve probably spent more time reading James’ letters than anyone else’s save for Patrick Leigh Fermor. Leigh Fermor was a very different figure from James. He was this great British travel writer, a kind of wandering bon viveur—but as erudite and pleasing an observer and exegete of place, and of human scenes, as I know (and a great lover of the Caribbean, too, in his outmoded way). And he, like James, was everything you could hope for in a correspondent: erudite, energetic, surprising, funny. Those two, along with Jamaica Kincaid, were probably the writers whose work I dwelled on most while writing Island People. Would that I rocked up once by the quayside in say, Martinique, to find a letter from James or Paddy telling me I was on the right track—or getting it all wrong. But alas.

I studied geography in school and I love maps to an unreasonable degree, so maps are always on my mind. I think any effective piece of prose, whether an essay or novel or short story, implies a good map; all good maps, by the same coin, tell stories. But I don’t think I’ve ever been able to fully map out anything I’m working on before I’ve written something first. As soon as I have some stuff down—a glimpse of the landscape—I will often draw up an outline, a shape for the piece, that I can then fill in. But I think that one of the really exciting and terrifying things about writing is that you don’t really know the territory, or what you want you want to say about it, until you get it down. You’ve always got to be open to remaking the map as you go.

While I’m working on something, I often imagine how certain people will read it—my editor, a certain friend or peer, my mom. I find it quite impossible, though, to think of “audience” in the abstract. Which is to say: I am always surprised by people who’ve read my work. The healthiest way to publish anything is to let it go—to not worry unduly, once it’s left your hands, about its “reception,” or reviews or anything else. Of course having your work recognized or praised is nice; of course it can sting when people you respect point out its failings. But everything you write, once you’ve made it as good as you can, will have a life you can’t control. All you can reasonably hope for, I think, is that it will find some people—whether 100 of them, or 100,000—who connect with what you were trying to do. Anytime you’re lucky enough to encounter one of them, well: joy.

One book that I’ve given to friends again and again as a gift, which I suppose suggests I’d like more people to know about it, is Elizabeth Hardwick’s Sleepless Nights. It’s a strange and kind of unclassifiable book, in the way many of the best ones are—an essayistic memoir (memoiristic essay?) that Hardwick published as a novel. I love it for the shape of her sentences, her mind’s oblique sharpness, the evocation of place: it remains one of the best books I know about living in a city, and about New York.

In 2018, though, I suspect the book I’ll be pressing on more people than any other is a book by my friend Suketu Mehta, which I just a read a chunk of in manuscript, and which comes out in the fall. It’s called This Land is Their Land and it’s basically about how migration makes the world go ‘round—and about how immigrants, far from “stealing our jobs,” are this country’s best hope. Suketu is one of our great narrative journalists—his book Maximum City is another masterpiece about urban life—but this new book is less about chronicling individuals’ complex stories than it is about a larger issue facing us all. It’s a book, given some of the evil idiocies to which we’re being subjected these days, that’s as necessary as it is timely. And Suketu writes like a titan. Look for it.

Coffee is a hell of a drug. So is turning off the internet. When I’m starting to work on something, I do so anywhere—on the subway, in bed, buying a toothbrush at Walgreen’s. But when it comes time to actually finish up, to turn the scribbling into something with an aim and a shape that might, if you’re lucky, grow bigger than yourself—well, at that point, as someone said: you’ve got to be alone with the work. 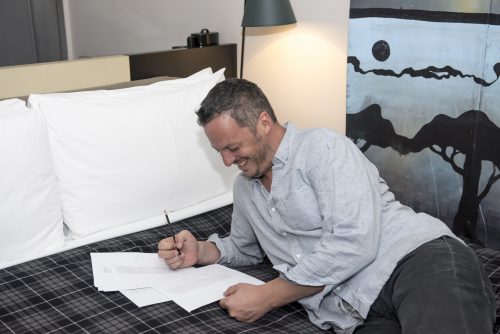