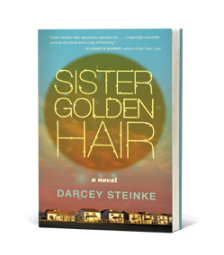 Elizabeth Gilbert: This is not just a story about a young girl’s coming of age, this is also the story of a particular era in American history, and what it did to families and community. You’ve described it as a time when adults sort of checked out, or allowed themselves to check out. I feel like you viscerally capture the seventies in such a powerful and disturbing way; that decade itself is almost a character. What is it about the seventies that drew you to writing this book?

Darcey Steinke: I think the decade you come of age in and the people you come of age around confound and fascinate you your whole life. For me that decade was the seventies. The seventies are often depicted in a superficial way—tube tops and bong hits—but I remember it as a dark time when the people I loved and looked up to, particularly women, seemed filled with an inarticulate longing. In the seventies people were caught in unique conflicts because of shifting ideas of family, gender, religion. I wanted to write Sister Golden Hair partly to witness to some of the struggles of the seventies characters I knew.

EG: Feminism is an interesting theme in your novel. Your mother, my mother—the mothers of most of my friends—got, in a way, sucker punched by it because they had achieved everything they believed they had been raised to achieve. They were just at this place of feeling—maybe not happy, but satisfied because they obeyed the edicts and had a house and two kids. And then suddenly there were these voices saying: “You’re a slave. You’ve got to have your own identity, your own checking account.” I think that was a shock that they all handled in different ways. How did you want to broach this subject?

DS: I’ve always felt that my mother was not unlike Willie Loman from Death of a Salesman, someone who time outpaced, someone who became outmoded. My mom was raised to be a traditional fifties housewife, but because of the sixties and the changing roles of women, she had the rug pulled out from under her. She never really got over this shock. In later years she even joined a support group called “Displaced Homemakers.” The sad part for me is that because of the social shift, my mom resented what she viewed as my freer life. In Sister Golden Hair I wanted to portray a mother conflicted, a character who, rather then embracing liberation, rejected it, while all the time longing for change.

EG: I’m interested in the hunt for glamour that all these women have in the novel, but in different ways. The mother is really interested in the Kennedys, and the Kennedys are so out of reach. Sheila wants to be a Playboy bunny because she thinks that’s glamorous. It was a different kind of glamour, but equally tragic to be in this duplex dreaming of either the Kennedys or Playboy bunnyhood. They’re equally distant. And Jesse, too, becomes obsessed with glamour. Was glamour something that’s always interested you?

DS: My father is a minister and my mother was a beauty queen. I have always been interested in the intersection of divinity and glamour; I consider glamour a sort of secular divinity. For Sister Golden Hair, I wanted to write about what happens when religious divinity recedes. Jesse’s dad, who is also a minister, has been thrown out of his church, and the family leaves the safe environs of the rectory and the church and moves into the material world. I wanted to track Jesse, without God, as she searches for someone or something to worship. Big glamour in small towns feels very far away—you mention the Kennedy’s and Playboy bunnies—but there is also a small time local glamour that gathers around sexuality, violence, drugs, and money.

EG: In the same vein, throughout the book, Jesse and her friends are in pursuit of glitter, and glamour, and transcendence. She gets up early to do her hair “just so.” She needs that armor, she needs that defense, and all of that is about transcendence and about ascent. And at the end of the book, I was amazed by that baptism. It’s the most glamorous thing a young girl can do, to surrender to something so fully. And Jesse never got it. Jill does in that moment, and that’s what brings people to religion I think. But it’s a real rock star moment when that happens—you are the center of the universe. Why doesn’t Jesse get there?

DS: I envisioned Jesse in this book like a medieval journeyman passing through different spiritual stages. I know it sounds crazy to compare a seventies teenager to Dante, but I did use The Divine Comedy, particularly The Purgatorio, while working on this book. The novel, rather than having a traditional arc, moves through phases. In adolescence, your friendships demark time, whom you hang out with and what you learn from them, before you move on to the next stage, the next friend. Dante too, moved through different planes trying to learn from the people in each space. Jesse, in Sister Golden Hair, moves through the pages in a similar way. I was less interested in transcendence for her; I wanted her to resist all the traditional traps for young girls—glamour, sex, religion—to take it all in but, in the end, still be her own person.

EG: When the novel begins, Jesse is twelve. What I thought was a cool and strange moment in the book was Jesse’s fascination with being a babysitter because it gives her time to look at her own body. It’s the only unmonitored time that she has. It’s not that she’s looking for the vibrator in Sandy’s drawer—she’s counting her own pubic hairs. And it was so interesting that that’s what she’d use that time for—that was the most important thing. It is sort of the first time you’re alone, when you’re babysitting . . . I admired how much you focused on that and didn’t dance around it. What is it about twelve?

DS: Babysitting is such a fascinating space. You are not the parent of a child, you have not set up house, but for the hours you babysit, you are a stand-in adult, a placeholder. It’s exciting, scary, odd. I think there are so many violent babysitter urban myths—the intruder on the phone upstairs, etc.—because it is a liminal place, a space where you’ve been let out of your adolescent world and temporarily given the responsibilities of an adult. There is a lot of anxiety for parents, children, and babysitters. I wanted Jesse to use her hours of babysitting to explore her changing body, as you say counting pubic hair, because her changing physicality is the nexus of the novel. I think twelve is a dark and mystical age. You have had one body, and then like a transforming creature in a science-fiction film, things erupt out of it—black hairs, breasts, pimples. I, for one, remember twelve as both disturbing and surreal.

Darcey Steinke is the author of the memoir Easter Everywhere (a New York Times notable book) and the novels Milk, Jesus Saves, Suicide Blonde, and Up Through the Water (also a New York Times notable book). With Rick Moody, she edited Joyful Noise: The New Testament Revisited. Her books have been translated into ten languages, and her nonfiction has appeared in The New York Times Magazine, the Boston Review, Vogue, Spin, The Washington Post, the Chicago Tribune, and the Guardian. Her web-story “Blindspot” was a part of the 2000 Whitney Biennial. She has been both a Henry Hoyns and a Stegner Fellow and Writer-in-Residence at the University of Mississippi, and has taught at the Columbia University School of the Arts, Barnard, The American University of Paris, and Princeton. She lives in New York City.

Elizabeth M. Gilbert is an American author, essayist, short story writer, biographer, novelist and memoirist. She is best known for her 2006 memoir, Eat, Pray, Love, which as of December 2010 has spent 199 weeks on the New York Times Best Seller list, and was also made into a film by the same name in 2010.

It’s the Disregard of the Natural Landscape that Proves Man’s Intelligence: An Interview with Ken Kalfus