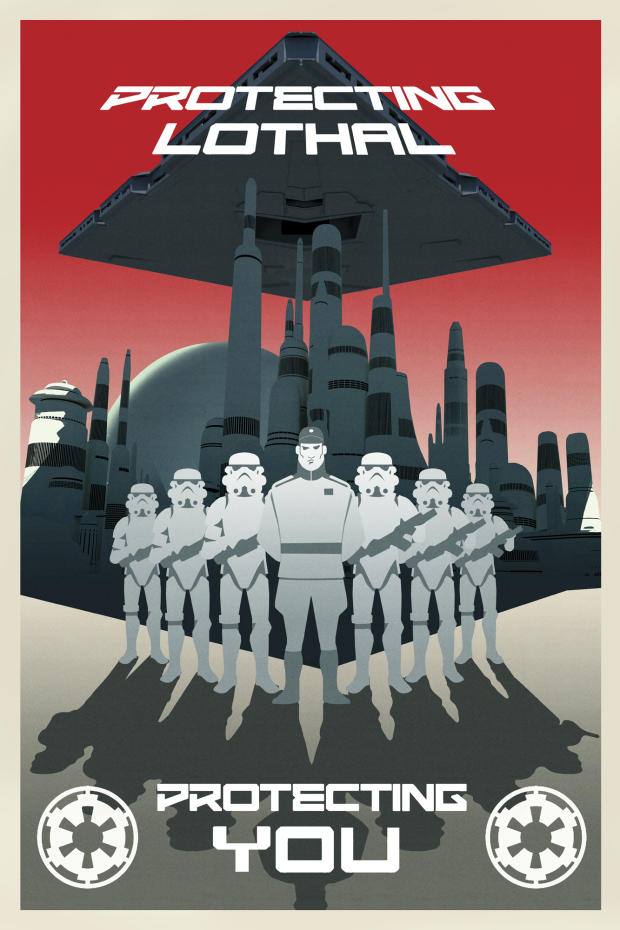 In his 1941 essay “Epic and Novel: Toward a Methodology for the Study of the Novel,” the Russian literary critic and philosopher M.M. Bakhtin cited three elements that distinguish the epic from other forms of storytelling. These distinctions came to mind last week when a mysterious and elaborate—and, it would turn out, aesthetically beautiful—package arrived at my door. The jet-black envelope read, “Commission for the Preservation of the New Order.”

Inside, I found the following announcement:

“It is by Imperial Decree that you are requested to proudly display these posters on behalf of your Empire. As loyal residents of one of the Empire’s most vital stations on the Outer Rim, your compliance is appreciated. Imperial Service is a noble endeavor which paves the way for your freedom and security.”

“Remember, it is the will of Emperor Palpatine to ensure the future of a stable and prosperous galaxy.” 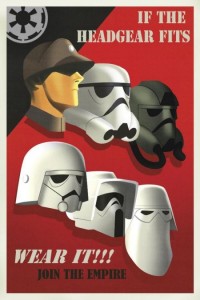 I was one of 2,500 people to receive this package—and apparently to get conscripted into the evil Galactic Empire from Star Wars.

The mailing is intended to publicize the new animated series “Star Wars Rebels,” set to launch in the fall. It came with six stunning postcard-sized images reminiscent of WWII-era propaganda. One features an image of silhouetted star destroyers and TIE fighters and reads, EXPLORE THE GALAXY…JOIN THE IMPERIAL NAVY. Another says, LEAD THE WAY JOIN TODAY with a picture of a new villain, the Inquisitor. “Rebels” will be set between Episodes III and IV, presumably during the construction of the Death Star , and will represent the Walt Disney Co.’s first Star Wars production.

You may recall that, in 2012, on the day before Halloween, the Walt Disney Co. spent $4.05 billion to purchase an entity known as Lucasfilm, the production company responsible for making such films such as Labyrinth, Willow, and Mishima: A Life in Four Chapters and for launching successful subsidiaries such as Industrial Light and Magic and Pixar Animation Studios. Most notably, of course, Lucasfilm is the brainchild of director/prophet George Lucas, creator of the Star Wars franchise. This is how media empires rise and fall: via the exchange of staggering sums of cash. Sic semper tyrannis.

For those of us of a certain age, the two words “Star” and “Wars” when placed side by side in that order will always refer to the movie Star Wars released in 1977 and later rechristened Star Wars: Episode IV – A New Hope. That movie had a profound effect on my entire childhood—I was six when I first saw it—and it continues to inspire my entire creative life to this day. I’ve written elsewhere about my love for Star Wars toys and right now Admiral Ackbar is hanging out on my writing desk. It’s a trap! For the sake of clarity, however, by “Star Wars” I am here referring not just to that first movie, but to the entire Lucasfilm/Disney Empire of films, toys, video games, TV shows, sleeping bags, books, &c. The Imperial Forces wallpaper made by the San Francisco-based design company Super7 is particularly glorious. I’m currently installing three rolls in my downstairs powder room.

In purchasing Lucasfilm, the Disney Co. has acquired one of the defining creative enterprises of our time. On the New York Stock Exchange, the Walt Disney Co. trades under the abbreviation DIS. Shares are currently going for around seventy-five dollars. Dis, it should be noted, is also the name of the city—guarded by furies and fallen angels—at the burning heart of the inferno in Dante’s Divine Comedy. The coincidence is ponderous. Yes, the Walt Disney Co. has earned its share of criticism over the years, rightly so, but it remains capable of some truly visionary projects and I look forward to seeing what it does with Stars Wars. I contend that the $4.05 billion price tag will prove to be a bargain and, furthermore, that the real rewards will end up being not only financial, but also artistic. 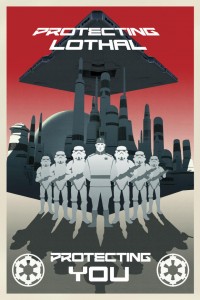 Bakhtin has written, “The epic as a genre in its own right may, for our purposes, be characterized by three constitutive features: (1) a national epic past—in Goethe’s and Schiller’s terminology the ‘absolute past’—serves as the subject for the epic; (2) national tradition (not personal experience and the free thought that grows out of it) serves as the source for the epic; (3) an absolute epic distance separates the epic world from contemporary reality, that is, from the time in which the singer (the author and his audience) lives.”

Reading this, I can’t help but think of the world-building that has gone into that galaxy far, far away. That the Star Wars universe continues to expand is only good. (Mind you, there’s a schism brewing between the Expanded Universe and the official Star Wars canon, but that’s a topic for another day.) I can’t think of an ongoing creative enterprise that better fulfills Bakhtin’s definition of the epic. Until the new films hit the theaters in late 2015, I’ll have the ongoing series of Stars Wars books and, soon, “Rebels” to tie me over. Based on these early Imperial illustrations, it’s going to be epic.

Andrew Ervin is the author of a collection of novellas, Extraordinary Renditions. His debut novel Burning Down George Orwell’s House is forthcoming from Soho Press. He lives in Philadelphia.