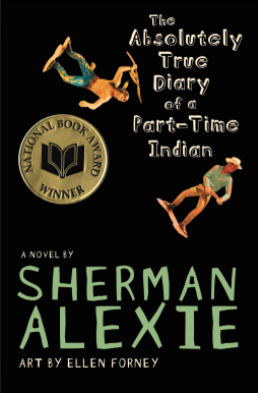 American Indians make up only 1% of the United States population, but faux images of us abound in pop culture. From Pocahontas to Tonto to Dances With Wolves to the use of cartoon faces of Indians as mascots, inauthentic portraits of Native people fill the big and small screen, and were once common in books. Fortunately, there’s a growing body of literature written about Indians by Indians, all with the power to transport readers into the real world of Native people. As a citizen of the Caddo Nation of Oklahoma and a former practitioner of federal Indian law, I know how much our lives are shaped by the histories of our tribal communities and the federal government’s laws and policies regarding tribes and Indian people. The full and authentic representation of Indian people—the good and the bad, the tragic and the hopeful—is represented in the incredible poems and stories written by Native people today.

If you’re interested in reading kickass fiction, poetry and memoir that leans experimental and incorporates myth, traditional stories, and non-linear story structure, take a look at the following books. The first four include authors you may already be familiar with, and the following eight are writers you’d do yourself a favor to get to know. Because tribal citizenship is important to Indian people, I’ve included each author’s tribal affiliation.

The Absolutely True Diary of a Part-Time Indian by Sherman Alexie (Spokane Indian): No list of American Indian fiction, short stories or poetry would be complete without Sherman Alexie, whose work has the ability to make most people laugh and cry – often on the same page. Of everything he’s written, The Absolutely True Diaries of a Part-Time Indian, an autobiographical Young Adult novel, is probably my favorite. In it, he tells the story of Junior, a cartoonist and basketball player growing up on the Spokane Indian Reservation. When Junior leaves his troubled reservation school to attend an all-white farm town high school (where the only other Indian is the mascot), he must confront race, class, death, and the strong pull of “home” — all the while struggling to exist in two worlds. (Side note: Alexie is a must-follow on Twitter; he’s snarky and irreverent and will have you falling out of your chair with laughter.)

The Round House (P.S.) and Love Medicine (P.S.) by Louise Erdrich (Turtle Mountain Band of Chippewa Indians): Two novels by Louise Erdrich are particularly special to me. The Round House, which won the National Book Award for Fiction for 2012, follows 13-year-old Joe, an Ojibwe Indian residing on a reservation in North Dakota, in the aftermath of his mother’s brutal rape and beating by a non-Indian on land near the tribe’s ceremonial grounds.  It’s a gripping novel with vivid and original characters, and is considered one of Erdrich’s most accessible novels. It’s a coming of age story about love, justice, family, culture, and history.

Love Medicine is Erdrich’s first novel and was originally published in 1984. The book explores 60 years in the lives of Ojibwa Indians living on the Turtle Mountain Indian Reservation in North Dakota. A different character narrates each chapter, and the large array of characters and their familial connections can be a dizzying but beautiful experience. Thankfully, Erdrich includes a family tree at the beginning of the novel, which aids the reader in keeping track of the array of characters and familial connections. Themes include cultural identity, the impact of federal Indian policy, and Native spirituality.

: This is the story of Joy Harjo’s journey to becoming a poet and musician. In it, Harjo guides the reader on a non-linear path through myth, mirth, and survival, from pre-birth to Harjo’s salvation through poetry and art. Harjo structures the book using the American Indian concept of “four directions,” common among a number of tribes, and which symbolizes the totality of the universe.  East represents the direction of “sunrise” and “beginnings”; North, the direction of “difficult teachers” and “cold wind”; West, “the direction of endings”; and South, where “release,” “fire” and “creativity,” are found.

Harjo writes, “I believe that if you do not answer the noise and urgency of your gifts, they will turn on you.”  She begins writing poems, and uses them to survive the panic, alcohol, monsters, and dreams that threaten her existence.  “It was the spirit of poetry,” she writes, “who reached out and found me as I stood there at the doorway between panic and love.”

Ceremony by Leslie Marmon Silko (Laguna Pueblo): Ceremony, published in 1977, was the first novel by an American Indian woman to be published in the United States. Set on the same Laguna Pueblo reservation where she grew up, this novel is a wonderful mix of Pueblo myth, spirituality, and imagination. It tells the story of Tayo, an army veteran who returns to his reservation after World War II. Silko takes the reader through Tayo’s journey from drinking away his sorrows and rage towards his Indian past as he fulfills his quest to cure himself of mental anguish and bring rain back to his community.

When My Brother Was an Aztec by Natalie Diaz (Fort Mohave and Gila River): “I write hungry sentences,” Natalie Diaz once explained in an interview, “because they want more and more lyricism and imagery to satisfy them.” Diaz achieves this and more in her debut book of poetry, a 2012 Lannan Literary Selection and a 2013 Pen/Open Book Award shortlist. In it, she experiments with form, from couplets to parts, lists to prose poems. Her poems include a diabetic grandmother without legs, a brother returned from Iraq and suffering an addiction to crystal meth, the families that are torn apart by war and bigotry towards American Indians, and the landscape of the reservation. Formerly a professional basketball player, Diaz now lives at home, on the reservation, where her day job is preserving the Mohave language.

Ledfeather by Stephen Graham Jones (Blackfeet Nation): The Ledfeather, set on the Blackfeet Indian reservation, follows the life of one Indian boy, Doby Saxon, through the eyes of the people in his community who witness it, and the boy’s connection to an Indian Agent who served the U.S. government over a century before. Told by multiple narrators and in a disjointed structure, the book demands focused and intelligent reader. Ultimately, it’s a story about life, death, love and the power of a single moment. This book is the coolest I’ve read in a long time because of the way that Jones meshes the two storylines. In addition to books on American Indians, Jones also writes experimental, horror, crime and science fiction.

The Hiawatha by David Treuer (Leech Lake Band of Ojibwe): David Treuer’s second published novel, The Hiawatha, is about an American Indian family who migrate to Minneapolis in 1961 as part of the federal government’s relocation program, which was designed to move Indians from reservations into urban areas, with the goal of assimilating them into the dominant culture. It’s a portrait of one Ojibwa family’s struggle with poverty, violence and racism, and the quest for the American dream. Treuer’s sentences are exquisite, and the backdrop of relocation is an important historical component that affects Native people to this day.

Perma Red by Debra Magpie Earling (Confederated Salish and Kootenai Tribes of the Flathead Indian Reservation): Published in 2002, Perma Red is set during the 1940s and focuses on Louise White Elk, a character modeled after Earling’s own aunt Louise, and the people of the Flathead Indian Reservation who are constant in her life. The story, told in alternating perspectives and in first and third person, blends past and present, memory and perception to create a dreamlike quality that many, including Sherman Alexie, have compared to Leslie Marmon Silko’s Ceremony.

The Dance Boots (Flannery O’Connor Award for Short Fiction) by Linda LeGarge Grover (Bois Forte Band of Ojibwe): The Dance Boots, published in 2010, is a collection of linked stories about an Ojibwe community grappling with the legacy of Indian boarding schools, the preservation of indigenous traditions in a changing society, alcoholism, violence, and the beauty of family. The book won the 2009 Flannery O’Connor Award for Short Fiction and the 2011 Janet Heidinger Kafka Prize. It’s an important piece of work, and showcases the profound disruption that the boarding schools caused in the lives of many Indian people.

Mean Spirit by Linda Hogan (Chickasaw Nation): Mean Spirit is set in Oklahoma during the oil boom of the early 1920s and focuses on two Osage Indian families, the Blankets and the Grayclouds. It opens with the murder of Grace Blanket, owner of oil-rich land. The killing is the first of many, as white men try to steal the Indians’ oil-rich land and personal fortunes. Mean Spirit reads like a thriller (with elements of magical realism) but achieves so much more: it is an exploration of the consequences of the U.S. government’s assimilation policies towards American Indians and the atrocities committed against them, while U.S. officials looked the other way.

Shell Shaker by LeAnne Howe (Choctaw Nation): Shell Shaker, winner of the 2002 American Book Award, interweaves two tales of murder involving Choctaw political leaders, one in the mid 18th century and the other in 1991, both connected through the Billy family. The title comes from a Choctaw ceremony in which a “shell shaker,” a female dancer with empty shells tied around her feet, dances and prays to spirits to carry out a request. Themes of family, connection to land and spirits, and the circular notion of time and nature permeate this beautiful novel.

Night Sky, Morning Star (00 Edition) by Evelina Zuni Lucero (Isleta/Ohkay Owingeh Pueblo): Night Sky, Morning Star is the story of a family: artist Cecelia Bluespruce, a successful sculptor and potter, who is secretly troubled by dreams and shadows of her past; Cecelia’s grown son, Jude, who seeks the father he’s never known; and political activist Julian Morning Star, imprisoned twenty years for a crime he did not commit. Set within an Indian community, it’s the familiar story of family reconciliation, but it’s also a reflection on unresolved historical trauma that will cling to the reader long after the book has been read. Night Sky, Morning Star is the winner of the 1999 First Book Award for Fiction from the Native Writers’ Circle of the Americas.

Shelby Settles Harper holds a Juris Doctor from the University of Colorado, a Master of Arts in Writing from Johns Hopkins University, and is a citizen of the Caddo Nation of Oklahoma.  Her work can be found in Outside In Literary and Travel Magazine (March 2013), Bethesda Magazine (July/August 2013), So to Speak: a feminist journal of language and art (November 2013), Defying Gravity: An Anthology of Washington, DC Area Women (January 2014), and Gargoyle Magazine #61 (2014). Shelby lives with her husband and three children in the Washington, D.C. suburbs, where she writes for the parenting blog Red Tricycle about family-friendly adventures in the nation’s capitol.