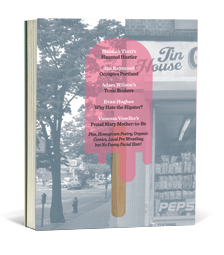 Elissa Schappell: What was the inspiration for your design?

Amy Martin: I knew I wanted make an image that would clearly differentiate Portland from Brooklyn, and I’m also really drawn to the greenness of Portland. It’s one of the reasons I moved here from LA last year. Portland feels like a city barely carved from a forest that could at any second reclaim it. Portland is also a huge biking city. Racing bikes, tall bikes, art bikes, unicycles, fixies – bikers travel in massive flocks through the city. 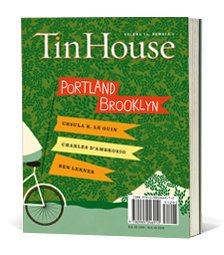 ES: So how long have you lived in Portland?

AM: I’m new here – I just moved last June from Los Angeles – and I’ve never felt so welcomed into a new city as I have in Portland. The creative scene is comfortable, unpretentious, and eminently welcoming. Even though most of the work I did here my first year was solitary, I set up office hours with friends in coffee shops, and we all worked on our projects together. It helped so much to be around other people who were warm and engaged and open – especially since I was coming from a busy newsroom environment. People I barely knew would call to see how I was doing – it feels like the best parts of the midwest (where I’m from) with a creative economy. Finally, I think Powell’s and Forest Park has a lot to do with it also – Portland is a city of ideas and imagination because it has as its center a city of books and is surrounded by a spectacular wilderness. That’s a pretty magic combination.

ES: Why is Portland such a great place for creative types to live?

AM: The cost of living is a big part of it. Rent is low, you don’t need a car to live here, and the city is small enough that you can do a tremendous amount of exploration on foot. It’s hard to feel isolated here because the city is so well-planned and neighborhoody. The city also isn’t built for social stratification  – at least in the creative community. I moved here from Los Angeles, where, for the most part, the most successful residents lived high up in the inpenetrable Hollywood Hills. Portland is much more integrated socioeconomically, and so struggling musician/baristas can have access to and happy collaborative relationships with Grammy winners because everyone just mixes together much more easily.

ES: What was the inspiration for your design?

Michael Fusco: I really wanted to have the poster feel like Brooklyn without feeling cliched.  So much imagery of what you see in relation to Brooklyn has to do with the bridge or water towers or whatever.  I wrestled with it for a while and thought of the idea of using a bodega.  So, I went to a nearby corner and took a picture of my local bodega, and played with it a little in Photoshop.  And since I knew the issue would be coming out towards the end of summer, I felt the popsicles really illustrate what we’re all craving during this time–ice cold treats.

ES: How long have you lived in Brooklyn?

MF:  I’ve been here on and off for a little more than 10 years.  Currently, my wife and I live in a little known neighborhood on the other side of Prospect Park called Prospect-Lefferts Gardens.  It’s quiet and wonderful.

ES: Why is Brooklyn such a great place for creative types to live?

Amy Martin has created books, magazines, products and illustrations for a whole bunch of organizations and groups including Obama for America, The New York Times, The Walt Disney Company, Death Cab for Cutie, Sufian Stevens, and McSweeney’s. Her first illustrated children’s book, Symphony City, was released by McSweeney’s in 2011 and is so lovely it’ll make you cry.

Michael Fusco, who along with the writer Emma Straub founded M+E in 2005, has designed book jackets for such such biggies as Chester Himes and Peter Straub. The pair has also produced screen-printed posters, record covers and merch for bands like The Magnetic Fields, who they recently toured with (Someone has to work the merch table). To see their work and so much more (Spicy Bacon Caramel Corn!) go to the M+ E website.