I ate at Gabrielle Hamilton’s tiny East Village restaurant, Prune, one time. The meal was good, from what I recall, but my memory is marred by the fact that my husband and I had begun an argument on the way to the restaurant and then, feeling it was too late to cancel, we just slogged through it. I have a vague image of sitting at a small table with my back to a wall, the door to my right and the pass from the kitchen to my left, an egg and maybe some salmon roe on a plate before me, and that is all. Sorry, Prune. You deserved more. 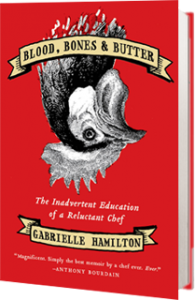 You’d think my memory would be all the sharper in light of my mood that evening: usually I have perfect recall for anything that surrounded a slight or a fight or a dig, especially in the painful and ironic way that you recall a moment of anger that ruins a pleasant dinner, the convivial glass of wine that took a turn. I always feel a bit betrayed and somehow culpable when this is the case, as if I should have known what was coming, and somehow prepared for it.

I’m thinking of all of this as I reread Gabrielle Hamilton’s depiction of her mother in the early chapters of her memoir Blood, Bones & Butter. That section haunts me, and so, equally, does the offhand assertion later in the book that Hamilton had cut her mother out of her life entirely for many years. How, I keep wondering, do we go from these early passages to silence?

“…I sat in her lap after dinner every single night… I leaned back into her soft body and listened to the gurgling as she chewed and swallowed. I breathed in her exhale: wine, vinaigrette, tangerines, cigarette smoke. While all of the others were excused from the table, I got to sit, alone with my mother and father as they finished. I watched her oily lips, her crooked teeth, and felt the treble of her voice down my spine while she had adult conversation and gently rested her chin on the top of my head.”

It’s the childhood physicality of the moment that makes it feel so immediate, the way it captures the last moments when your mother’s body is very nearly still your own. There’s no judgment in it yet, of the body’s scents or its softnesses or sounds. Her body merely is, in perhaps the most familiar and comfortable intimacy that exists short of actually being in the womb. And though Hamilton goes on to describe her mother as the person who shaped her culinary world with everything from raw milk purchased straight out of the cow to dandelion salads and thrifty French stews, it is this early moment that crystallizes the most painful loss in the book.

I’m reading a memoir, so I’m nosy—I want to know what happened to sever that deep connection; I want to know what became of a woman who was a riveting presence before she abruptly disappeared off the page. A memoir writer is not beholden to every reader’s curiosity, but I think this response is a testament to the achievement of those early pages. I can experience that comfiness, the pure safety of the moment, so clearly that it makes it nearly impossible to absorb its departure. Like any lost paradise, it only seems more vivid in retrospect, as you turn the memory over and over in your hand, trying to find the clues to what happened next.